As a fourteen-year manager at Vintage Vinyl in the Delmar Loop, it would be hard for Matt Harnish not to have an impressive record collection. Venturing to the comfy nook that is his bedroom/record room, any collector would go green-eyed gazing at his 3000-plus LPs. When not scouring thrift stores for choice albums, Matt performs with hometown heroes Bunnygrunt, the group he co-founded with long-time drummer and current bassist Karen Ried in 1993. He is also preparing to release an archival recording of St. Louis' first all-girl punk group The Welders on BDR Records, the label that he co-owns with Jason Rerun. We caught up with Matt and discussed his hunt for ultra-rare Wee Willie Shantz records before he had an 11 a.m.(!) band practice:

LCS: I've got to start by asking what's with the early band rehearsal? That's not your typical rock & roll hours. Matt Harnish: When most of your band are bartenders, that's the only time you can do it. [laughs]. It's sort of a different kind of brain-weariness, as opposed to 11 p.m.

When did you start collecting music? I started buying records, oh, probably when I was fifteen or sixteen. When I was thirteen or fourteen, one of my older brothers gave me about 50 of his old records, and that was a "planted the seed" kinda thing. Two of those records are still among my top ten records of all time: Aerosmith, Toys in the Attic and AC/DC, Hell's Bells.

I don't remember what the first record I actually bought was, but the first cassette I bought was a budget bin copy of Blue Oyster Cult, Fire of Unknown Origin. It was certainly under four dollars!

I do the majority of record buying now at thrift stores and garage sales. I found an amazing, about 60-piece collection of free jazz and modern classical stuff at a thrift store about a year ago. There were like fifteen Anthony Braxton records in it! As a bulk collection to find all in one place, and I got these 60 records all for something like fifteen dollars. That was probably the biggest "score" I've ever made. 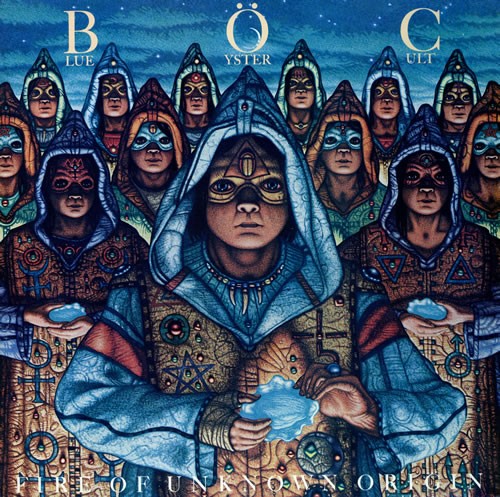 So you would say you pick up more stuff at thrift stores than you do at work? Yeah, in St. Louis at least. When I go to other cities I always hit the record stores. It's one of those things where records you never see in St. Louis are common in other cities. I was in Columbus, Ohio, in December, in a really cool record store, and they had all these awesome KSHE classic records in the 99-cent bin. I got all these awesome Sweet records. They were in the 99-cent to two-dollar bins, where in St. Louis they are much more sought after. Then, they had silly stuff, like Michael Stanley band records, that we have a ton of. They had [them] for like 15 dollars. I love that there is still some regionalism in record stores.

Is it a common misconception with record buying that people have a skewed perception or what is valuable and what is not? Some do. Some don't. People always assume that Elvis Presley records are worth something, and they just aren't. There are one or two, or five out of the thousand Elvis records that are worth a bunch, but nobody has those.

In the last year, everyone thinks Thriller is worth a hundred dollars. It is a record we sell in the store for ten or fifteen dollars if it is in immaculate condition. People really want to make big bucks on Michael Jackson. [laughs]

With 3000-plus records, and having worked at Vintage Vinyl for 14 years, are there records you still want but have never come across? Oh yeah. There are tons of records I'm still looking for. I don't buy records online, because I like the thrill of the hunt. I've chipped away at my wish list, but there are definitely things still on it. There's a band from England from the early '80s called the June Brides that I have all their CDs, but don't have the records. At some point I will find the records -- but again, I've seem 'em online all the time, and that's no fun.

I should say there is one record I am looking for by this ice cream truck driver in north city in the early '60s who put out a few novelty 45s called Wee Willie Shantz. I would love one if someone wants to give me one (laughs). He put out these kids rockabilly 45s that are incredibly creepy and outsider-y. I've heard the songs online, but I would love to own them. He would sell the 45s out of his truck to kids. It's creepy songs about barnyard animals and he would be playing banjo and making animal noises. The craziest thing you've ever heard. From the viewpoint of a band, do you still think it's viable to put out vinyl records? When Bunnygrunt first started, we released a couple 45s. We were getting a little bit of attention in various magazines and stuff, and we were getting calls from label scouts. Somebody called Karen and asked if we had a CD we could send them. She said "No, we only have records." The scout person told her "I don't even own a turntable," and Karen said, "Well, we probably don't want to sign to your label then." [laughs]

It might have been incredibly snotty, but it pretty much summed it up. We're in it for the thing. The artifact. The cool. We're not in it to move units. We're in it to create little works of art. That kind of sums up the 45s really well. Like on our first record, we hand-painted all the b-sides.

Personally, I don't even have an iPod. I understand that world exists, but I don't tailor music towards it. I like the fact that a record is more than just the songs on it. The record is the statement, or vision, or whatever. I do like the new trend of the LP with the digital download card. Even CDs I've always seen as much more disposable. Records, I've probably sold less than 20 back in my entire life. [laughs]

If it's only twenty, do you remember any that you actually sold back? There was this mid-'80s SST band called Angst. I really loved one song, and I found all the records and bought them all, but most weren't very good. [laughs]

Are you excited for the third national Record Store Day? I think it's an awesome thing. I am generally positive about it. I think there is a little bit of weird speculators that come in to buy the releases not because they like the bands, but because they think these releases are going to go up in value. I don't buy records that I don't play.

There are certainly people who come in to make an investment on these records, but that's a very small percentage. They're gone after the first fifteen minutes. Most people come, though, because they are into what we are doing, and stay the rest of the day. That's awesome!

Are you willing to go on record, then, and say the LP is not dead? The LP is far from dead, despite major labels trying to kill it by putting out 30-dollar Hootie and the Blowfish records. [laughs]