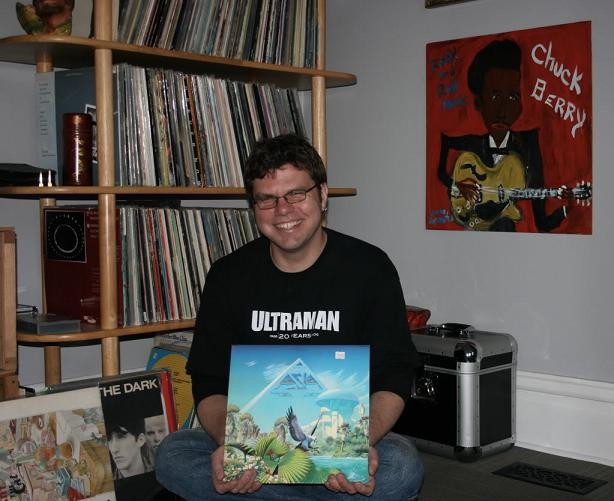 Ex-RFT writer Thomas Crone is the host of the Silver Tray on KDHX (88.1 FM). Every Friday from noon until 2 p.m., Crone spins everything from classic rock to new wave. He doubles as a DJ at the Royale (every fourth Friday of the month) and at the Schlafly Bottleworks (every fourth Thursday). When he's not playing music, Thomas is an adjunct professor at the school of communications for Webster University and the founder of creativesaintlouis.com. His massive, odds-and-ends collection encompasses everything from Zot records from the '80s and a unique collection from the local Gaslight Square jazz label Norman. We caught up with Thomas in his record room just after he finished coaching his elementary school soccer team.

LCS: How long have you been a record collector? Thomas Crone: Oh, I guess I started collecting in my mid-to-late teens. I didn't have an older brother or sister to turn me on to stuff, so I didn't start when I was twelve, which always made me jealous of other collectors. [laughs] I specifically remember the first record I bought was Hall & Oates, Rock 'n Soul Part One, and maybe a Chicago record. Could've been Chicago X or XI? I wasn't buying Black Flag or anything "cool." It was pretty standard issue stuff. Actually, the first record I really remember was Al Stewart, Year of the Cat. That was the first record around the house that I played.

After collecting now for the better half of your adult life, what is the prize piece of your collection? I think I have a fair number of local 45s from the '90s. So, as a collection, I feel pretty good about that. Bands like Plaid Cattle. Stuff that people aren't necessarily remembering that well. A lot of stuff I was into collecting when I was between 21 and 25.

So what is the guilty pleasure of your collection? Zot.

Zot? [laughs] They were a band that had one song that got MTV rotation in the '80s called "Uranium." It's kind of an odd new wave vinyl (the cover features a neon drawing of the stone head from Easter Island). Or, Art In The Dark, produced by Mitch Easter [a producer best known for his work with R.E.M. in the '80s]. That's one that comes from the compulsion of collecting. If I see something produced by Mitch Easter I'm going to buy it.

Have you ever actually listened to Art in the Dark? I've listened to it in part, but it didn't really sync with me. [laughs] In your live sets or on the air at KDHX, how often do you mix in this type of stuff? I would say on the radio I lean a little bit more on listener friendly... a little bit more. I'm lucky enough that the types of places I DJ don't pressure me to get people up dancing. So these types of odd records I could slip in occasionally at the Royale.

What's the oddest request you've ever received? There was this guy at the Royale who was the singer in a REO Speedwagon cover band. He had a recording of a live set with his band that he wanted me to play. I kept trying to put him off, and put him off, because I didn't know what type of quality the recording was. That was pretty strange, but he was an extremely nice guy.

Do you have any final words on your collection? As a record collector, the best thing anyone has ever said to me, or maybe in any capacity of life, was at Whizz Records in Columbia, Missouri. I did the thing that most people do at record stores, where one minute I'm at one corner and the next minute I'm in another corner searching for records. When I finally went to ring out, the clerk said to me, "You sure know your way around a record store!" [laughs] Thanks!