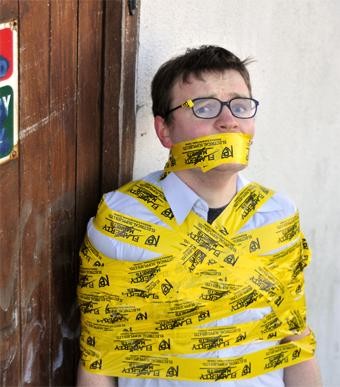 At a day party on the last official day of SXSW, aggressive, garage punk filled the small confines of Trailer Space Records. Sharing the bill with the likes of West Coasters Thee Oh Sees and Nodzzz, Ireland's So Cow breezed through their ninth SXSW appearance with just enough time for a few words before packing up the van for the next show. We caught up with sweaty lead singer Brian Kelley, who performed at Antarctica last Wednesday, March 24, along with Brooklyn's Sisters. (This interview was inadvertently not posted last week; did anybody go to the show? How was it?)

You've been plenty busy this past month playing shows on the west coast but you're about to take off in earnest on a national U.S. tour in the next couple days. Isn't this your first tour to pass through the Midwest? What are you most looking forward to? This will be our first U.S. tour to go east of San Diego and west of Indianapolis. After being in Austin for five days I'm excited be on the road again and visit a new city each day.

What have you enjoyed most about SXSW this year? The people and bands that I've meet or got to see again along the way -- Christmas Island, Fungi Girls, White Wires, etc.

Who is your favorite band to cover? '70's Korean folk/funk artist Kim Jung Mi. I've already done a couple covers, but maybe one day I'll cover an entire album and put that out.

If you're shopping for vinyl, what genre are you most likely to checkout first? Punk

In three words, how would you describe your own music? Fast, warm, pop