For the uninitiated, the Lemp Neighborhood Arts Center is a smallish, non-profit venue that's all-ages and alcohol free. There's no stage, so there's no fourth wall, and it's the kind of place that artists love to play. "This is a very special venue for us," Xiu Xiu frontman Jamie Stewart said last night at the venue. Brandon Benjamin Schurr, the lead singer of Br'er, also thanked the Lemp, saying "This is one of the best places to see and hear live music in the country." 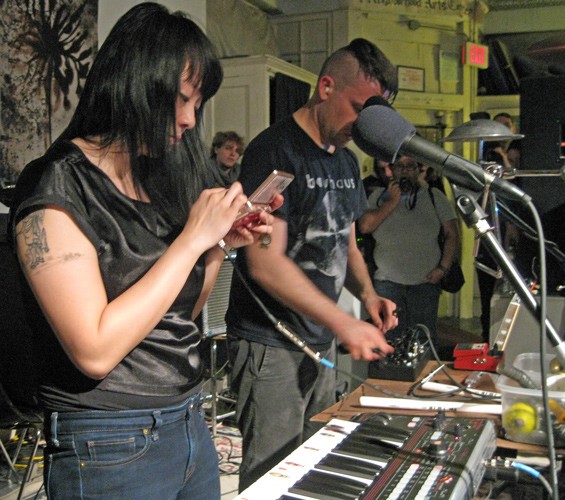 tUnE-yArDs' Merrill Garbus got the crowd moving with her reggage-laced, lo-fi sound. Her set was easily the most accessible of the night--a pleasant departure from fellow opener Talk Normal's energetic thrash and the force of nature that was Xiu Xiu. She didn't have much by way of equipment, just her powerful voice, two drums, two mics and a ukulele. She looped her vocals on one mic while kicking out sunny beats on the drums.

Garbus charmed the crowd with her laid-back attitude, admitting toward the end of a song, "I almost burped in that one." She didn't sweat it when the crowd vocally filled a few missing caterwauls, saying, "Y'all are too good at singing this stuff...wanna be my back-up singers?!"

Xiu Xiu was polished to perfection. Anyone who digs noise -- but thinks they hate Xiu Xiu -- would have been converted after this set; it was soul-crushingly intense and beautiful. Frontman Jamie Stewart handled guitar, vocals, some percussion and most pedals with bandmate Angela Seo on keys, synth, effects, gongs and cymbals, drum machine and, get this, Nintendo DS. Yeah, that's right -- a pink Hello Kitty Nintendo DS.

Stewart was predictably excellent, but Seo seriously deserves her own comic book series and action figure. The woman didn't mess around; she was in near-constant motion, gnashing keys and beating the motherloving hell out of the cymbals and gong in perfect time. (Evidence: By the end of the show, I had chips of drumstick in my hair.)

Xiu Xiu played for about an hour, tearing through a lot of new material off its 2010 album Dear God I Hate Myself, including "This Too Shall Pass Away," and "Gray Death." They didn't play much of the standard Xiu Xiu catalogue, presumably because Seo is new to the group and what she brings to the table is more than worth hearing.

Cleverly tucked in the middle of the set was the crowd favorite "I Luv The Valley OH!," which at first was barely recognizable over the feedback and drum machine. But once Stewart started singing, it was like hearing your favorite song in the middle of a blitzkrieg. They closed the set with "Boy Soprano," from 2006's The Air Force.

The pair moved in sync with one another and the equipment, but Stewart's trademark forced-quiet vocals were all but lost in the swirling industrial rips and sonic tears of the percussion, which pulsed like a thrombosed vein from start to finish. Before Xiu Xiu took the floor, someone in the crowd said "This is going to be awesome." He wasn't wrong.