In the late '90s and early '00s, Chad Elvins ran Lepers TV, the local-access show which filmed tons and tons of St. Louis concerts. (Some of the national bands they filmed: Deftones, Far, Helmet, Clutch, Faith No More, Mr. Bungle, Incubus, System of a Down, Man-or-Astroman, Jesus Lizard, Queens of the Stone Age, Tortoise, Trail of the Dead, Melvins, SOD, Peelander-Z, The Dillinger Escape Plan and Ween. Whew.) Only some of this footage has surfaced on YouTube -- although the good news is, more of it might see the light of day soon. "I gut rehabbed my house slowly over the past few years and the tapes have been in the basement boxed up," Elvins says. "I unearthed them this winter and the plan is to have them on a website -- kind of like virtual library, sometime this year." 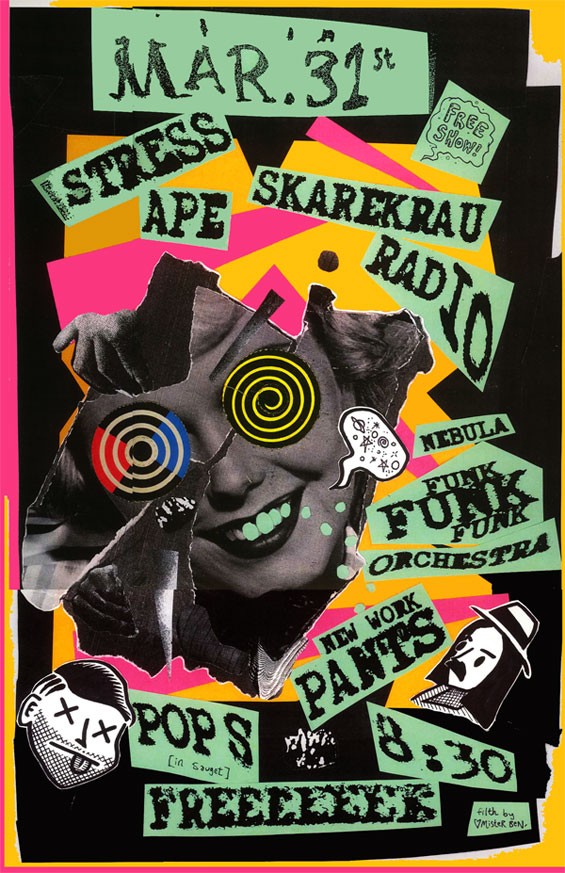 Although Lepers TV ended in 2004, Elvin's kept busy in the last five years filming a documentary on local uncategorizable, lovable weirdos Skarekrau Radio. (This is the second such documentary on the band: Naugacide was released in 2005.) Tonight, he's filming the last footage he needs, at a free show at Pop's. The south St. Louis supergroup Nebula Funk Orchestra -- the newly anointed subject of his next documentary -- is also performing. Doors are at 8 p.m., and it's all-ages. Elvins graciously answered some questions about the film.

You've been working on a movie about Skarekrau Radio for five years. What prompted you to do this in the first place? Why did you decide to do a documentary on them? Chad Elvins: I met them through Chan Mandolin, who helped me rehab my house and was a member of SKR. He invited me out on an East coast tour, or as they call them, Warning Orbs. The more I hung out with them, the less secretive they got and they started inviting me to their rituals and just random weird shit they do. I didn't know half the time what I was filming, but I found it interesting, especially for something happening in the local music scene.

I imagine after five years you have a ton of footage. Describe what the movie is going to be like -- what's the premise? Who have you interviewed for it? This really documents a chapter of Skarekrau Radio's history and is narrated by me and alter egos of myself. I became obsessed with Kricket Greene (singer of SKR) and film the last days of her being in the band and Jason Wallace Triefenbach (local artist) and his wife taking over the singing duties. The show on Wednesday will be the final filming I need of the new line up of singers to show the transgression from JWT.

What about SKR makes them a good documentary subject? The last time I saw them a member got naked and started humping tables in Mangia then got in a fight with another member. You never know what you'll get at a SKR show.

What's the most insane/ridiculous footage you've shot so far? Anything stand out? I filmed so much male nudity that it could turn into one of those drinking games every time you see a wiener in this film. The best was a naked guy crawling into a sewer hole near the abandon Carondelet Coke Plant.

When can we expect the documentary to be finished? Will you be premiering it anywhere/shopping it to festivals/releasing it yourself? Does it have a name? It's called A Time in Tempora (they're from Tempora, Illinois) and I plan on showing it here in St. Louis first. It's very low-brow so it'll be nice if underground film festivals play it.

Tell us about Nebula Funk Orchestra. Why did you choose to start doing a documentary on them? Nebula Funk Orchestra is made up of a lot of people from south St. Louis bands and they are the best party band around, hands down. They have this beach theme to their shows and Wednesday will be over-the-top with this theme.

Anything else you want to add? This show is a one time thing and I doubt you'll ever see NFO and SKR play a show like this again -- especially at Pops!