"Those are plants out there," Buddy Miller said last night, pointing to the Pageant pit where stood 150 devotees, most applauding a maestro of American music. Miller was self-deprecatingly plugging his recent record, Written in Chalk. If he didn't sell more copies this evening that's because many of the 1000 plus in attendance own it and know it, front to back. The concert's sponsor, 88.1 KDHX, has spun it relentlessly.

And if Miller is an American idol to St. Louis' Americana niche audience, his friend, collaborator and headliner Patty Griffin is Lady Gaga.

Griffin doesn't play the river city often, and her last show at the Pageant, three years ago, was relatively sparsely attended. It's not completely clear what's happened between now and then (though a string of cuts for folks like Joshua Radin and Miranda Lambert hasn't hurt), and Miller's presence certainly helped with the draw. The Maine-born, Austin-based songstress was surprised and moved by both the packed room, balcony to back bar, and the shockingly rapt attention (mostly) that greeted the gospel blues-dominated set. She played few of her hits, instead relishing the pilot project of this first night of the tour, and singing her vibrato-rich guts out.

Miller opened solo acoustic, with a Tom T. Hall song, "That's How I Got to Memphis," and then, declaring the "shortest opening set in history" over, brought out Griffin and a dapper rhythm section (bassist Frank Swart and drummer Marco Giovino), who pushed Miller's over-driven, greasy take on gospel rock (Slow Train Coming retooled as a bullet express), with floor tom-heavy pounding and deep, deep doghouse bass thump. Miller, who has a producer's ear and a mad scientist's vision of electric guitars, has developed a singular, aggressive sound, a kind of post-modern country blues that kicks you in midriff and messes with your head. If you don't believe in Jesus (Miller does) you'll have to explain why the Lord is rocking your ass so hard.

From "Worry Too Much" to "Heart of Hearts" -- a Stephen Bruton (the late musician behind the sound and story of Crazy Heart, among other accomplishments) cover -- to "Somewhere Trouble Don't Go" to stunning duets with Patty on "Wide River to Cross" and "Written in Chalk," Miller defines those words we use too much, too uncritically: integrity, depth, soul, and realness. His voice is like a Randall knife cutting cast iron and his guitar playing, especially on "Gasoline and Matches," is a compressed, electrifying history lesson, from Chuck Berry to Richard Thompson. 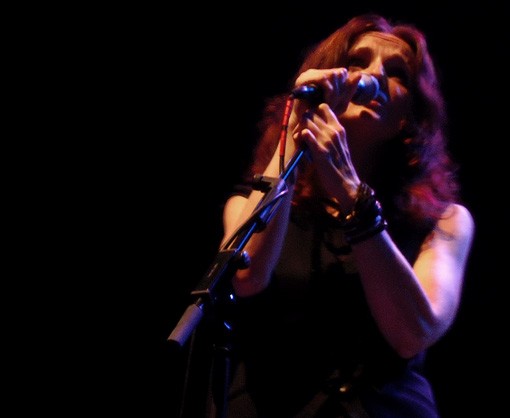 Another word we (critics and fans alike) overuse: transcendence. But the word need not be meaningless and the experience, even in a hall of commerce rather than a sanctuary of the spirit, can be real. That's what Patty Griffin's voice and songs can make you feel. It all seems worth it: your investment of attention and $23 plus Ticketmaster fees; your persuasion of Dixie Chick fans to join you in hoping for "Top of the World" (a hope realized in the encore); your suspension of disbelief in a kingdom of God on earth; your surrender to a gospel that, in the jot and tittle of the law, has done more damage than it could ever heal; and your total, almost physical, absorption in songs that can rip your heart to pieces, they're just that well-crafted and beautiful.

Griffin cuts a slender, modest figure on stage, in knee-high boots, black tights and a grey sweater strung with shimmering black beads. Her flaming hair is a darker auburn, and the lines around her eyes are kind and inevitable. Standing before the rustic Tiffany stained-glass banner image of her 2010 album Downtown Church, she opened with "Standing" from the 2004 album Impossible Dream, a song that presaged the complete "lapsed Catholic gospel" (in the words of her friend Emmylou Harris) turn of Downtown Church, and set the tone for a concept album of a night -- the concept being transcendence needn't be polite, pristine or pure. With a band led by Miller, and supplemented by veteran Telecaster player Doug Lancio (who also gigs with John Hiatt) and understated keyboardist John Deaderick, transcendence is just an unremitting groove away.

Griffin covered most of Downtown Church, shimmying in that Austin-cosmic-hippie-chick way through traditional like "If I Had My Way (I'd Tear This Building Down)," "Wade In the Water," "Death's Got a Warrant," "Move Up," and "Never Grow Old," with a main-set closing "We Shall Be Reunited" especially gorgeous and poignant. The Dorothy Love Coates tune "The Strange Man" was rendered as a funky and playful call and response, with Griffin declaring that a mysterious stranger had saved her life and moved on. The savior needn't be interpreted as the Christ. But even in a 20-song set list defined by the sacred, songs like Leiber and Stoller's "I Smell a Rat" and her own new originals "Little Fire" (inspired, Griffin said, by listening to Dylan) and the as-yet-unrecorded "Free" reminded the audience why they'd come. They'd come to hear a singer and songwriter on the top of a world of music, and to share in a genuine triumph of the soul with her.