Concert Review: Fans Pour Themselves Over Circa Survive at the Firebird, March 22, 2010

The Firebird (2706 Olive Street) has been on a roll this week. Not too many St. Louis rock clubs are selling out back-to-back Sunday (see our Aquabats review here) and Monday night gigs, yet that's exactly what they've managed to do. Last night's capacity-crowd wasn't too crammed, though the Circa Survive fan-contingent showed up early and were buzzing hard on this Philadelphia quintet. 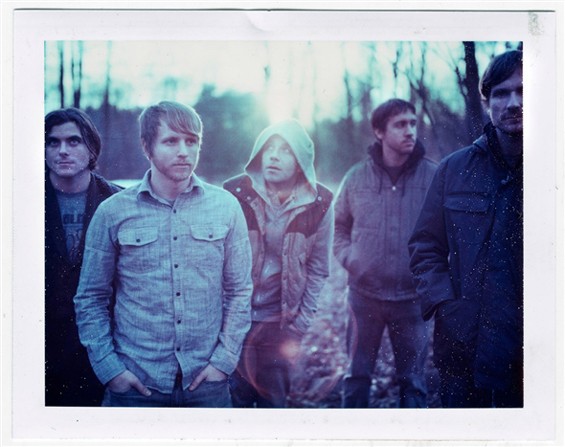 Formed in 2004 after singer Anthony Green abruptly jumped ship from the post-hardcore act Saosin, Circa Survive quickly assembled from a core of Philly musicians who did time in metal-core troupe This Day Forward, and began writing. Now the band finds itself having finished up recording for its newest album and Atlantic Records debut, Blue Sky Noise. They're currently hopping town-to-town, road-testing newbies and banging out oldies alike.

When Green made a guest appearance during opener Good Old War's set, it became clear that the packed house, mostly consisting of college-aged fans, were there for one reason: to pour themselves over the charismatic frontman and get lost in his falsetto howl. After a lengthy sound check that started with playful banter and segued into a limp, albeit jokey, version of Danzig's "Mother," Circa was ready and the crowd even more so.

Catching a band live after they've been holed up in a studio for a while usually translates to good things on stage. You could tell they were eager to showcase freshly written material, all the while in a loose, high-energy atmosphere of the Firebird. Green commanded the stage and bounced around almost more like a flower child than a singer for a screamo prog-core group. At times he'd be spinning around and bobbing his head like he was at a Phish show and simultaneously belting out screams that reminded listeners of Dennis Lyxzén of Refused.

For an album that's not slated for release until April 20, the crowd was certainly familiar -- and receptive -- toward the new material. New songs like "Get Out" had fans screaming the chorus louder than Green, instilling a visible sense of glee to all the band. While the older songs gleaned with twinkling mathy guitar hooks and pummeling back-beats, the new material seems to have taken on singer/songwriter-based core with the traditional prog-rock, Circa-stamped sounds filling out the body.

And while Green may be the ringleader, the band's "strictly business" attitude arguably anchored the show. During more than one break, Green teetered the line between semi-amusing stage banter and annoying psycho-babble (i.e. his "hot girl" discussion and Tourettes-induced profanity-laced barks). Luckily, the band would kick into the next song on queue and have heads banging and fists pumping before they could really even register Green's antics. The bass thumped at sub-zero levels and while there were two different guitar players, they were clearly locked into the same wavelength.

At the end of the day though, it was Green that got through to the crowd more than anyone. In the midst of another new song, he found himself completely hunched over a transfixed crowd as he repeatedly sang/declared, "I can read your mind." And judging by the way he was melting the audience, I found myself kinda believing him.

Show Notes: • Also opening the show were The Firebird Suite and The Christmas Lights, in addition to Good Old War. • Kudos to Good Old War on a very well-received set that consisted of jangly, wide-ranging indie-pop and three-part vocal harmonies. • Opener Firebird Suite is not the same Chris Broach-led (ex-Braid) project from years back. They're some guys from Farmington. • Circa's encore featured a cover of Nirvana's "Scentless Apprentice." Covering Nirvana is a tough row to hoe, but the guys managed to pull it off in an innocuous manner. • Last night's show was a smoke-free environment, which worked out just fine for everyone considering the nice weather. I hope the Firebird folks make this a trend.