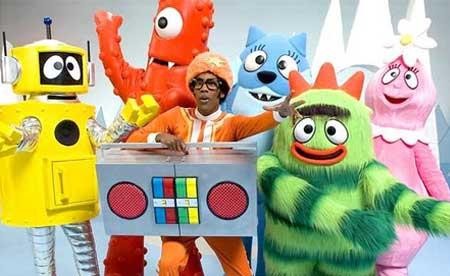 The music and styles of a parents' youth inevitably reappear in the music of their small children. Such is the case with Yo Gabba Gabba! Live! There's a Party in My City!. Almost two decades after rave culture's underground beginnings, it's been modified into the colorful, kid-friendly romp we knew it could be without ecstasy.

The second show at the Fox Theater on Sunday, March 21 began with a burst of techno and giant-sized video of the show's human star, DJ Lance (aka Lance Robertson) projected on a giant screen. His video shrinks to match DJ Lance as he struts through a hidden door in the screen, soon joined by costumed characters Muno, Plex, Foofa, Brobie and Toodee.

For the next 80 minutes, the crew creates a post-modern variety show with a techno soundtrack, trippy sketches, a blend of live-action interacting with large-screen animation, and explosions of confetti and balloons, all punctuated by the pulse of hand-held multicolored light sticks throughout the audience.

The fast-paced show featured song and sketch combos well-known from the Nickelodeon television show, such as "Don't be Afraid." Despite the amped-up electronic soundtrack, the songs maintain a poppy sing-a-long calm that blends well with the high-energy over-stimulation of the lights and dancing.

DJ Lance remains nimble and graceful, brimming with energy through the show. If he ever grew tired of the pace, or being in character, he didn't let it show.

A staple of the television show, the Super Music Friends Show features musicians performing a song. For the live version, the crew remains tight-lipped on who's going to appear in each city. It's not much of a surprise when the Aquabats take the stage, since they played The Firebird later that night, and their leader Christian Jacobs co-created Yo Gabba Gabba!. Instead of performing a song written for the kids, the blue crusaders tore up "Pool Party," imploring the parents to get up and jump.

Later, the Dancey-Dance segment stayed local with vocalist/dancer/Akoya Afrobeat member Kemba Russell leading the group in the Peanut Butter Stomp. In a career revival no one expected, rapper Biz Markie's a staple with Yo Gabba Gabba!, teaching his Beat of the Day. Parents with babies and toddlers lined both sets of stage stairs for the chance to instruct their children in the art of beatboxing. He charmed the crowd with his gentleness and skills. Before he began, Biz called DJ Lance onstage, breaking the Gabbaland mystique by announcing Lance's homecoming to St. Louis to much cheering from the adults in the crowd.

After an hour of costumes, bubbles, balloons, confetti, dancing, lights, and techno -along with an intermission - the show concluded with it's ever-popular "There's a Party in My Tummy," complete with a dancing chicken leg, slice of cheese, and vegetables that weep from neglect. For a moment I think I'm reliving a hallucination I had in 1992, but no, it's all the product for vivid imaginations of the children in the audience, not for the parents who might have lived a different version of this in the past.

After the goodbyes, DJ Lance remained onstage, breaking character to gush about his St. Louis hometown, giving props to the likes of Marsha Mason, Redd Foxx, Ike Turner and Michael McDonald to a standing, cheering audience. The kids might not have understood, but someday, they might.