An Exclusive Excerpt of Steve Almond's Rock and Roll Will Save Your Life, Part One

Austin singer-songwriter/musician Bob Schneider will perform at Blueberry Hill's Duck Room on Wednesday, March 24. To go along with this appearance, we're going to run an exclusive excerpt from author Steve Almond's new book, Rock and Roll Will Save Your Life, which Random House will publish next month. Part one is below; tomorrow and Wednesday, look for parts two and three. 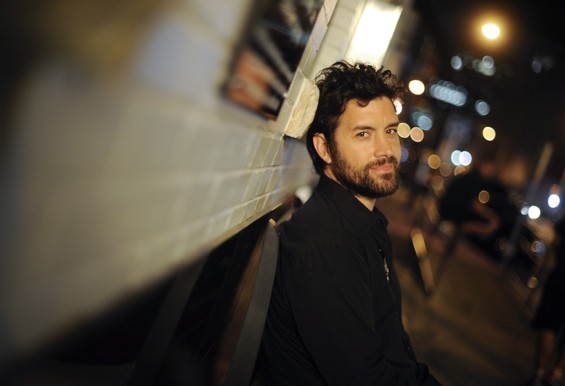 A Frank Discussion of My Mancrush on Bob Schneider I have to start here, because if I don't my wife will eventually read this and say something like, "Aren't you going to mention your massive mancrush?" to which I'll respond, "Shut up! I so totally don't have a crush on Bob!" to which she'll respond, "Then why do you talk to the poster of him on your wall?" to which I'll respond, "I admire him as a musician. Why do you have to make it into something dirty?" Then I'll slam the door in her face and throw myself down on the bed and stare up at my Bob poster, the one with him looking all yummy and stubbled, and wail, "Don't listen to her, Bob! She's just jealous!"

So let me start by noting that every Fanatic is entitled to at least one homoerotic crush, which means, for gay Fanatics, a heteroerotic crush, the point being that there's some musician out there whose talents and manner and physical presence completely jam our normal sexual circuitry.

This all started back in 2002 when I went to see Bob play for the first time. I expected ragged versions of the catchy stuff from his new album, Lonelyland. But Bob utterly destroyed the template. He thrashed his prettiest ditties into punk screamers. He segued from bluegrass to cabaret to drugged-out dub and made everything seem effortless. At one point -- this was during a mambo -- Bob swung his guitar behind his back and sped the time signature. His bandmates followed suit, including the keyboard player, who hoisted a very heavy-seeming electric piano onto the back of his neck. The song became a sweet torrent -- and nobody missed a note.

When it was time for an encore, his guitarist ripped off a Frampton talkbox solo circa 1978, which somehow led to a four-part harmony of "Mercedes Benz" only with guitar riff lifted from "Sweet Home Alabama," though at a certain indefinable point you realized they were playing "(You Make Me Feel Like) A Natural Woman" and none of this, not one note, came off as glib. On the contrary, these covers were entirely devout. Bob was saying to the crowd: Here's where my music comes from. And here. And here.

Though in fact, Bob spoke very little to the crowd. He didn't jump around. He didn't need to jump around. He had his chops to recommend him and his physical magnetism, which was that of a leading man -- Tom Hanks, say, if you drained off the goofiness and retained only the required assets: the jaw, the penetrating gaze, the husky baritone. He knew there was a row of hotties camped beneath him in pushup bras and fellatio dreams. He could hear the frat boys hooting. He recognized the desires and pleasures of the crowd as a condition of his being. I'd never seen such poise. I had no idea who I was dealing with at that point. I didn't know Bob had spent a decade fronting the two most raucous party bands in Austin's hallowed party band tradition, that he appeared to know every song ever written, and to have written half of them himself, that he was (in short) not just a hunky troubadour but a variety of musical savant, the most charismatic and prolific songwriter of our proximate generation, the most fearless and versatile, and certainly the filthiest.

Man Meet Mancrush A passel of label honchos appeared at Bob's next Boston show. The place was mobbed and Bob had shaved for the occasion. During an instrumental break, he walked offstage and wandered over to the VIPs and I remember thinking, as I watched this brief and devastating charm offensive, How can you not make this guy a superstar? He's destroying this club before your eyes. He writes hits in his sleep. He's dating Sandra Bullock -- and he's better looking than Sandra Bullock.

That's not what happened, obviously. The next time I saw Bob, he was hidden behind a thick beard and he played a suite of songs so sad they could only have been the result of dashed love, meaning he and Sandra were splitsville. (Us Weekly had the deets.) Lonelyland had yielded one minor radio hit. The six months he'd spent in the studio trying to produce a commercial follow-up had nearly driven him mad.

How did I know all this? Because it was my job as a Drooling Fanatic to acquire such details. I also did some minor stalking. This is how I discovered, a few shows later, that Bob had gotten married and had a son. I spotted him and his wife pushing a stroller down Commonwealth Avenue several hours before his gig. I startled them by handing Bob a copy of one of my books, which I'd inscribed just in case I saw him. So now he was married. That was cool. It's not like I wanted to marry the guy. What I wanted, as I explained to his publicist, was to spend a week on the road with him. This would allow me to document him writing songs about the colorful folk he encountered and jamming with his killer band and (last but not least) poolside escapades, meaning, in the greater interests of rock and roll, sunbathing in the nude together and doing bumps of coke off the greased pubic bones of teenage virgins. His publicist suggested a brief interview at his home as perhaps more realistic.

On the morning of my interview, I woke with my gut in knots. I was in the Houston airport, waiting for a flight to Austin. The sky kept spitting threads of lightning and then, I shit you not, hail started to fall, making an eerie ping-sizzle on the roof of the terminal. My head was stuffed full of bad outcomes. The airport would close due to apocalyptic weather. Or no, better, I'd be electrocuted at 37,000 feet. Such are the dark visions that plague a Drooling Fanatic on the brink of meeting his mancrush.

Bob lived west of town, in a development whose ambience suggested a suburban game preserve. I imagined a ranch, acres of rolling pine, a hayloft where we could go to be alone. But Bob's house was small and nondescript. There were no cars in sight. A bouquet of white daisies was rotting beside the walkway. The lantern hanging above the front door was full of dead leaves. I rang the doorbell. Dogs started barking. After several uneasy minutes, two large canines came bounding toward me. Bob appeared behind them, pale and dazed. "I forgot you were coming by," he said.