A Mexico-Based Competitor to SXSW Kicks Off this Weekend

The mammoth SXSW 2010 has competition this year from a new, independent music and arts festival south of the border in Monterrey, Mexico. Called Festival de Musica y arte para todas las Edades -- or simply MtyMx -- the three-day festival lasts Saturday, March 20 through Monday, March 22, and is billed as an "all-ages festival of music and art." (Note: This author helped out planning MtyMx early in the process.)

For a while now, whispers of the well-curated line-up have circulated among music blogs, mainly thanks to its notorious co-organizer, DIY Brooklyn promoter Todd Patrick. In the past several years, Patrick (who's better known as Todd P) has been constantly booking affordable, all-ages shows in various music venues around New York. His shows include national and local artists from a variety of genres and varying degrees of popular and critical acclaim -- but all have a knack for catching the kind of underground artists that will be featured on Pitchfork's "Forkcast" before it happens.

MtyMx -- which P is collaborating on with Yo Garage -- will take place in Autocinema Las Torres, an abandoned drive-in movie theatre, where attendees are encouraged to set-up camp throughout the festival. Todd P has made it very clear that he planned it around SXSW to capitalize on the fact that Monterrey is just five hours from Austin -- a relatively short distance for both bands and festivalgoers to travel back and forth. Organizers have gone so far as to schedule round-trip buses departing from/returning to the Austin venue Cheer Up Charlie's (formerly Ms Bea's). All of Todd P's shows are all ages and affordable, and MtyMx seems to be no different: Three-day passes are $30 and discounted round-trip bus fare are available and can both be purchased in advance.

For the past four years, Todd P has organized unofficial multi-day shows at SXSW at Ms Bea's full of national independent artists (including a strong presence from Brooklyn bands). The line-up for MtyMx has a much more international flavor, with Mexican bands making up one-third of the 78 announced acts. It seems Todd P's intention was to give these native artists a chance to debut to an otherwise hard-to-reach American audience. Each day, approximately twenty-five bands and a slew of DJs will play two different stages with highlights being: Liars, No Age, Neon Indian, Andrew W.K, Dan Deacon, Fucked Up, Los Planteas, and Acid Mothers Temple, to name a few. 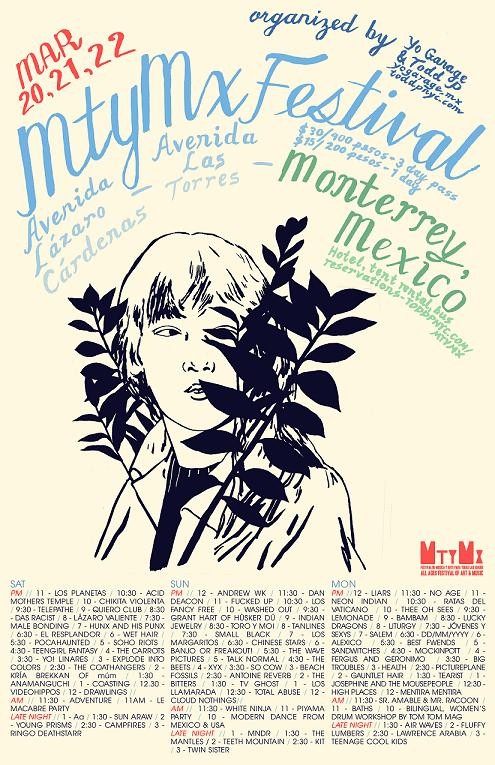 Recently, the New York Times featured a story on MtyMx, in which Todd P denied the festival was a reaction against the current climate of SXSW, but still sought to emphasize: "I've never enjoyed going to big multi-venue festivals. Everyone knows that those bands are going to be playing the worst set of their lives. Everyone's drunk, you never get any sleep the whole time, and it's all networking and schmoozing. It's a necessary evil, but afterwards you kind of want to wash it out of your hair."

MtyMx strives to create a kinder, gentler festival experience sans music industry types for both audiences and bands alike but has recently faced criticism over logistical concerns. As reported in that same NYT article, in February the United States State Department issued a travel alert for Americans in Mexico, citing rising violence along the border as the reason. Todd P has quickly dispelled these concerns, and highlighted the great opportunity this is for American bands to quench middle-class Mexicans' thirst for American indie artists -- while support Mexican artists and challenging American tourists to experience Mexico outside the confines of a resort.