Big Star/Box Tops legend Alex Chilton's sad, unexpected death continues to reverberate throughout the music industry. Tributes are pouring in, from the LA Times and Rolling Stone to the NY Times and basically the entire SXSW music festival. 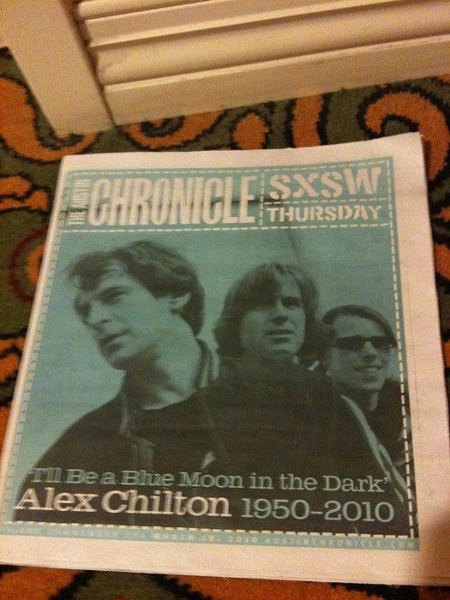 Big Star's last St. Louis show was in October 2006, at Taste of St. Louis, of all places. This morning, a friend reminded me that Big Star's first reunion show after a two-decades-plus hiatus took place in Columbia, Missouri. The 1993 show is immortalized on the album Columbia: Live At Missouri University, and showcases a Big Star line-up featuring Chilton, drummer Jody Stephens and Posies members Jon Auer and Ken Stringfellow on guitar and bass, respectively.

On the album's Amazon.com listing, a fan named S. Clayton Moore -- who says he was a student at Mizzou at the time-- gave some more background about the concert:

The show was organized by MU's student radio station, KCOU, very nearly by accident. The station already had booked Alex for the annual Springfest, again organized by KCOU, and somebody there said - "Hey, wouldn't it be funny if.." and history was made with a couple of calls to Jody Stephens, Alex, and the Posies.

We were outside in a tent, of all things, because the Hearnes Center was booked with, if I remember right, a Bryan Adams concert. There couldn't have been 200 people in the tent, either. As always, it was a great performance by the best unknown band in the world. Alex was in fine form, and was a treat to see during his waking hours, versus some of the darker shows I've seen him do. And it was the only time I've seen him perform Chris Bell's work, which was nice.

This account was corroborated by a 1993 Chicago Reader story about the reunion:

A pair of enterprising students at the University of Missouri in Columbia have apparently pulled off the concert coup of the year--a Big Star reunion. The April 25 show will include leader Alex Chilton and drummer Jody Stephens; they'll be backed up by Jon Auer and Ken Stringfellow of the Posies. The show was put together by two staffers at campus radio station KCOU, promotions director Jeff Breeze and general manager Mike Mulvihill. "Mike and I were talking about it, so we just gave Jody a call," reports Breeze. "I'd heard that he worked at Ardent [the Memphis recording studio]. He said sure, if Alex would do it, snicker snicker. But we called Alex at home and he said sure, too." The show will be part of a daylong lineup of eight bands outside the campus's Hearnes Center, running from 9:30 to 7:30 on Sunday, the closing day of the school's annual Springfest.