Founding member of X, a benchmark Los Angeles band that redefined punk in the 1980s. A solo career that has stood astride country and rockabilly and folk rock. In person, an ideal combination of sweetness and light. And, as a working Hollywood actor, bartender at the Double Deuce in Jasper, Missouri. Next to John Doe's resume, just about everyone seems squarer than robot shit. 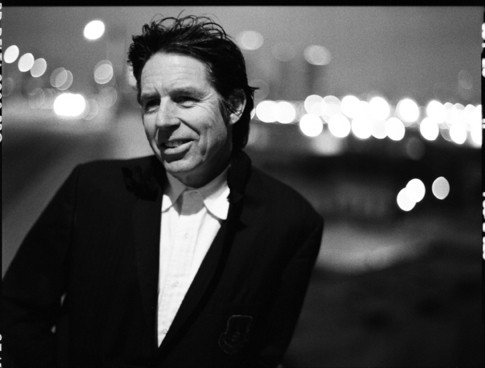 So it was at Off Broadway for a predictably efficient show that offered a tour d'horizon of his albums, a clutch of covers, and requests "of anything I might remember." When last he visited St. Louis, he played with Dead Rock West in a suburban kitchen. This time, the crowd numbered the same (maybe less), but last night he was all by his lonesome, thrift-store suited and cowboy-booted. His mostly acoustic 22-song set telescoped some of best solo songs ("Mama Don't," "Hwy 5," "The Golden State") together with classics (Merle Haggard's "Silver Wings"), Knitters-era material (encore-closer "The Call of the Wreckin' Ball"), and truck-driving X versions ("Poor Girl"). There were also a couple from Country Club, his recent Countrypolitan-meets-Bakersfield collaboration with the Sadies.

Over the years, Doe's subjunctive songwriting has been uneven (though always interesting), but his voice has rarely mucked up a syllable and has remained his greatest asset. It's just as magnetic in concert, located squarely between wet sandpaper and mashed potatoes, gravitas and insouciance. Hard to define but essential: It's like that appealing smell you can't get out of your sweater. For as already headlocking as "Twin Brother" is, the abracadabra of his voice last night gave it empathy so acute that it was almost paralyzing.

That voice issues from a personality that's long been allergic to self-caricature or the vaporings of earned achievement. He's that uncle you never had, assuming that you see Tom Waits in the same way. While some songs lacked frission ("A Little More Time," "Lean Out Yr Window") without the animating clangor of other musicians, his constant wisecracking more than compensated.

His preface to Joni Mitchell's "A Case of You" was especially revealing. "Probably one of the greatest love songs ever," he said, teasing it. "I didn't write it. People have the wrong idea about punk rock ... punk rock [only] set out to destroy shitty songwriters." Then, with the sidelong glance of a mortician entering a casino, he called it a "litmus test" for potential boyfriends of his daughters. Good grief. Let he who has hunched over a record player listening to Blue with John Doe be retrieved from the sanatorium.

"I haven't been writing too much lately," he said at one point. "I've been too happy." An old punk not addled by anything but a sense of humor, and proportion--we should all be so lucky.