SXSW is the Kentucky Derby of American music festivals. It's a quick race to the finish for up-and-coming bands to test their might and merit against their fellow musicians and friends -- all while enjoying as much free beer as possible. Here's a look at five of the favorites who have a chance of breaking at SXSW this year -- and earning opening slots for sweet, sweet headlining tours.

Sleigh Bells Sounds Like: Its tunes range from bombastic bass heavy hitters that could catch a dance floor on fire to breathy, Blow-like slow-pop jams. (Yes, they too are also a female-fronted boy/girl duo.)

Listen To: "A/B Machines" Odds of Breaking: 95% Why they will break: Besides being added to the line-up at the Levi's Fader Fort -- the SXSW venue/party known for its tastemaking qualities -- Sleigh Bells has had two thumbs up approval from Pitchfork, Stereogum and New York Times over the past six months. The duo will follow up its SXSW debut by going on tour with Major Lazer and then Yeasayer; in fact, you'll have a chance to see if Sleigh Bells lives up to the hype when its open for the latter band at the Gargoyle on April 26.

Best Coast Sounds Like: Easy breezy lo-fi pop hailing from Los Angeles Listen to: "That's the Way Boys Are" and "When I'm With You" Odds of Breaking: 90% Why they will break: Best Coast -- which is also referred to as the adorable nickname Besty Coasty -- already reigns over the lo-fi indie music kingdom as its Queen Bee. Recent appearances on KEXP and at the Beverly Hills Bloomingdale's confirms that the act's front woman, Bethany Cosentino, is writing and recording straightforward, sunny pop that's also unapologetically accessible. Currently she has two 7" releases available on Group Tightener and Dean Spuntz's PPM, and later this year will be releasing her debut LP -- probably on some awesome label. 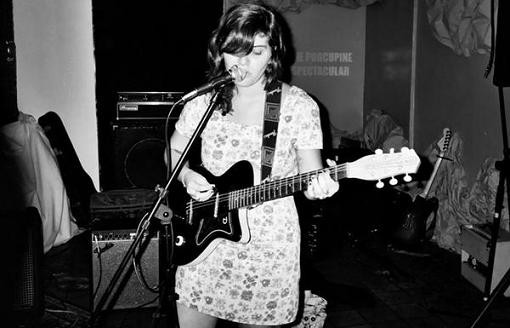 Javelin Sounds like: Clever, experimental Providence, Rhode Island, DJs with an appreciation for 8-bit Listen to: Javelin's remix of The Very Best, "Julia (Javelin Re-do)" Odds of Breaking: 80% Why I have my doubts they'll break: David Byrne's world music label, Luaka Bop, will officially be releasing the Brooklyn duo's No Mas April 6 and it's easy to see that this pairing shares a common interest in playing with the idea of "world music." A strong musical and visual purpose clearly drives this pair of cousins, but the parts are greater than the watered-down sum. Live, the buzzworthy Brooklyners use enough electronics to make a submarine and are somewhat entertaining -- but overall, felt ho-hum, if last December's gigs were any indication. With a slew of shows in Austin and beyond (they'll be opening for These are Powers and Yeasayer, too) Javelin has hopefully tightened up their live knob-turning -- err, performance. Avi Buffalo Sounds like: Endearing, unpretentious musings of an incredibly self-aware eighteen-year-old singer-songwriter, backed by quirky acoustic guitar, keys, shakers and handclaps. Listen to: "Summer Cum" and "What's In It For?" Odds of Breaking: 97% Why they'll break: Sub Pop is slowly redeeming itself this year. First there was the release of Happy Birthday's self-titled release and now there's Avi Buffalo's self-titled album (out April 27) over which to salivate. With a beautiful Daytrotter session behind them and a jam-packed SXSW schedule -- highlights include playing the Sub Pop/ Hardly Art Showcase and Mess with Texas 4 -- there is nothing these four high school wunderkids can't do. You'll be hearing much more about front man Avigdor Zahner-Isenberg's prodigious songwriting later this year, when Sub Pop delivers the goods in April and Avi Buffalo graces the Sasquatch! Festival.

jj Sounds like: Dark Swedish electro-pop washed with casually delivered vocals reminiscent of the xx Listen To: The Lil' Wayne cover of "Ecstacy" Odds of Breaking: 94% Why they'll break: jj is all the rage and poised to be this year's Swedish breakout. The band's rise to fame has been meteoric -- and short: The duo released its first single on Swedish based Sincerely Yours in early 2009, and earlier this year announced the release of its latest, jj Nº 3, on Secretly Canadian. These native Swedes have much in common with Sincerely Yours labelmates Air France and Memory Tapes, but coolly enhance the combination of twinkling electro-pop and hazy vocals, making its music is dreamily affecting. jj's elusive tendencies have left their Stateside audience eager for more, so their upcoming, first SXSW will simultaneously mark their highest-profile American appearances -- and a debutante-like coming out.