The St. Patrick's Day season is officially upon us: Beloved Irish punks Flogging Molly performed at the Pageant last night. And even vocalist Dave King's sore throat (which rendered him rather hoarse) and problems with Matt Hensley's accordion couldn't dampen the enthusiasm of the band or the sold-out crowd.

Flogging Molly's 2010 appearance wasn't all that different from the band's 2009 stop at the Pageant. With no new studio album to support (the act's latest, Live at the Greek Theatre, arrived in stores last week), the setlist contained fan favorite after fan favorite: streamlined punk singles ("Drunken Lullabies," "Requiem for a Dying Song"), amped-up banjo-punk ("(No More) Paddy's Lament") and fiddle-laced punk jigs ("Swagger," "The Lightning Storm"). Occasional respites - the stripped-back "Rebels of the Sacred Heart" and "The Worst Day Since Yesterday" and a brief acoustic set highlighted by "Wanderlust" - were a welcome break from the frantic tempos. And "Float" continues to be one of the best songs Flogging Molly's ever recorded, a majestic, building tune that fomented massive pogo-ing from the pit and band by its end.

Irrepressible front man Dave King bounded around the stage like a gigantic cuddly Leprechaun -- swigging Guinness, jigging, strumming his guitar and even high-stepping with glee, when he discussed Northern Ireland's recent peace entreaties. His beloved mother earned a mention (she's turning 89 this year, but still greets him with "200 cigarettes and a bottle of Jameson" as soon as he deplanes in Ireland, King said) and his sense of humor was intact: "Speaking of bad..." King began at one point, before stopping himself and saying, "Oh Christ, I sounded like Bono, didn't I?"

But the show was quite a bit looser than normal - and not always in a good way. "The Worst Day Since Yesterday" and "Requiem for a Dying Song" felt frayed at the seams, while "Wanderlust" and much of the middle part of the set dragged. Perhaps King's throat problems threw everybody else off, or maybe tour fatigue was settling in; the band has been on the road for weeks now, after all. And of course, even Flogging Molly on an off night is better than 95 percent of bands at their best - and the raucous, jovial crowd didn't seem to notice.

England's Frank Turner contributed a rollicking, fantastic 45-minute set. Although he often plays solo, the full-band incarnation -- playing its last show of the tour -- enlivened his music. Shades of Flogging Molly certainly appeared in the cheerful, Pogues-y music, but more often Turner's tunes had the feel of a punk Okkervil River -- or the Decemberists, had they grown up in a pub instead of in the library. Songs such as "The Road" and "Once We Were Anarchists" especially benefited from this arrangement. But Turner has range and depth that goes beyond "punk poet" or "cheeky British commentator." "Sons of Liberty," which Turner prefaced with the quotable quip, "I'm so pissed off, I'm going to play a guitar solo. We can smash the state with the power of fretwork," had the acoustic-seared political edge of Billy Bragg. "Poetry of the Deed" had a raucous Sloan/Hold Steady vibe that matched its lyrical gem: "Life is too short to live without poetry." And "Reasons Not to Be an Idiot" - introduced as a song about "an annoying goth ex" - could have been a Smiths song, it was that strummy. 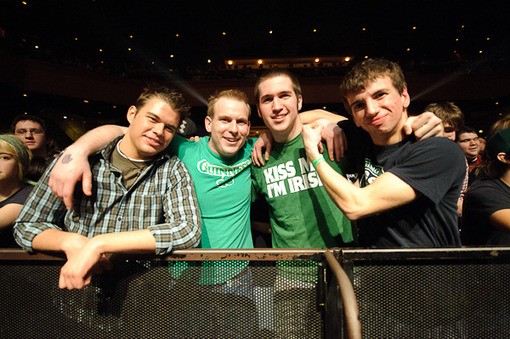 Turner's conversational tone went over well with the crowd. He revealed that he finally learned how to pronounce "St. Louis" correctly - and earned great applause. During "Dan's Song" he invited a fan onstage to play harmonica. (Jacob, the chosen one, did well enough to crack Turner up.) For the final song, "Photosynthesis" he invited Flogging Molly accordionist Hensley onstage, and then extended to invite to anyone else who wanted to join in the revelry. Members of the opening band, Architects -- and others -- took him up on the offer.

Flogging Molly setlist (please help fill in the blanks!): "(No More) Paddy's Lament" "The Likes of You Again" "Swagger" "Requiem for a Dying Song" "Every Dog Has Its Day" "Worst Day Since yesterday" "Drunken Lullabies" "You Won't Make a Fool Out of Me" "Man With no Country" (?)