Calling All Buskers! Washington Ave. Could Be Filled With Street Musicians This Summer

March 11, 2010 at 2:49 PM
comment
Busking, a.k.a., playing music or performing on the street for tips, is by its very nature a drifting occupation, from one corner to the next. But one St. Louis man has plans for organized busking this summer on one of St. Louis' trendiest streets: Washington Avenue. 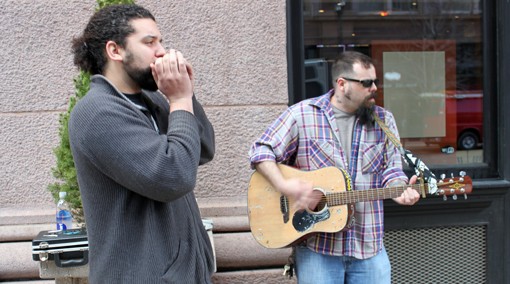 Mike Kociela, one of the operators of Entertainment St. Louis, a concert production company and an organizer of the Taste of St. Louis food festival each fall, wants to draft the city's musicians to play around Wash Ave. this summer.

And he's looking for talent.

At a press conference on Thursday morning at Flamingo Bowl that announced various events planned for this summer downtown, Kociela said he wants to take buskers from rogue status to official levels.

"We want to make it clear they're official," he noted.

While street performing is best-known as an informal, grassroots operation, Kociela says his planned project would place musicians on street corners up and down Washington, which might be more likened to Astro-turfing.

"We would love to," Kociela said when asked if he plans on hosting an open call for musicians any time soon.

Street musicians, are you interested in taking your act to Washington Avenue?