Review: Girls, Magic Kids and the Smith Westerns at the Gargoyle, Sunday, February 7

By some accounts, a Girls concert is an inert affair. This assessment is usually the result of sizing up the band's unusual biography against the near-universal appeal of its debut album -- and then seeing the band live. Anything less than the pale Nazarene himself taking the stage and playing guitar all night with his feet leaves folks feeling underwhelmed. After first factoring for the well-known Gargoyle Effect™ (poor acoustics, sauna humid, no sightlines, no beer, ferocious student b.o.), I would say that Girls delivered exactly the vibe you'd expect from its songs: warm, staid and fringed with panic. 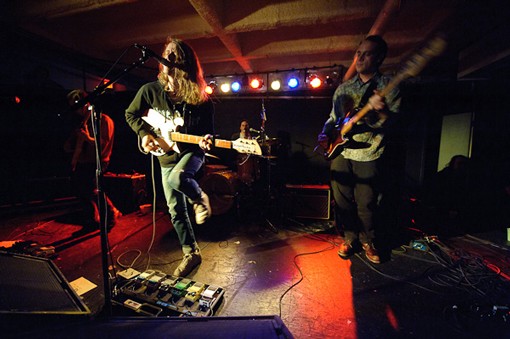 Most of the show focused on lead singer Christopher Owens, whose woebegone manner and chessmaster-cool surround him with a nimbus wherever he travels on stage. While Girls has another half in multi-instrumentalist JR White, there is no question that Owens is the source of the band's draw -- as is his voice, which (at least last night) deepened like a coastal shelf over the course of the show.

The band played through most of its debut, Album. Almost every song, lyrically suspended somewhere between disappointment and desire, collapsed into a lullaby, due in no small part to Owens but also to the low-ebb energy of the band. This became particularly apparent in the middle of the set after several slower numbers, but things picked up with roaring performances of "Big Bad Mean Motherfucker" and "Morning Light," both of which revitalized the audience.

But if that heat-stroked crowd was any measure, "Lust for Life," a wide-eyed song destined to be a karaoke standby, is where Girls has found its niche. (Given that Album genre-hops over so much sonic ground, it'll be interesting to hear down what path Owens and White take the band on the next record. Let's just hope it's not called Album II.)

True, Owens might not have talked much during the show, but what does he need to say? His lyrics are as literal, personal and plainspoken as you can get without becoming stilted or being buried in the quotidian. There's not much mystery to his music--and that's a blandishment, when I see Girls next, I'd just as soon not throw around.

The Smith Westerns opened the show. With a detachment verging on indifference, the Chicago teenagers lurched through their boggy songs with slippery guitar effects and muffled vocals. The songs started just as abruptly as they ended--as did the set proper, as the band left the stage without so much as a goodbye. Memphis-bred Magic Kids, on the other hand, was as bubbly as its tunes, estimably updating groups like Gary Lewis and the Playboys. Points, too, for its singer dismounting from stage into the crowd, even if the idea was quickly aborted.