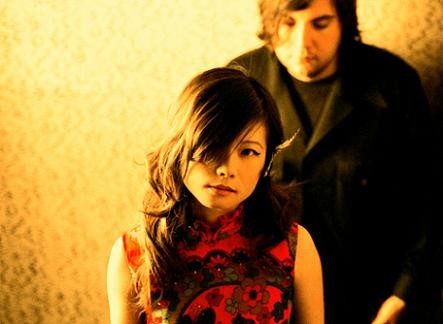 Those in attendance at last night's acoustic Asobi Seksu show at the Old Rock House had the rare chance to witness an exercise in polar opposites. A band that's usually shrouded in a layer of low-lit mystery and swirling noise bravely took the stage with absolutely nothing to hide behind. From the first gentle finger plucks and lofting vocal coos of "Breathe into Glass," this show proved that the best shoegaze and dream-pop bands don't use noise to mask shoddy songwriting -- they simply like painting abstract brushstrokes of sound atop simple and beautiful melodies. Vocalist/keyboardist Yuki Chikudate showcased these melodies with precision as her vocals soared up toward the rafters of the towering two-story ceiling of the venue, a fitting place for such a delicate show.

The next song, "Walk on the Moon," followed the tracklist of the band's recently released acoustic album, Rewolf, and found Chikudate seated at a real acoustic upright piano with her back partially to the audience. She twinkled the ivories with gentle fidelity and tact as guitarist James Hanna picked out delicate patterns on the acoustic guitar and proved that he doesn't need an arsenal of effects to make beautiful noise.

A cover of Hope Sandoval's "Suzanne" floated on waves of vintage squeezebox played by second guitarist Billy Pavone and perfectly took the place of the mellotron patches used on the band's recording of the tune. Chikudate shined as well on percussion, laying down lightly tapped flourishes of glockenspiel on this song and tambourine and toy piano on others. More crisp percussion on "Urusai Tori" propelled that song forward; Hanna's finger-picked classical guitar had an almost Spanish feel, what with its humble sounding nylon strings.

Chikudate was gracious to the audience, telling them that the band always enjoys visiting St. Louis and that the venue had treated them well. This direct interaction was also in total contrast to Asobi's plugged-in shows, where the tiny singer generally remains in shadows, never really directly addressing the crowd. It was nice to hear stories about the genesis of songs from the band's three full-length albums.

Before sliding into a stirring, ballad arrangement of "Thursday," Chikudate explained the song's '60s-French-pop influence, and added that the song was originally done in this way. Angelic, falsetto back up vocals from drummer Larry Gorman were surprisingly spot-on and blended perfectly with Chikudate's melodies. Gorman even took the lead toward the middle of "Thursday" when Chikudate went into the Japanese spoken word monologue.

It's a shame that many of the most delicate moments of the night, as well as some of Chikudate's most interesting stories, were lost in a constant low chatter coming from the back of the audience. At other times you could hear specific audible conversations either while the vocalist was speaking or even in the middle of a very quiet section of a song. It's impossible to address this problem without sounding like the snobby music connoisseur or old curmudgeon -- but it bears mentioning that crowds in St. Louis should learn some show etiquette, especially when attending such a quiet, stripped-down show. Asobi's performance deserved this much at least.