Want to Own the Amp Used at O.J. Simpson's Trial? Now You Can!

File under: You really never know what's going to show up for sale on Craigslist. About twenty minutes ago, a posting for the amp used in O.J. Simpson's 1995 murder trial popped up for sale in St. Louis. The seller says:

I have the PA amp that was used in the Trial of the Century. It is a Stewart PA-50B. I recieved it from the Contractor that remodeled the L.A. County Courthouse. It still has the Seal of the L.A. COURTS on the back an it says jurybox on the front. I have powered it up an jammed my Ipods threw it an its loud as hell for a half rack space power amp! This is a collectors item like no other. Millions of people watched the Trial an listen to this amp ."If the glove dont fit you must aquit" So give me an offer.

The seller is only keeping it up for a week, and then says he's heading to eBay. Here are the photos included with the post: 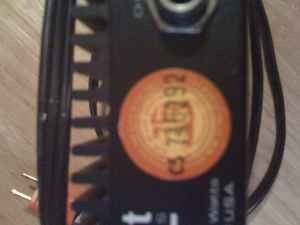 You be the judge whether you feel this is a collector's item -- or legit. (Also taking bets on how long this will be up before Craigslist yanks it.) Simpson was found not guilty of the murders of ex-wife Nicole Brown Simpson and Ronald Goldman in 1995. He's currently in jail in Nevada, however -- a stint stemming from a 2007 robbery in Las Vegas.