The new documentary about black metal -- that satanic, unholy combination of thrash guitars, blast beats and guttural vocals -- is made by posers. That's the assumption one might have going into a viewing of Until the Light Takes Us, the documentary which looks back on the Norway's now-infamous black metal scene of the early and mid-'90s.

If author Michael Moynihan's Lords of Chaos is the definitive account of the black metal scene,  Until the Light Takes Us might be likened to an evil Behind the Music, spiked by prison interviews with one of the scene's godfathers. Filmmakers Aaron Aites and Audrey Ewell moved to Norway from San Francisco for "several years"  to make the documentary.

The result is, as stated by the documentarians:


A poignant, moving story that's as much about the idea that reality is composed of whatever the most people believe, regardless of  what's actually true, as it is about a music scene that blazed a path of murder and arson across the northern sky.

If the above lines leave you confused, this quotation from the press release is less foggy: It's "comprised of metal musicians, murderers, church-burners, and suicide victims... this previously underground scene is known today in equal parts as being an ideological movement, an anti-commercial  music scene, an art movement, and a terrorist movement who terrorized Norway's Christian population."

But unlike Chaos' Moynihan, the filmmakers didn't grow up as die-hard metal fans. 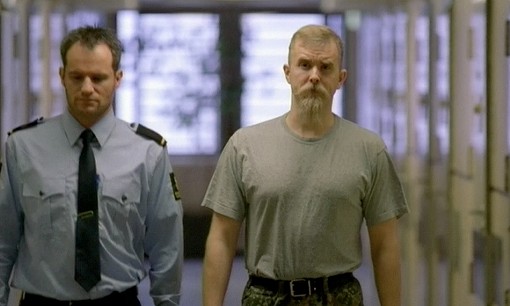 "A friend of ours (and the guy who released Aaron's first full length Iran album) runs Aquarius Records and insisted that we give black metal a listen. We thought we weren't interested, because metal wasn't really our cup of tea. But to our surprise, we loved it," says Aites in a press release for the film.

While that line exposes the filmmakers as relative newcomers to metal -- and worse, indie rockers -- they seem to get the goods regarding interviews: Highlighted in the film are interviews with Varg Vikernes, a convicted murderer and felon and creator of the one-man metal group Burzum.

The interviews with Vikernes were conducted while he was in prison, but as Nick Pinkerton of LA Weekly writes, they didn't probe too deeply in their conversations with the black metal old-dog, a missed opportunity:


...Unfortunately, the homosocial/homophobic schizophrenia of Black Metal is herein unexplored. (As is the actual music.) Maybe the filmmakers "don't judge their subject," but in giving Varg a soapbox, while being too timid to dare him out of his comfort zone and push him to articulate the less palatable aspects alleged of his philosophy (enthusiasms for Quisling, eugenics, etc.), they only indulge his cult of personality, letting Varg and the audience off easy.

There has been local push for this film to show in St. Louis, most notably a Facebook group dedicated to getting it here. When it plays this weekend at Webster University, it might be the only time it is shown in a former chapel: the Moore Auditorium has stained-glass windows and a balcony where a choir might sing. (Just don't try to burn it down after viewing, that's frowned upon.)

Students of heavy metal (and everyone else) can judge for themselves if Until the Light Takes Us is indeed false-metal this weekend. The 93-minute documentary shows at 7:30 p.m. both Saturday and Sunday night. Tickets are $6 for the public and free to Webster students. There are other discounts as well, check the Webster Film Series Web site for details. The Moore auditorium is at 175 Edgar Road in Webster Groves (map.)