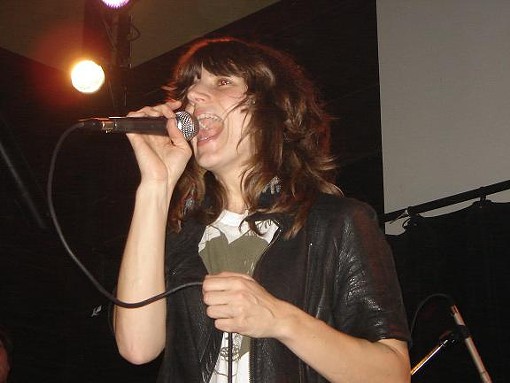 Popular wisdom among Fiery Furnaces fans is that you never know quite what to expect when the band heads out on tour. It constantly overhauls its choice of instrumentation, song catalogue and overall approach to confusing the audience. One tour might find the band careening full-tilt in art damaged, Beefheartian freakouts, while another tour might find them indulging in wonky, organ-driven carnival fare. This tour, however, found the Fiery Furnaces in the best shape they've been in years, with Eleanor Friedberger fully possessed in her role as lightning-tongued lead woman, leaving Bob D'Amico (drums), Sebadoh's Jason Loewenstein (bass), and Matthew Friedberger (guitar) to do the heavy lifting as an absolutely devastating power trio.

The set opened with "Rub-Alcohol Blues," a quiet and understated preamble to the beast the band was about to awaken. Without missing a beat, the Fiery Furnaces headed straight into "Charmaine Champagne," a single from last year's I'm Going Away, but the main riff and "ba ba ba da"s were slowed down to a meaner, bluesier growl. Then, in a drastic shift from the original, the tempo picked up double-speed midway through the verse, and cracked open beyond all recognition of a time signature moments after the chorus.

The thing about being a Fiery Furnaces fan is that it requires near total submission to your power chord-hungry overlords: Even if you've spent months internalizing its studio albums and radio bootlegs and YouTubed past performances, you'll never be able to predict where it'll go next. A song such as "Drive to Dallas," for instance, tugs the listener in contrary directions -- Loewenstein fingers a wormy, West Coast funk bass jumble at the same time Matthew chokes out an anguished progression on the highest register of his fret board -- but it's the sudden outburst of noise which somehow resolves these tensions and makes the song congeal. The incredible thing is watching the fans respond: People in the front were shimmying and shaking, head banging and Beatle Bobbing, and even finding the temperance to sing along with Eleanor's detailed and speedy narratives.

The Furnaces are ruthlessly precise and chameleonic shape-shifters, shamelessly engaging in head fakes, rhythmic misdirection and sonic 180s. So while even though Saturday's performance drew material primarily from Gallowsbird's Bark and I'm Going Away, the band's two most straightforward records, there was no shortage of jaw-dropping compositional reinterpretation. From the thwomping punk-kraut assault of "Crystal Clear" to the reggae explorations on "Cut the Cake," or from the improvised Little Richard "Whoo!"s on "Up in the North" to the full-throttle power pop of "Two Fat Feet," the Fiery Furnaces were, well, on fire.

No selections came from Rehearsing My Choir, and few songs came from EP and Blueberry Boat. However, a tune they pulled from Boat, "Chris Michaels," was the undisputed highlight of the evening. The song was nine minutes of everything the Fiery Furnaces do best: deconstructed, freewheelin' rock & roll, complete with song-within-song diversions, righteous guitar solos, and anthemic codas. Calling it the spiritual equivalent of the Who's "A Quick One While He's Away" wouldn't be out of line.

The set proper was 60 minutes, followed by a 30 minute encore. With no actual backstage, the band members simply shifted to stage left for a few moments before returning with Eleanor on drums and Matt on lead vocals for a sparse and touching rendition of Bitter Tea's "I'm Waiting to Know You." The show ended, rather abruptly, with "Don't Dance Her Down" - the stage lights flashed and the band shrugged, recognizing its time was up.

It was an exhilarating, bewildering concert experience, with no undue flash or glitz needed from the band. The venue, which has just recently entered the fray of indie booking, seemed well-suited to serving the needs of its clientele, with a spacious balcony, video projections of the stage back near the bar, and a high enough stage for the fans in the front. It may be too soon to tell, but the Old Rock House looks to be legitimate competition to venues like the Firebird and Off Broadway. As long as they keep hosting excellent shows like Saturday's Fiery Furnaces concert, I see no reason not to come back.

I'm Waiting to Know You I'm In No Mood (with A Candymaker's Knife in my Handbag included?) Two Fat Feet Asthma Attack Japanese Slippers Don't Dance Her Down