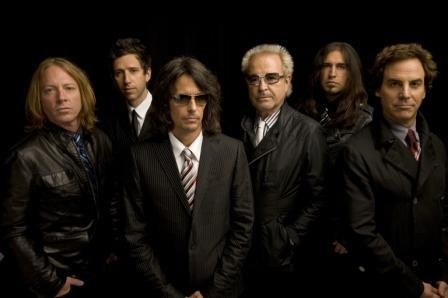 Kelly Hansen, vocalist of Foreigner since 2005, is a frontman. He wields the mic stand like a sword -- or a young Steven Tyler. He struts around the stage wearing sunglasses without looking like a tool. When singing tender moments, he frames his face with clasped fists, like the Phantom of the Opera, or gestures to the sky with dramatic flair. He nails the high notes, creepy-longing vibe and drama quotient on "Waiting for a Girl Like You."

In the hands of anyone else, these moves would send the Douchebag Meter off the charts. But Hansen was the rare rock star who oozed confidence and cool - and nothing else - at Foreigner's gig last night at the Bottleneck Blues Bar in the Ameristar Casino. In fact, that's the beauty of the classic rockers: They can get away with excessive schmaltz (or orchestral excess) because their music doesn't quite play nicely with other arena dinosaurs. The missing link between glam, British pastoral folk, classic rock, new-wave and hair-metal, Foreigner's tunes fit nicely on classic-rock or pop radio - without sounding stodgy or dated.

The set-opening one-two punch of "Double Vision" and "Head Games" confirmed this: The latter featured an extended guitar solo courtesy of founder Mick Jones, while the former was a spot-on, theatrical pseudo-prog jam. The glammy guitar rocker "Dirty White Boy" was phenomenal, a highlight that was loud, energetic and mischievous in all the right places. "Feels Like the First Time" and its laid-back boogie felt like a familiar, lazy Sunday afternoon drive, while "I Want to Know What Love Is" flashed the venue back to Senior Prom '85. Multi-instrumentalist Thom Gimbel dusted off the sax for "Urgent" (which made the song resemble late '80s Duran Duran - not necessarily a bad thing) and flute for "Starrider," a Mick Jones lead vocal that sounded like a cracked-out countryside drug jam.

Foreigner released a new album, Can't Slow Down, late last year, which featured production help from Mark Ronson and Marti Frederiksen, who's worked with Aerosmith and Buckcherry. The guidance explains the quality of two new songs it played from the album, "When It Comes to Love" and "Can't Slow Down." Both were solid, airtight rockers reminiscent of Bon Jovi or Van Hagar - and I couldn't shake the feeling that had a band such as, say, Shinedown recorded "Love," it would have no doubt been a top 40 smash.

Still, the band appeared to enjoy itself immensely as it ran through hit after retro hit. Hansen commented on the intimate venue, saying: "Consider this a basement rec room, and you're wealthy and can afford Foreigner." Jones was also downright jovial: During band introductions, he described Hansen as the man "singing the Jesus out of these songs. His way of singing these songs has brought them back to life." The same rejuvenating spirit was evident in the band's rhythm section: drummer Brian Tichy, known for his work with Billy Idol and Ozzy Osbourne, and bassist Jeff Pilson, the co-founder of Dokken. Their rhythmic backbone -- including Tichy's insane, Dave Grohl-like punkish metronome and Pilson's headbanging -- kept things brisk and lively.

By the time Foreigner unleashed "Juke Box Hero" - which emerged after a space-age synthesizer solo (!) and a drum solo that involved Tichy playing the kit with his bare hands (!!) - the entire venue was beside itself. In back booths, a man stood and played air guitar like he wasn't going to feel it in the morning, while the band jammed on the song straight on through to a cover of led Zeppelin's "Whole Lotta Love." The song ended in tightly controlled chaos, the six members of Foreigner jamming together loudly.

Critic's Notebook: I like Foreigner, very unironically. Perhaps it's the synths - and the presence of Thomas Dolby on 4. He's the one responsible for flourishes on "Urgent" and the iconic intro to "Waiting For A Girl Like You."

Personal Bias: My pals Cobra Verde covered Foreigner's "Waiting for a Girl Like You" on The O.C.

By the way: Jeff Pilson looks unbelievable for being 51. He looks two decades younger, easily.

Encore I Want To Know What Love Is Hot Blooded