Nick Jonas is polite. He has a firm handshake. He takes after his father -- a man wearing a cozy sweater who smiles jovially and also shakes hands warmly, while thanking me for coming to the show. I'm backstage and upstairs at the Pageant, and Nick Jonas is asking me what I thought of his show with the Administration.

But let's backtrack. Kevin Johnson, pop music critic for the Post-Dispatch, arrived at the Pageant after I did, and happened to be sitting next to me. We started chatting, and he mentioned something about an email he and I were cc'd on. I hadn't checked my email in several hours, and so he explained that Nick Jonas and the Administration's tour manager had emailed us: The musician wanted to meet us after the show, because he wanted our opinion on it.

Now, lest you think that this is a regular occurrence for a music critic, think again. This never happens. Let me repeat: This never happens. For starters, we generally don't hang out backstage at a show, or pal around with famous rock stars. Interviews we do tend to be over the phone, in advance. Music journalism is not a ticket to the glamorous life. I'm certainly fine with that; I didn't get into this business to pal around with famous people.

Besides that, musicians often don't read their press. (Can you blame them? Would you want to read paragraph after paragraph about how much you suck?) And if or when they do, you rarely hear reactions to your stories - good, bad, angry or otherwise. In other words, it's practically unheard of for a musician to reach out like this - especially right after he's played a show. 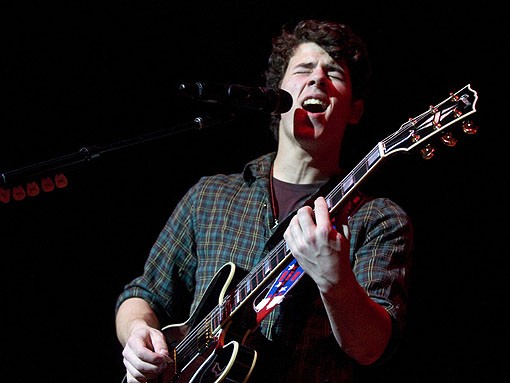 But Jonas has been meeting journalists on this entire tour, which is serving as an introduction to his newer, more mature material. Strangely, I'm a bit nervous during the show, not sure what to expect when we do meet - mainly because it's rather intimidating. It's like having your mother-in-law ask you what you think of her cooking, as you're in the middle of munching on some (perhaps dubious) culinary concoction. What if the songs weren't good? What if I had to lie about their quality?

Thankfully, this isn't the case, which makes the encounter that much less nerve-wracking. And so the show ends, we meet the tour manager near the stage, and Kevin Johnson and I head upstairs to the Pageant's backstage area. We wait around a bit, and then Jonas appears. He's still wearing his same outfit from the stage (a brown shirt, jeans and a necklace with a few charms on it) and is ruddy-cheeked from performing.

After an awkward, "you go first - no, you go first!" between Kevin and I, he begins talking. Jonas listens intently as Kevin tells him his impressions of the show. I chime in with some statements after - I mentioned, as I hinted at in the review, that the end of the show was strongest, and that I liked the song "Rose Garden" quite a bit. We're standing in a hallway, but things are casual and, surprisingly, not awkward.

Jonas reveals inspirations for some of the newer songs (Maxwell and Marvin Gaye) in response to Kevin's comments, and remarks that they should record the power-pop tune "While the World is Spinnin" after I note that I liked it. Throughout our brief conversation, though, I get the impression that Jonas really is interested in hearing what I have to say, that my input is valuable.

Now, I write a lot of show reviews, as regular readers of this blog know. But my words are thrown out into the vacuum of the Internet, or spread throughout the city in the print edition of the paper. Rarely do I feel like my thoughts have actual, tangible value or impact. And yet in this brief instant, I do. It's a testament not only to Jonas' polished demeanor, but the genuine, sincere undercurrent to his actions. He certainly doesn't have to meet with journalists, much less invite them backstage after a 90-minute show, when he's obviously tired. It doesn't get much more dedicated than that.