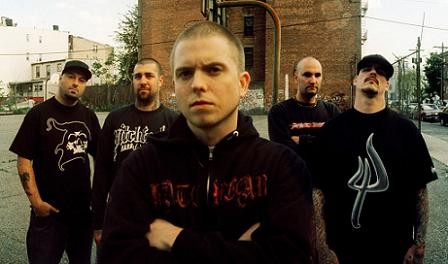 In this week's issue, D.X. Ferris chats with Hatebreed frontman Jamey Jasta, who just might be one of the nicest dudes in rock. The Connecticut metallic hardcore band plays at Pop's tonight with Born of Osiris, Unearth, Cannibal Corpse and Hate Eternal. Below are interview outtakes, in which Jasta discusses the rationale behind a covers record, Hatebreed's touring partners and the status of his in-the-works books involving his lyrics and his time hosting MTV's Headbanger's Ball, respectively.

D.X. Ferris: With a covers album, the bulk of money goes to the songwriters. So what's payoff from a covers record? Jamey Jasta: The payoff is that it comes back to you tenfold when you pay homage and pay respects to people that paved the way for you to do what you want to do, and live your life the way you want to live it, and play your music the way you want to play it. The payoff is the cyclical power of the fans that want to get into it and say "I never heard Negative Approach before," or "I never heard D.R.I. before, and I went back [and checked them out]." And then you have the diehard old-school fans that never got into Hatebreed before we covered Suicidal Tendencies. And you have the fans of the big bands like Slayer and Metallica that want to hear what you've done with it. It creates that curiosity.

What's the latest with your books? I had a major setback with the lyric book, which the lawyers are dealing with. Let's hope these bad deals I've done in the past don't come back to haunt me any more. It's not something I can really talk about in the press. When you sign a bad [record] deal, it affects everything: the use of your lyrics, and the use of your music in commercials and TV shows and movies and soundtracks.

And with the Headbanger's Ball book, I really just wanted to change the content to be a little more motivational and inspiring. I don't want it to paint this dismal picture of the music industry and behind-the-scenes stuff - and it wasn't. I wanted to show people that you can come from nothing. I mean, I have basically an eighth or ninth grade education, and I was hosting a show for four years on a major network.

I was thinking, if I had no TV experience, and I already had the best job in the world, and I ended up getting the second-best job in the world, I need to put it out there so people can get information from it, if they want to go into TV or radio or journalism. I did go get a crash course in the Connecticut School of Broadcasting. I did read a teleprompter and practice and gain knowledge of the bands that I wasn't a fan of. I wanted to show people that you can come from nothing.

Who was the toughest interview for the show? Definitely [Iron Maiden frontman] Bruce Dickinson.

I would have guessed him or [Megadeth frontman] Dave Mustaine. Mustaine always showed me respect. Mustaine was very cool. Dickinson, he's done thousands and thousands of interviews, and I can see how he's just over it. I don't blame him. I talk about it more in the book. I don't want to give away the whole story, but he's one of those guys where if he's having a bad day, you're not going to get anything.

Hatebreed goes out of its way to share the spotlight with bands that are older or smaller, like the European tour with Agnostic Front and Ringworm. How does that reflect how you try to do with your career? You want to do what you can to help where you can. Look at what Metallica's doing now: They're on a strong record and they're on a great comeback. They're able to choose great bands, and they're doing a great service for metal. So on our much-smaller level, we're doing the same thing. In Europe, we know every show is going to be sold out, so we can take out bands like Ringworm and Agnostic Front or smaller bands, and it comes back tenfold when you do something good for somebody. I really believe that.

Ringworm, to this day, is still [playing] a very unpopular style, but they keep doing it, and I like it. And when you do it when it's [a] bad [time], that means it's that much more true. That's kind of what we've done with Hatebreed: We played this style of music when it was very, very bad to do it. And it became very good to do it. And now it's kind of bad to do it, but we keep doing it, because our hearts are in the right place.