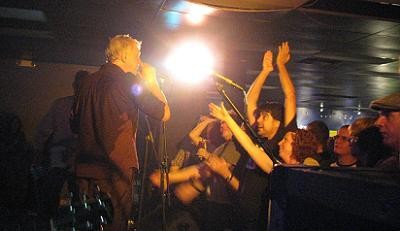 *On Friday night, Bunnygrunt played in Columbus, Ohio, as part of a Guided By Voices tribute night. Performing as Grunted By Voices, the group covered classics such as "Postal Blowfish," "Melted Pat," "Lips Of Steel," "The Closer You Are" and "Quality of Armor." Before the band hit the stage, however, word filtered through to me that none other than GBV main man Bob Pollard was in attendance at the show. He apparently left before the 'Grunt played, but vocalist Matt Harnish tells me that guitarist Nathan Farley -- who played in GBV's final lineup -- was very complimentary of the set. The Columbus website Donewaiting.com has a funny account of the Pollard sighting as well.

*Lady Gaga's January 7 St. Louis show is nearly sold out! Only the $250 "Hot Band" package is available. (All details here.) However, soothe your Gaga jones with Lady Stardust, a free David Bowie/Lady Gaga mash-up mix by Terry Urban. Grab it here! It's not quite as good as you want it to be, but the use of "Golden Years" is particularly good.

As an added bonus, check out a remix of Lady Gaga opener Kid Cudi's "Day N Nite," by the Nashville band Paper Route, who wowed opening for Paramore in early November. Download that here!