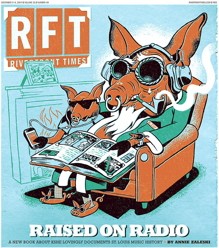 In this week's issue, Annie Zaleski heralds the arrival of In Concert: KSHE and 40+ Years of Rock in St. Louis, a scrapbook of the area's latter-day music history. Reading "Raised on Radio" put a few of us locals in a nostalgic state of mind, inspiring an e-mail frenzy of the KSHE Klassics of our formative years.

Before we knew it, we'd traded links to several dozen YouTube videos and figured it'd be selfish of us not to share them with RFT readers. The list got so long that this here is the first of two installments.

The sole criterion for inclusion: A song must have garnered airplay in St. Louis that outstripped its popularity in other corners of the planet. That's it.

Now, without further ado, and in no particular order, we'll get started...

Missouri, "Movin' On" If your band is called Missouri, everything you do is a KSHE classic by definition.

Barclay James Harvest, "Titles" A terrible, terrible idea -- string together all the Beatles song names you can think of -- yields a terrible, terrible song. And tomorrow it'll still be rattling around in your skull! (The video's awesome.)

Chilliwack, "Something Better" This Canadian band made a lot of records (sadly).

Foghat, "Slow Ride" Is it eligible for this list if it's on Guitar Hero? Oh, yes, yes, it is.

Aphrodite's Child, "The Four Horsemen" Think of Aphrodite's Child as a poor man's Emerson Lake and Palmer. All together now: "The leading horse is white. The second horse is red. The third one is a black. The last one is a green."

Nektar, "Show Me the Way" One of those classics that was big all over-- but ever so much bigger in STL.

J.D. Blackfoot, "Song of Crazy Horse" J.D. Blackfoot might not make any other rock list, anywhere. But he makes this list twice! We'll start with this 'un.

Head East, "Never Been Any Reason"Would you like some affection before I leave again? A Champaign band? No. Fucking. Way. St. Louis, baby!

Albert Hammond, "Free Electric Band" You may not have heard of Albert Hammond. If you live outside of St. Louis, that is. You got to hand it to him, though -- dude wrote "It Never Rains in Southern California." Can't exactly call that a KSHE classic, though. On that score, we could just as easily have used "Smokey Factory Blues," but this live performance is precious. (Aside: His son is Albert Hammond Jr. of the Strokes.)

Elvin Bishop, "Travelin' Shoes" Performed live, on In Concert in 1974. Gonna get Hank Aaron's baseball bat and tenderize her head.

Rainbow, "Stone Cold" [embedding disabled] Painful as it is, this list wouldn't be complete without a Rainbow cut. Ritchie Blackmore's second great band deserves better than a second-rate, pop-radio song as its epitaph. Such is life.

Ram Jam, "Black Betty" Someone did this to Leadbelly. That took cojones.

Pavlov's Dog, "Natchez Trace" Perhaps Pavlov's Dog was a band ahead of its time? If so, its time still hasn't arrived.

Boz Scaggs, "Loan Me a Dime" Bear in mind, y'all, it doesn't have to be execrable to be a KSHE classic. Boz Scaggs' version of "Loan Me a Dime," recorded with the legendary studio crew in Muscle Shoals -- including Duane Allman -- is a tour de force. It also clocks in at 12 minutes plus, which means you weren't gonna hear it on the radio. Unless your radio was tuned to KSHE. Here's Boz with the Allmans earlier this year. (Bonus link: A performance by Fenton Robinson, who wrote the song.)

That's all for now. Tune in tomorrow for Anyone ready for Part 2?