The Old Rock House Revamps Its Booking, With an Eye to National Bands 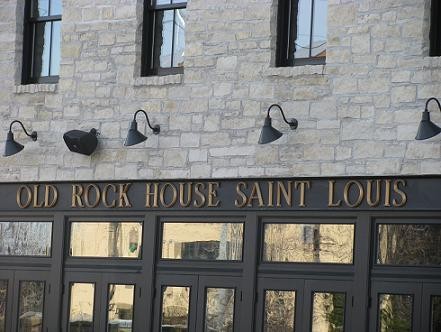 The Old Rock House (1800 South 7th Street) opened in July 2007. Since then, the multi-level club/restaurant has hosted a diverse array of live concerts, events and performances. However, the venue has big plans for 2010 and beyond.

Starting February 1, Tim Weber, who booked the original Mississippi Nights, will take over the same job at the Old Rock House. (For the record: This new position does not have anything to do with the old club.)

Although local bands will still be an integral part of the club's concert schedule, Weber is making a concerted effort to "bring in a wide range of national stuff."

"We're going to bring in everything and try and make this really have a more listening-room-style vibe to it, a nice, laid-back place to come, grab a bite to eat, enjoy happy hour, stay that night and catch a band," he says.

Besides the previously announced Evan Dando solo show on February 16, national artists confirmed to appear so far next year include indie-pop artist Sondre Lerche, twang-stalwarts Backyard Tire Fire and New Orleans rockers the Radiators. Special engagements include a two-night solo acoustic stand with roots-rock favorite Todd Snider and a "This Valentine's Got the Blues" dinner party with Janiva Magness, the Blues Music Awards' 2009 Contemporary Blues Female Artist of the Year.

Weber says that the venue is aiming to have live music five nights a week, from Tuesday through Saturday. (It'll have the option to be open on Sundays or Mondays if national acts roll through town.) Some shows will be all-ages, while others will be 21-plus. The restaurant's menu is also being revamped, and food should be available in the basement during shows. Patrons won't miss the show, due to an intra-club recording system that can beam video and audio to TVs scattered throughout the venue.

"We want a customer-friendly experience and of course, a band-friendly experience," Weber says. "But we want to be able to look at this from everybody's sides, and have a large number of people really feel comfortable walking in the door."

The Old Rock House's initial capacity will be 375 people, although that should be raised to around 500 within the first few months after Weber takes over.

Having another room of this size in town might raise some flags -- clubs close to that capacity include Off Broadway, the Firebird, Saint Louis University's Billiken Club and Blueberry Hill's Duck Room -- but Weber is confident that the city can support all of these venues.

"I've always been the guy who, if I don't think this is the right room for a band, if I don't think this is going to help further the band's career, I don't do the show. It has to be a partnership. If something comes in and [the agents] say, 'You know what, it's got more of an underground vibe,' maybe the Firebird's the place for it. Or if it's got that hippie-indie vibe, maybe Off Broadway's the place for it."

In the future, outdoor concerts in the vein of this year's Loyal Earth Festival or DJ nights are a possibility.

"The music business has changed so radically over the last decade that there's no shortage of bands running around out there who can fill up a room like this," Weber says. "Some of them will make a lot of sense to go to one venue over the other. We just want to present ourselves as a different choice.

"And for me, when I walk in here and look around this place, as compared to walking around other places, the choice that you're making here is really obvious. It's just a beautifully rehabbed room - no expense has been spared in making this a comfortable, creative, exciting place to come and enjoy a concert."

The Old Rock House will be closed for two weeks in January to "reconfigure the building." Otherwise, the restaurant opens at 11 a.m.