Road Trip Review: The Pixies in Chicago at the Aragon Ballroom, Friday, November 20 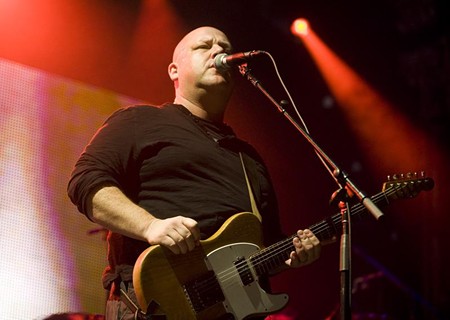 Last Friday night in Chicago, the Pixies managed to make the gimmick of playing an entire album from start-to-finish feel fresh. The amount of fun they appeared to be having had a lot to do with this: All smiles, the band members bounded onstage - seriously, bassist Kim Deal half-marched, half-skipped to her stage left position - and launched into three b-sides from 1989's Doolittle, the album in question.

The packed general admission crowd greeted these tunes warmly, but exploded in ecstasy at the searing bass melody which begins Doolittle's first tune, "Debaser." Deal piped up with her spoken-word background vocals as frontman Black Francis demonstrated that he can still hawk-scream just like he used to. The album's hit-loaded front half was solid; standouts included the hissing twang of "Tame," the playground-pop of "Here Comes Your Man" and lite-metal "Monkey Gone to Heaven." The latter song especially spawned a loud sing-along: The entire place chanted the counting-off portion of the song, including Francis' throat-shredding yells at the end.

The show really jelled during Doolittle's second side, however, starting with the quicksilver punk shiver "Crackity Jones," which let guitarist Joey Santiago shine. "La La Love You" followed and was full of whimsy, from the cheeky traded-off whistles between Deal and Black to drummer David Lovering's casual vocals and the Keith Haring-like hearts with legs which pulsated on the video screen. Other highlights included the cracked cowboy-lope "Hey" - whose lyrics danced on the back screen like a wobbly cartoon - and "No. 13 Baby," a lost Britpop classic if there ever was one.

The b-side-laden first encore was jaw-dropping: After the back-porch laziness of "Wave of Mutilation (UK Surf)," the fog machines fired up from the back of the stage. While billowing clouds of smoke enveloped the band, strobe lights started flashing, which rendered the quartet as shadowy figures. Cue the dizzying distortion-fest "Into the White," which was the show's highlight. Deal's detached, b-movie-damsel chant of the song's title spiraled downward amid the squalling noise clashes and blinding lights - creating a disorienting, bewitching, blanketing sonic experience. After that performance, the final encore - whose centerpiece was the Trompe le Monde fave "U-Mass" - almost seemed anticlimactic.

If anything, the night cemented Doolittle's status as a bridge album -- one that connected the crisp punk of the Minutemen with the accessible crunch of Nirvana. the freak-twang of Meat Puppets with the lo-fi blues of the White Stripes and the quirk-rock of Camper Van Beethoven with every other '90s "alternative" pop band. Yet nobody conflated these influences like the Pixies did: Doolittle's singular juxtapositions - sharp riffs and dreamy harmonies, silly asides and scorching yelps, surrealistic lyrics and child-like exhortations - were often imitated, but never duplicated. Twenty years and one dynamic Friday night later, that's never been clearer.

On the Road Again Reviews