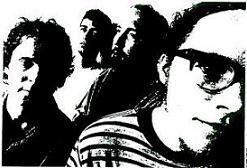 On Saturday night at Blueberry Hill's Duck Room, '90s pop band the Boorays is playing a show to commemorate its twentieth anniversary. A good history of the band can be found here, although Roy Kasten neatly summed up the band in this week's paper like this:

Like few bands from the early '90s rock scene in St. Louis, the Boorays sounds timeless -- or as timeless as its obvious R.E.M. and dB's influence permit. You could say the quartet got lucky with sources, or you could just recognize the talent of principal singer and songwriter Mark Stephens, who has never sounded quite as comfortable, confident or free as when aided by the precise rhythm section of Andy Thomson and Bob Kaemmerlen, the garage guitar of Mike Hellebusch and the whole band's keen, airy harmonies.

The band goes on at 10 p.m. (The Helium Tapes are headlining, Tight Pants Syndrome is opening.) Three of its members kindly took the time to answer some queries about what they're up to and how to snag their remastered music. View these quotes -- and snag some tunes -- below!

Why are the Boorays doing a reunion show now? Andrew Thomson, bassist/vocalist: Well.... we are kind of downplaying this aspect because it puts an exclamation point on how, um, experienced we are, but it does happen to coincide with the 20th anniversary of the first time we played out. Mike Hellebusch, guitarist/vocalist: After all these years, the band still loves its music and our friends and families continue to talk about the influence of the band on them and how much they enjoyed attending our concerts and listening to our music. Bob Kaemmerlen, drummer/vocalist: We really miss the music. As the years roll forward, we forget about sleeping on people's floors out of town and spending all day in a van together. The music is still pretty important to us.

Your three CDs have been remixed and remastered, correct? Where/who did this? And how can fans pick these up -- besides at the show? Mike Hellebusch, guitarist/vocalist: The three CDs were remixed and remastered at Brickhouse Acoustics by me. The first release was only available on cassette tape, so this is the first time it can be purchased on CD. All three CDs have been greatly improved. Also, the previously released single, "Pickup Truck," was included on the first remastered CD and two previously unreleased songs were included on the remastered Hollow In The Middle CD. All three CDs can be purchased online here. Thomson: Mike, the lead guitarist, spent many hours fixing up the sound at his studio, Brickhouse Acoustics. The earliest, self-titled one was originally a cassette only, which again reiterates how long ago all this was. When he was going through the original tapes, he found two songs that we had pretty much forgotten about that were recorded toward the end, which are now on Hollow in the Middle. Mike is also overlord of the Boorays-internet-world.

Bands in the power-pop/quirk-pop/jangle-pop genre, as you guys are, sometimes seem doomed to obscurity. Do you feel like it was harder for you guys to get attention because of this? Thomson: I think we were always aware of the fact that the kind of music that we played was not conducive to mass popularity, so none of us got overly bent out of shape about the lack of attention. But if you listen to our output chronologically, we definitely got harder-edged and darker lyrically as we went along. There was never a decision to change like that, I think it just happened because of a subconscious frustration over the feeling that we were improving as a band, but it wasn't translating to a larger audience. Or maybe it was because of frustration with each other! Hellebusch: Not really. We just wrote and played the music we loved to create and kept plugging away at it, always focused on our passion for the music and on having fun with it. Kaemmerlen: We really poured our little hearts into writing and the process was very collaborative. We never really aimed at anything particular or tried to craft something "popular," consequently. We accepted whatever level of obscurity we landed in! What are you most proud of about your time in the Boorays? Thomson: I think we improved over time, while still keeping the melodic aspect that we were all about from the start. We kept at it for a long time, despite plenty of differences with each other. Maybe our internal problems even helped us artistically. Hellebusch: We always worked collaboratively as a team and maintained solid friendships that continue to this day. It's rewarding as a musician to work with others who complement what you do. Kaemmerlen: We managed to put out a fair amount of recorded music. Certainly a lot of the songs don't hold up as well, but we really still enjoy a big pile of the songs.

What struck you guys about your music, as you listened to the records now? Did anything stand out as being better -- or worse -- than you remembered? Thomson: My biggest surprise was that the two songs recorded post-Hollow in the Middle, although still accessible, are more complex than I remember. On the negative side, what was with all the food metaphors? Hellebusch: To this day we love the number of great songs we have and how much people appreciated our music, our shows, and our special events.

When did you guys last play a show? Thomson: We have played a couple of parties this decade, but our last actual show were a trio of reunion shows in the late 1990's in conjunction with Thomas Crone's Silver Tray magazine at the Side Door. Yep, we're so old even our prior reunion shows took place at a long-defunct location. Our last show as a functioning band was at the original Cicero's, so we'll be in the same room this Saturday, but with no fear of hitting our head on a damp beam. Hellebusch: We played a short set last year for a private birthday party for one of our longtime and dear friends. It was so much fun!

Do you have a favorite show or band experience that stands out as memorable? Thomson: We were one of the bands that opened for the Big Star reunion show in Columbia. The one band we all may actually agree on favorably is the Replacements, and we opened for Tommy Stinson's band, Bash & Pop. We were one of the first bands to play the Hi-Pointe, and definitely the first band to play there to have Cheshire guests call the police on because of loudness. (There was not only no soundproofing, but there was an open fan right by the drums.) I have good memories of some of the weirder shows too (although I probably wasn't too happy at the time), such as when the comedy club at Union Station tried having music and we agreed to the experiment. 4 people showed up. We also played the inaugural First Night one New Year's Eve by Grand in a supposedly heated tent. I guess it was heated in that it was 30 degrees inside and 20 outside. Hellebusch: For several years the band, along with help from some of our closest friends, created and performed an annual Christmas Pageant that combined music and theater into a fun-filled evening of entertainment for our fans. The music, props, costumes, and theatrics of these shows was always such a great time. Kaemmerlen: Years of banging out sets in the old Cicero 's space were without question some of our favorite times. Before we started playing, we will real starry eyed about playing down in the basement...when we started playing as a "regular"...phew, sure was great. What is everybody up to now, these days? Thomson: The guitarists, Mark [Stephens] and Mike have kept active in bands, although Mike is currently between bands since the Maxtone 4 split. Mark is playing in a band, but I don't know the name (hopefully one of the other guys know). He was busy for many years with the Highway Matrons. The rhythm section went the path of having kids (although not with each other) and regular jobs. Hellebusch: Well, lately we've all been rehearsing our songs for the upcoming reunion show! But seriously, our drummer, Bob, is raising three children with his wife and works in the electrical contracting industry. Andy, our bass player, works in the law industry and is raising four children with his wife. Mark remains active in music as an artist and performer and works in the theater and construction industries. Mike remains active in music as an artist and producer and is an IT professional. Kaemmerlen: You can refer to my "electrical contracting industry" as Kaemmerlen Electric.

Anything else you want to add? Thomsen: We will also be playing the Silver Tray show on KDHX Friday between 12 and 2 p.m. We are fired up for this weekend!