It didn't take long to realize that Rob Zombie was cranky last night. By the third time or so he admonished the media ecology of cameras and cell phones snapping pictures and recording videos, he appeared almost stupefied. "This is not Miley Cyrus," he growled. "You're supposed to be animals!" Had he his trident handy -- he must own one -- Zombie might have picked off the front row. 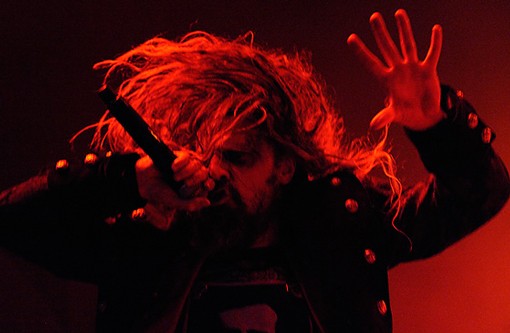 At his sold-out Pageant show, Zombie was less a scold than a good-natured curmudgeon who's been around long enough -- he's fast approaching Rock and Roll Hall of Fame eligibility, after all -- to remember when outstretched arms held only clenched fists. A certifiable cult metal figure and now a certified Hollywood commodity, Zombie exuded a relaxed depravity on stage, where his loping simian steps and Rockette kicks punctuated a show thick with sleaze, heavy on portent and dense with noise. Age has not withered nor custom staled his infinite vulgarity. For sensation and titillation, you could have done no better last night with your clothes on. 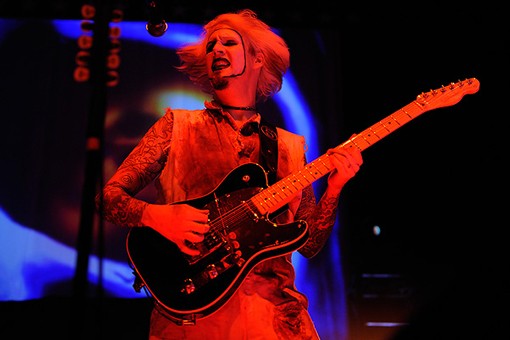 With John 5 on guitar, Piggy D on bass and Tommy Clufetos on drums, Zombie slunk like tar and scowled like sunburn throughout his brand of glammed-up heavy metal. Three mini-platforms on stage elevated the action and accentuated the aggression. Hopping from one to the next, Zombie managed to maintain his chained-to-the-radiator scream, which has been as integral to his success as his fascination with lowbrow Americana. Video screens and pricey light displays raunchified the show further, providing a cataract of mondo footage, neurotic erotica, horror films and sci-fi B movies, sepulchral imagery, S&M anime and ranchero porn -- an impressive effusion of high-concept schlock. Say what you will about his music, but Zombie's curatorial taste with visuals -- think Hieronymus Bosch on ketamine -- has no peer.

The set reached back to warmly received White Zombie-era songs ("More Human than Human" and "Thunder Kiss '65," both rushed in the way old hits always seem to be) but hewed mostly to the solo material. The swampy rumble of "House of 1000 Corpses" got hands clapping in the audience, as did the sewer groove of "Never Gonna Stop." "Living Dead Girl" and "American Witch" were incantations, boozy songs full of bravado and banshees. In songs from his forthcoming album, Hellbilly Deluxe 2, Zombie goosed the slithery "Sick Bubble-Gum," vamped industrial blues on "What?" and confederated together a trifecta of camp on "Werewolf Women of the SS." The power of the songs came from dynamic musicianship -- the onslaught of loud had barely a false note all night -- but at their trunk they all started and ended with Zombie's rarefied sense of showmanship. 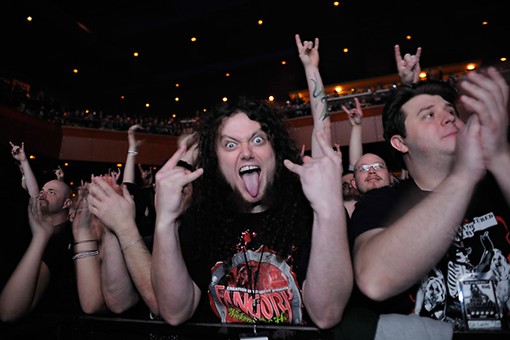 More than ever, though, Zombie looks stranded on an island of his own creation: too old-school (and, maybe, too old) to tolerate the tribulations of the road much longer, too hung up on his own bugaboos and bogeymen, too occupied with his directorial career. Then again, by almost geological accretion, he's stuck around thus far -- never evolving, exactly, but refining, sharpening, ventilating that biohazard mind of his. If there is a next time, may we leave our cameras at home.

Encore #1 Werewolf Women of the SS The Lords of Salem