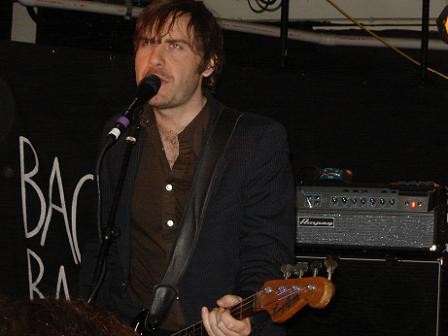 Peter Moren and Bjorn Yttling are a study in contrasts.

Bjorn, disheveled and in black, lumbers slowly across the stage. When he approaches the microphone, he drapes his mustachioed upper lip directly on the device, as if it would be too much effort to step back a few inches and project. He's aloof, unperturbed and totally chill. Bjorn is the bassist, naturally.

Peter, meanwhile, is the showman. Clean-cut and buttoned-up in a dapper beige jacket -- later discarded in an overheated fervor to reveal a pressed cream shirt (soaked through) and suspenders -- this was clearly a man accustomed to the limelight. He feeds off the adulation of the crowd. No matter how stark or rhythmically barren the tune, he would jump and jerk his body around, extend his arms out to the crowd, pantomime -- anything, really, to let us know that he wanted our attention. Peter is the guitarist, lead vocalist, egg shaker, harmonica player and, when appropriate, James Brown dance impersonator. John drums.

Whether or not Moren's showboating was necessary isn't exactly clear. Two years ago, Peter Bjorn and John were on top of the world. They were touring venues the size of the Pageant on the overwhelming success of Writer's Block, banking significant krona with Pontiac licensing deals and collaborations with the then still-beloved Kanye West. But the Swedes seemed to retreat from the spotlight, releasing an album of lukewarm instrumentals, followed in 2009 with Living Thing, a minimal and moody experiment in skeletal songwriting. They seemingly relinquished their throne as indie-rock royalty to become wizened Scandinavian craftsmen, intent on demonstrating in theory how a song can be hinted at with little more than a bass rumble and an echoic scrape of guitar.

But playing before Friday night's sold-out crowd at the Gargoyle, if there was any truth to their diminishing star power, they weren't letting on. Sure, the venue's a definite downgrade from the Pageant, but with Peter Bjorn and John's "do more with less" aesthetic, they seemed to get a kick out of delivering their stadium-sized performance in the sweltering confines of a basement rock club.

They opened with "Amsterdam," from 2006's Writer's Block, but they downplayed the clunky hip-hop percussion of the original in favor of the smooth-contoured lines of a sequencer and gently tapped electric guitar. The uptempo, '60s-styled baroque rocker "Far Away, By My Side" followed, but things started getting interesting when the trio finally moved to their newer material. "Living Thing," the title track to this year's album, is unlike anything they've done in the past -- it sounds like Paul Simon's Graceland transported to the cold surface of the moon. Eriksson's ticking, Euro-tribal drumming kept the song alert, but never progressing toward a linear conclusion, allowing Yttling's bass to burrow deep under the groove for a prolonged ebb-and-flow jam that Moren skittered about on top of frantically, even attempting his best Peter Gabriel falsetto.

But for all the adventurousness of the new material--the tough, throbbing rhythm of "It Don't Move Me," the danceably gruff and gritty "Nothing to Worry About" -- Peter Bjorn and John knows what butters their bread. Even before their set began, their tour manager Ed and Bjorn held a whistling contest among audience members to join them on stage for "that whistling song" that some folks may remember from a few years ago. When it came time, the winner, a woman named Marissa, took the stage with Peter, Bjorn, and John, as well as Ed on bongos and Sarah Assbring (a.k.a. El Perro del Mar, whose magnificent and mesmerizing opening set was criminally short) on backing vocals. It's true, we all knew what was coming, but when you get down to it, "Young Folks" is still a great song, and they played it with all the passion this party anthem deserved. The only drawback was when Peter, the consummate egoist, stopped the song mid-way and made us beg him to finish it. What a cock tease. Afterwards, he even made the crowd sing the band "Happy Birthday" in honor of their ten-year anniversary. That was a bit much. 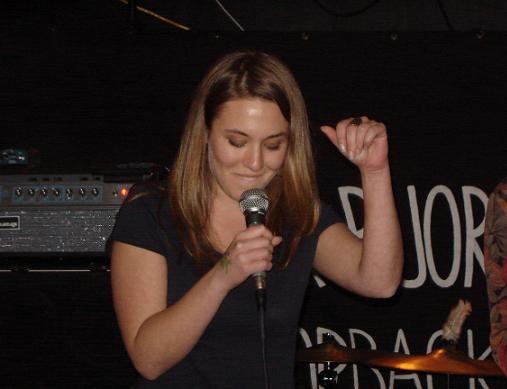 Any hard feelings I had were washed away with the set closer, a tribute to St. Louis' golden child, the incomparable Chuck Berry. Living in St. Louis, we get this a lot, but it's always a pleasant surprise to hear a contemporary pop musician born halfway around the world admit that he learned how to play his instrument by imitating our native son. They rocked out "Roll Over Beethoven" and the crowd went nuts for it. I even spied one of the security guards singing along.

Peter Bjorn and John's latest album may have sounded like the result of a cold, precise studio band, but Friday night's performance put that myth to rest. This is a band that dances and sweats and, as evidenced by encore finale "Objects of My Affection," appreciates the human impact of a properly timed crescendo. This is still a rock and roll band at heart, a wholly unique power trio. Let's just hope we see that in the next record.

Peter Bjorn and John: Amsterdam Far Away, By My Side Living Thing It Don't Move Me The Chills Just the Past Young Folks Nothing to Worry About [name help?] Roll Over Beethoven