King Khan & BBQ Show A No Show In St. Louis. Under Arrest in the Midwest? Deer Tick To the Rescue! 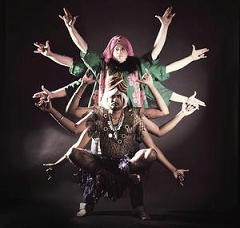 Update Monday, November 16: The band has issued an official statement and will continue their tour starting Tuesday in L.A.

Update 2:11 p.m.: Turns out Khan and Co. were actually picked up in Oak Grove, Kentucky. Details are available by clicking here.

Update 12:40 p.m.: Sgt. Karen Coker of the Christian County Kentucky Jail (in Hopkinsville, about an hour and a half outside of Nashville) confirms that tour manager Kristin Klein is in custody, charged with driving with a suspended license and possession of a controlled substance. Her bond is $3,000.

Coker did not, however, have any record of Arish Khan or Mark Sultan ever being incarcerated in Christian County Kentucky.

Update 12:11 p.m.: Booking agent Sam Hunt confirms The Pitch report. "One of the members of the party [tour manager Kristin Klein] is still in jail. We're working with a lawyer trying to resolve it. Everyone is safe and ok."

Hunt did not know the specific charges the group was/is facing.

Klein, apparently, is a former tour manager of The Black Lips so this type of chaos is probably nothing new for her.

UPDATE 11:30 a.m.: The Pitch Our sister paper in Kansas City, reports on the situation: "The booking agent confirmed that the band was arrested yesterday in Hopkinsville, Kentucky. The tour manager remains in jail, but everyone else is out on bail. No word of the charges yet, but the band will not be performing tonight."

Police in Hopkinsville would not confirm or deny that the members of the band were detained in there last night. We are awaiting a call back from a sergeant in the Hopkinsville Police Department who might be able to offer more information.

We also have a call into the booking agent, hoping to get more details there. Judging from our earlier update, though, he and the publicist are still unsure what state (both literally and figuratively) the band is in.

UPDATE 11:18 a.m.: This just in from Khan's publicist: "There is indeed some sort of hold up in TN, but still coming up short on details. I'll let you know when I find anything else out."

UPDATE 9:22 a.m.: Just spoke to King Khan & BBQ's publicist in Chicago. He was unaware that the band had missed the gig last night and was, needless to say, shocked when he heard about the rumored arrest. He said he'll call back when he has more information, which we'll pass on in updates here.

The rumor started spreading as early as 7 p.m. that Arish "King" Khan and Mark Sultan weren't going to show up for their nearly sold-out show Thursday night at Off Broadway in St. Louis.

The duo that comprises the King Khan & BBQ Show missed its early evening soundcheck and were M.I.A. and incommunicado throughout the night. Even as the eager crowd filed into the packed venue and witnessed a pair of impressive (though clearly stalling) opening acts, the chatter was that the headliners hadn't been heard from since they left Nashville--their previous tour date-- around 11 a.m. Thursday morning.

See a slideshow from last night's Off Broadway show.

At approximately 11 p.m., local concert promoter Joey O'Farrell grabbed the mic and sheepishly delivered the news: The King Khan and BBQ would not be performing. No, he didn't know where they were or what had happened. Yes, Off Broadway was offering a full refund to anyone who wanted it.

Then Deer Tick singer John McCauley took the stage and delivered an impromptu set of classic rock and roll covers.

According to O'Farrell and Off Broadway owner Steve Pohlman, Khan and Sultan were arrested somewhere between Nashville and St. Louis. The charge is rumored to be drug possession, but neither party could offer any specifics. 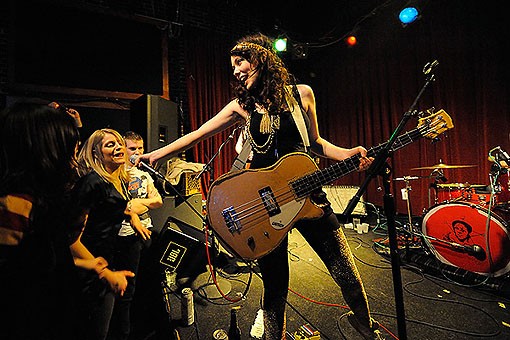 The news was actually taken as a relief by many in attendance, including openers Those Darlins, who performed the previous night with Khan in the Darlins' hometown of Nashville.

Shortly after O'Farrell made the no-show official, Jessi Darlin still was unaware of her touring partner's whereabouts.

"We left [Nashville] at 11:30 this morning-- they left at 11, they should have been here before us," the sweat-drenched singer said shortly after leaving the stage. "We called the tour manager and it went straight to voicemail. The other two band members are from out of the country and don't have cell phones. We contacted the Missouri Highway Patrol, the Tennessee Highway Patrol, and the Kentucky Highway Patrol. Nobody knows where they are."

Then, within a few minutes, word came from the bar owner and promoter that the group had been detained by police-- though neither was quite sure where or when the rumored arrest occurred. A call to Khan's tour manager's cell phone went unanswered and straight to a message saying that her voicemail inbox is full.

Pohlman, the bar owner, offered a full refund to anyone who asked for one, though many in the audience were seen taking back only a few dollars, telling the doorman that they'd had a great time at the show despite the disappointment.

Frankly, it would have been hard not to.

Turns out, McCauley is dating engaged to Those Darlins guitarist Nikki Darlin and had tagged along on tour. 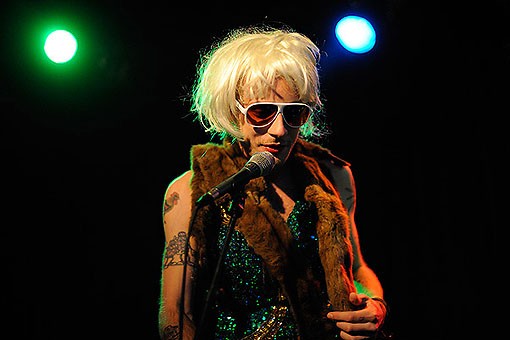 He had actually taken the stage previously to introduce the band dressed in drag in a blond wig and green sequined gown. 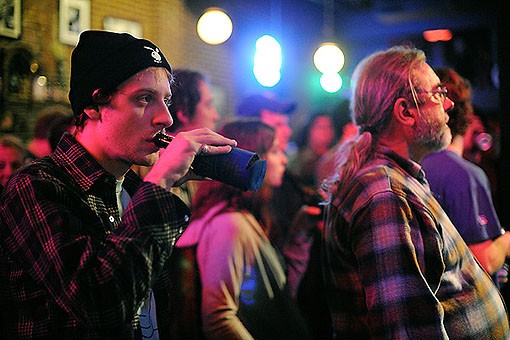 When he re-emerged after their set wearing a flannel shirt and Playboy bunny beanie, he was nearly unrecognizable. But backed by Darlins drummer Linwood Regensberg and an odd (and very drunk) ensemble, he entertained the sizeable crowd that remained.

As for Khan and Sultan, we'll share the details about their situation as soon as we get them. It's unclear how their rumored run-in with the law will affect the rest of the Canadian duo's tour, which is supposed to continue Friday in Lawrence, Kansas.

"It's been a very rock and roll kind of night," Pohlman said, neatly summing up the evening's bizarre turn of events. "Usually bands want to play shows-- when they don't show up I just hope it's ok. I'm just glad these guys are ok."