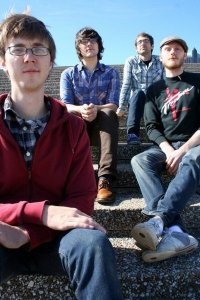 About three months ago, I quit So Many Dynamos. My spot was filled by my dear friend Nathan Bernaix, best known as the frontman for Target Market. Dynamos recently returned from its first tour with Nathan and are playing its first local show with the new lineup tonight at Off Broadway with Cold Bear Scout and The Lake. Nathan and I sat down to discuss his new life as a Dynamo.

Ryan Wasoba: Are you excited about your first local show in So Many Dynamos? Nathan Bernaix: Yeah, definitely. And I'm glad we took the route we did. I'm glad that we've been playing all these out of town shows first. There are much higher expectations for the band here. People know what to listen for and they would know what's not there. It gave me a chance to groom a little bit.

What was your reaction when you got the call? Well, I was surprised that you left the band. Everyone has always been really committed. It took me a while to warm up to the idea that I'd be in the band instead of you, that it wasn't going to just be a temporary thing.

Did you see my departure coming or that you were going to be asked to join? I got a message from Aaron before I talked to him. I knew things weren't so great on your last tours, and he said something was wrong and he wanted to talk to me. That's when I realized what it was, I sort of had an idea.

We had talked about maybe having someone come in as a touring member but I'd still be in the band. I think we all knew that wouldn't work, so I was really relieved when they told me that you'd be in for good. I was surprised only because I didn't think you'd be able. It came at a good time because I finished school not too long ago and I just quit my job to go on tour with Target Market, and that tour didn't happen.

How did the rest of Target Market react when you told them you'd be joining So Many Dynamos? They have been cool about it and really supportive. We're all friends, obviously, and I explained to them what was going on and they understood. We're not super active as it is and we all kind of get that. They all have other things going on. [TM bassist] Drew is going to law school and [TM drummer] Joe has been playing with the Matt Rowland Band.

I know Target Market made a push the last year or so to try to take things more seriously. Was it a conscious decision to relax a bit? Not really, it just kind of turned into that. We haven't had a big discussion about our future or anything like that. It just kind of happened, and me joining Dynamos sort of made it official. We're still playing shows and we still have potential to tour again. Dynamos are home more than Target Market is gone.

You've always been "the dude" in Target Market, so how is it being sort of a sideman in Dynamos? It's different but it's comfortable. I don't mind not being the dude. It's sort of a relief, really. I enjoy this role. I think I was ready for it.

How is performing with So Many Dynamos different than performing in Target Market? Well, the songs are a lot more technical. I have to stay more ahead of everything, I can't just lay back like in Target Market. There's more pedal work with getting the right settings, and that's sometimes harder than playing the actual guitar parts. So it's a little more challenging that way, and it's more energized because of the nature of the songs.

A big difference between So Many Dynamos and Target Market is that Dynamos are run a lot more like a business. How are you doing with that? That took some adjusting. It's a change of attitude, having to take things more seriously. It's completely logical and my mind knows that the business side needs to happen, but it's just a totally different world to me.

I saw on the Dynamos blog that you guys are starting to write some new material. What's that process like for you? It's really collaborative, which I'm not used to. And it's kind of taking a while to get songs together because it's so collaborative. Everyone is voicing their opinions and it has to pass everyone's test. Everybody in the band has their own standards and their own ideas about the direction they want the band to go.

This whole transition was relatively quiet. Were people on your first tour surprised to see you? I didn't really get too many comments on that, maybe because Aaron is the dude.

Maybe they didn't notice. It probably helps that you have thick black glasses. Yeah, probably.