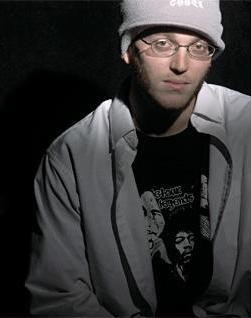 Tomorrow night at the Gramophone, come on out and bid a fond farewell to mover and shaker DJ Trackstar, who is heading west with his fiancee. The show is free, and will feature DJ Spec and special guest DJs to be announced. A to Z shot the busy man an email with some questions about his future -- and he took the time to answer them below.

Where are you going? San Diego, CA

What will you be doing? Will you continue doing music? C'mon! Of course! I'll be on the same hustles, just warmer and near a beach.

Why did you decide to make the move? I've had 28 freezing winters and I deserve a mild one. Plus I've been here ten years and I wanted a change of scenery. Also, San Diego being so close to LA allows me to make more music connections than being here, as well as helping my fiancee Camille's jewelry business break into fashion circles.

What will you miss most about St. Louis? The talent, the seasons and especially the cost of living.

What advice do you have for musicians in St. Louis? Any parting words? I hope the talent in St. Louis finds the success it deserves. As far as advice, I would just recommend learning as much as you can about the industry/scene you're trying to get into, being very realistic about where you are, where you're going, and how to get there. Also to be constantly working -- making a lot of mistakes, and especially learning from them -- is key.

What can people expect from your going-away show? A lot of dope music, performances from all the artists you'd expect if you listen to my mixes, and all around good times.

What new music do you have in the pipeline we should know about? And how can people keep up with you after you leave? As usual, I've got five to six projects I'm in the middle of right now...new Boogie Bang, Classickness, and Still Dreamin are all on the way, I just did a mixtape with a producer named J. Cardim that was hosted by Jean Grae, I'm dropping a mix called "Best Rapper Alive?" this week that I'm very excited about, and soon I'll be dropping a mix with Tef Poe. I have more ideas than time, that's for sure.

People can still catch me the last Sunday of every month on Sirius/XM radio (Hip Hop Nation is the name of the station, 7-9 Central) with Finsta and Vandalyzm on DJ Jamad's Afromentals. We do a one-hour segment called RMF Radio that is hilarious and very dope. I'm on Twitter and Facebook, and my mixes always drop at SmokingSection.net. And for people who still like physical copies, my CDs will still be at Vintage Vinyl, Downtown Music and Culture Vibes.