For the second time in fourteen months, Bruce Springsteen and the E Street Band played a non-stop, sweat-soaked, guitar-tossing, request-taking concert at the Scottrade Center. Springsteen's mission was clear: During "Working on a Dream" he claimed that he and the band were in town to "fulfill a solemn vow to rock the house." Few vows have ever been so redeemed. With a super-sized version of the E Street Band (Bruce included, there were often twelve people on stage, including two back-up singers and a trumpet player), the Boss played three hours of old and new tunes, taking no breaks between songs aside from his trademark "Hunh! Two! Three! Fo!" countdown. 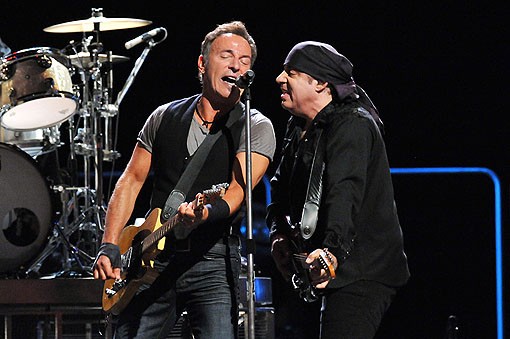 The show began with a brand-new song called "Wrecking Ball," which Springsteen wrote in honor of (and from the point of view of) the old New York Giants stadium. It began mostly unadorned, with Bruce carrying the song on his Telecaster until the band kicked in with a double-time tempo shift. From there, he dusted off the growling rarity "Seeds" and moved into the Darkness on the Edge of Town nugget "Prove It All Night." View a slide show from last night's Springsteen concert.


Springsteen didn't waste any time ingratiating himself to the crowd -- not that he needs the help, as few fan-bases are more ravenous and adoring that Bruce's. Four songs in, the crowd roared to the familiar organ chords of "Hungry Heart" as Bruce stalked the platform with his mic outstretched, encouraging the first of many sing-alongs. Then, mic in hand, he wandered into the general admission area, perched on a barricade, and proceeded to sing the next verse. As the song wound down, Springsteen saw that the quickest way back to the stage was through the crowd, so, like most 60-year-olds, he crowd-surfed back home as a sea of hands caught handfuls of sweaty black denim. Again: This was the fourth song of the set. Who else works harder to win over a crowd that takes absolutely no winning over? 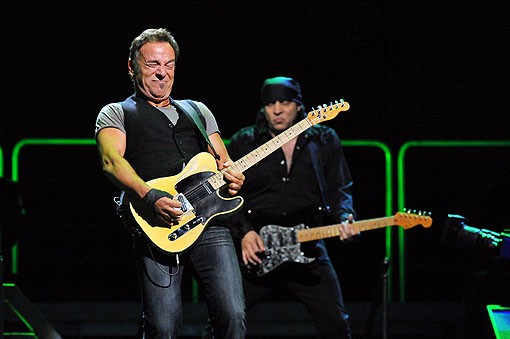 As promised, Bruce and company dusted off 1975's breakthrough album Born to Run and played it front to back. It's an epic album in every sense of the word: it cemented his status as a once-in-a-lifetime talent by pairing desperate, cinema-quality songs with intricately arranged, Spector-indebted sonics. On stage, however, there were moments when the energy lagged and the totemic power of these songs came off as rote. Opening cut "Thunder Road," which always manages to induce goose bumps with its piano-and-harmonica opening salvo, wilted as soon as the band kicked in. Likewise, "Born to Run," a standard set-closer, was performed with all the house lights turned up so, presumably, the wall between performer and audience momentarily disappeared. In reality, it felt slightly invasive to watch the crowd shout along the words in their moment of shared ecstasy. There's a reason people make love with the lights off.

Born to Run is a record that comes in waves. For every yearning "Thunder Road" there's a party-starting "10th Avenue Freeze-Out." In that sense, "Night," certainly the most lightweight track on the album, provided a little release from the drama of songs like "Backstreets" (which featured an extended coda that found an overwrought Bruce moaning wordlessly at length into the mic). But it was all a steady climb to the album-closing "Jungleland," which featured, as always, Clarence Clemons' career-defining saxophone solo amid the romance and tragedy of Bruce's lyrics. At the song's end, the E Street Members who recorded Born to Run - Springsteen, Clemons, drummer Max Weinberg, pianist Roy Bittan, and guitarist Steven van Zandt - came out for a bow, and Bruce gave a shout-out heavenwards to departed organist Danny Federici.

If the Born to Run section lagged in places, the second half of the show more than made up for it. Springsteen is at a place where even his songs from the past decade can match up with his golden-era hits -- if not always in quality, then certainly in fan response. The band reconvened for "Waiting on a Sunny Day" from 2002's The Rising, and Bruce -- ever the rock & roll Santa Claus -- brought up a six-year-old boy to sing the chorus. (He even included the requisite "Come on!" and instructed Clemons to "Take it, Big Man." This kid has studied his bootlegs.) Other songs from The Rising -- the title track and "Lonesome Day" -- were standouts as well. "The Rising" in particular found Springsteen channeling the dual forces of loss and hope contained in that song, singing the last verse with his forearms protecting his head as stage lights colored him an eerie yellow.

As the E Street Band marched through the set, the energy seemed to snowball with little chestnuts (a juke-joint-boogie version of "Working on the Highway") and time-tested favorites (the can't-miss "Promised Land," which provided a communal fist-pumping highlight). And as is his custom these past few years, Springsteen wandered into the front row of the crowd to pluck out homemade signs bearing requests. He gathered an armful and took them on stage to consider his options and made his first selection, and artful poster with a simple message: "Bruce Play Piano." Sure enough, he sat down at Roy Bittan's white baby grand and, after asking a stagehand to finagle a lyrics sheet, proceeded to play a stunning rendition of 1973's "For You." Neither his occasional fumbles on the piano nor the song's endless string of verses could stall the naked beauty of that moment. I could have heard another six songs done in the same style. 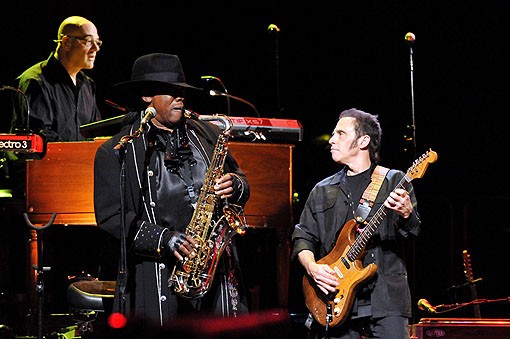 But the piano reverie was a brief one. Bruce picked up more sign-requests and tore through a few: Chuck Berry's "Roll Over Beethoven," the so-called "Detroit Medley" (which includes Mitch Ryder's "Devil with a Blue Dress") and his own "Surprise Surprise." Much like last year's show, Springsteen pulled up two lucky young ladies (and one lucky middle-aged lady) to dance with him during an endless "Dancing in the Dark" (I felt bad for the poor keyboardists, playing that synth line ad nauseam.) Having nowhere else to go, Bruce and the E Street Band ended with "Rosalita," perhaps the only song that could put a cap on such a set. It was here that the guest trumpeter earned his keep, adding the proper mariachi flair to this Latin lover's ode.

For even the most casual fan, finding fault with a Springsteen show is mere nitpicking. His energy never flags, his songs almost always connect, and his good humor, grace and boundless love for rock & roll are transmitted to the nosebleeds. Was it as good as last year's show? Probably not. But go ahead and name another artist who can touch what Springsteen does, night after night, year after year.