Show Review + Setlists: Dinosaur Jr and Lou Barlow and the Missingmen at the Pageant, Wednesday, October 14 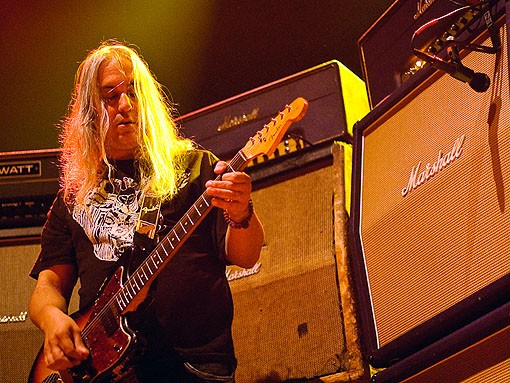 The signs on the doors of the Pageant box office and entrances said it all: "Earplugs are available for purchase at the bar and soda areas." The occasion? Dinosaur Jr. was in town last night, and the band is notorious for being loud. How loud? Well, friends who saw the trio's show in Columbia a few years back swear it was one of the loudest shows they've ever been to. And during the show, bassist Lou Barlow said that somebody called the venue last week and swore they were going to kill the band - because that same Columbia Dino Jr show ruined their hearing.

I generally wear earplugs at shows anyway, so tonight was no exception. And I was skeptical about the volume - could it really be that bad? A few times during the 90-minute show, I took the right earplug out a few times, just to see how loud it really was. "Huh," I thought. "After last night's Mastodon/High on Fire/Converge/Dethklok show, this isn't bad at all." Right? Wrong. It's about 12:30 a.m. right now as I'm writing this, and the hearing in my right ear is a wee bit muffled. It was worse 90 minutes ago when I left the venue. Huh. Lesson learned.

The cause of this deficit first and foremost is Dino Jr vocalist/guitarist J Mascis. The long-gray-haired frontman - who stuck to a casual black T-shirt and jeans - spent the show in front of six huge Marshall amps, configured in a slight curve around him. He rocked back and forth in front of the stack, like a newborn swaddled (and comforted) by the intense sound. Every so often, squalls of feedback or distortion would escape from his side of the stage, although these burps were perfectly logical in musical context.

Not to be outdone, Barlow's stack of amps was also taller than he was (although it was half as wide as Mascis' arsenal). Dressed in ripped jeans and a brown T-shirt, he played the bass like he plays guitar, all loose-limbed and nonchalant. And drummer Murph - casual in camo shorts and a T-shirt, like he just got back from watching the game - handled the songs with confidence and precision, but no flash. (He doesn't need to.)

But this crushing volume would be pointless if it wasn't artfully performed - and Dino Jr's amalgam of stoner-rock, psych-swirls and hardcore-punk certainly fit the bill. "Feel the Pain" was much slower in the verses and sped up at the choruses, culminating in an impressive display of quick Mascis strumming, so fast it looks like his fingers were a shredding machine. New tune "Pieces" was just as sharp as it is in the studio (and remains perhaps the poppiest thing Dino Jr has ever done). The one-two punch of "Over It" and "Raisans" each crashed to a halt, a harsh jolt which matched the former's chalky distortion and latter's unhinged tempo.

The show-ending "Forget the Swan" - chosen by audience vote; "The Wagon" and "Sludgefeast" were nixed - ended up the highlight. The band stretched out the song and let it breathe; Mascis actually switched guitars several times mid-song, much to the delight of the crowd. The mix of noise, improv, effects and structure gelled and reached transcendence - one of the few times this happened during the show. 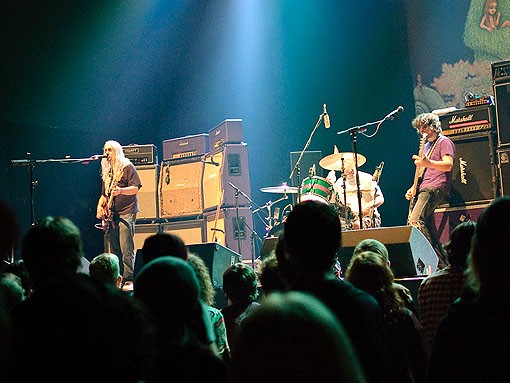 Indeed, the faster pace and strong ending perked up a concert that otherwise sagged for much of its first half, mostly due to setlist choices. Although Barlow's lead vocal turn on new psych-jangle nugget "Imagination Blind" was strong - spurring on chants of "Louuuu" from the crowd -- Farm's winding-road "Plans" was interminably boring, "Get Me" meandered in non-interesting directions and fellow older openers "Budge" and "Thumb" sounded rusty. A largely disinterested audience didn't help matters, either: Save for the pit, the tables and back of the venue seemed bored. Certainly there wasn't a lot to look at onstage - a banner of the cover of Farm and some sparse lights - but the lack of engagement permeated the atmosphere. 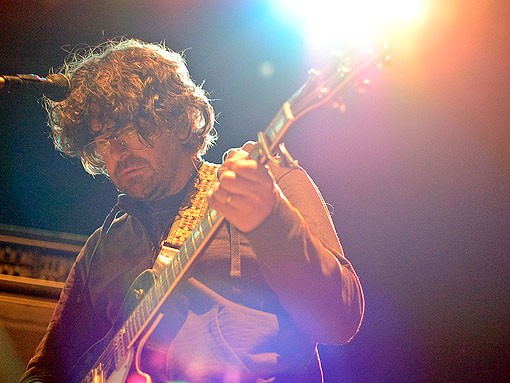 Lou Barlow also opened the show, with a solid solo set backed by his current touring collaborators, the Missingmen. (Fun fact: They just so happen to be members of Mike Watt's backing band, the Secondmen, which explains why they manhandled feedback and guitar effects with such ease.) Whether he's recording as Sebadoh, Sentridoh, Folk Implosion or under his own name, Barlow is a consistent songwriter - ragged acoustic and strident rock.

That came through in his 45-minute set, which focused on this year's excellent Goodnight Unknown and 2005's EMOH. Although the beginning started off slow, Barlow soon found his groove. "Puzzle" and "Too Much Freedom" had pleasing twang-rock edges, while the Missingmen's noisy background aided and abetted the fast punk tone of "Faith Defies the Night" and "Caterpillar Girl," a power-pop song with a coat of grime over it. The slow, stripped-down ending cut, "On the Face," unfortunately killed the momentum but was a special treat; it comes from a 2001 Sentridoh release.

Critic's Notebook: After hearing Barlow play "Home," it occurred to me that Snow Patrol pretty much had the U.S. success that Sebadoh should have - at least judging by how closely the former mimics the latter.

As for Dinosaur Jr: What a weird setlist. No "Just Like Heaven," no "Little Fury Things," no "The Wagon," no "Kracked," no "The Post."

Personal Bias: I've seen Mascis solo twice and once touring behind that record he did with the Fog. But never Dinosaur Jr.

By the Way: At about 4 p.m. yesterday, Vintage Vinyl said on their Twitter: "J Mascis has just left the building....spent most of his time shopping our vinyl section."