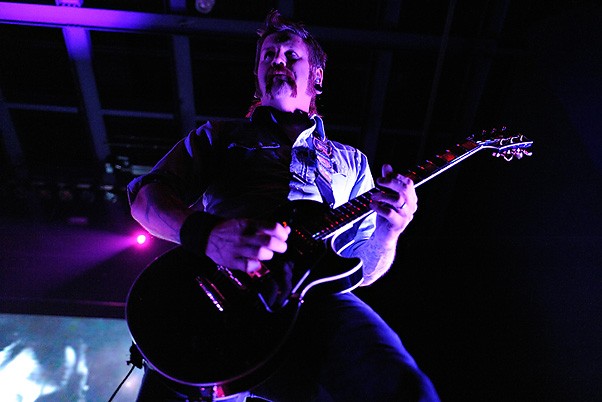 At one point, Converge vocalist Jake Bannon thanked the Pageant crowd just for being there - and acknowledged the diversity of the quadruple bill of which his band was a part. He noted that whether you were a "punk kid, a metal kid or a hardcore kid, you were there for the love of music." He was certainly right on all counts.

Although High on Fire went on at exactly 6:30 p.m., a healthy-sized portion of the crowd was already in place for the band. Accordingly, its half-hour opening set exhibited what they do best: sludgy, stoner metal, performed with precision and power. It's impossible not to nod your head in time to the trio's galloping tempos, whether they're unleashed at a slow trot or a bit faster, even if the band itself didn't move around much. Shirtless, tattooed vocalist/guitarist Matt Pike sounded like a jaguar in a wind tunnel, or Cookie Monster being eaten by a vulture. And volume-wise, imagine a freight train heading full-speed into a tornado. Then imagine this a few dBs louder. Presto: High on Fire.

Converge's set started abruptly: Kurt Ballou stood in the middle of the stage and casually started playing his guitar, like he was a roadie soundchecking. Then the other three members of the Boston post-hardcore band ran onstage - and for the next 40 or so minutes, Converge destroyed.

It's hard to describe a Converge show, because there's so much going on. Bassist Nate Newton continuously throws his body around violently stage right, as Ballou bashes out metallic punk riffs stage left. Now, all of this should seem counter to drummer Ben Koller's technical speedballs - but somehow, nobody's rhythmic precision ever wavers.

Lanky vocalist Jake Bannon was the focal point, however. As rubber-limbed as Frank Gorshin's Riddler, his movements were as sharp and on high alert as a sniper. (Oddly, at times these were as exaggerated as the Wizard of Oz's Scarecrow, too.) He frequently stood on the side of the stage, catching his breath as much as he seemed to be storing up energy to unleash more hawk-screeches and breathless, nearly wordless growls.

The band's set spanned its career, from Jane Doe ("The Broken Vow"), You Fail Me ("Eagles Become Vultures," "Last Light") and No Heroes ("No Heroes," "Heartache"). Converge also unveiled several new songs from the forthcoming (and absolutely killer) Axe to Fall, which is in stores next Tuesday. Highlights especially included the title track and a lightning-quick, melt-your-face "Reap What You Sow," which Bannon introduced as being "about karma."

But clearly, the crowd was there for Mastodon. (Perhaps the pit chanting, "Mas-to-don! Mas-to-don!" before the set was the biggest clue.) And the Atlanta band delivered exactly what its fans wanted -- no banter and no frivolity, just 80 minutes of metal, in all of its various permutations. 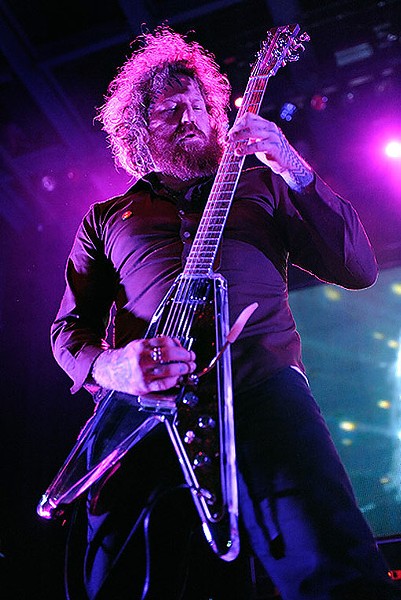 Anyone who doesn't like Mastodon's latest, Crack the Skye - a lumbering album that sounds like Ozzy Osbourne fronting a psych-prog band - probably wouldn't have liked the main set, which focused on the album. Much dirtier and less polished live, though, Skye came off well - from the minor-chorded Sabbath sludge homage "Oblivion" and repeated-punch-in-the-head chugging of "Divination," to the psychedelic harmonies and heavy, ball-of-fury choruses of "Quintessence" and ten-minute sprawl "The Czar."

Mastodon is such a well-oiled live band, that it's hard to really pinpoint why each member is so vital. More specifically, it's too easy to take the quartet's complex parts for granted. Guitarist Brent Hinds, his unruly curly hair surrounding his face like a lion, his Lucite flying-V guitar held vertically at times, lost himself in the tangled interplay with guitarist Bill Kelliher. When he wasn't near the mic, Hinds hovered near drummer Brann Dailor, leaning back impressively, as if playing limbo. Dailor, meanwhile, pounded out his parts like it was nothing to follow gnarled textures and ten-minute songs. (Surprisingly, though, the drums sounded rather dry, and bassist Troy Sanders' parts weren't as eardrum-bursting as they've been in the past.)

The encore began with several minutes of trippy video: images of the band's album covers flashed on a gigantic video screen above the stage, one after another. This actually ratcheted up the trippiness from the main set: Throughout that, the giant video screen matched the mood of Skye, thanks black-and-white movies depicting creepy images -- a skull on fire, wizards hovering over a cauldron, dragons on fire, b-movie horror scenes -- multicolored Tesselations and patterns and a Star Wars-like projection of stars hurtling through space.

All had the effect of disorienting, which worked well for the psychedelic-leaning encore, which revealed the band's thrashier, faster roots and ended with a cover of the Melvins' "The Bit."

Critic's Notebook: I'm sick and bailed before Dethklok. What did I miss? And does anyone have Mastodon's exact setlist in order?

Special shout-out: To the blond-haired little boy near me who couldn't have been more than five years old, who was throwing the devil horns and pumping his arm in the air during Mastodon. Son, you were the cutest thing I've seen at a show in eons - while simultaneously being the most metal elementary schooler I've ever seen.