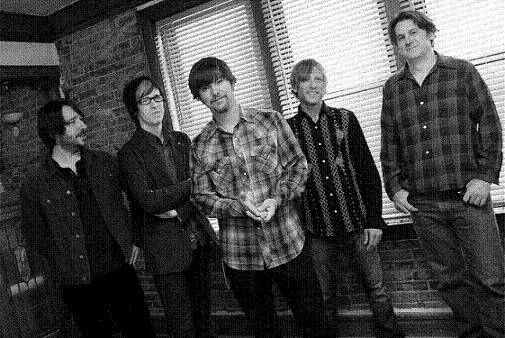 *According to the Austin Chronicle (via Chromewaves), Jay Farrar is setting unreleased Woody Guthrie lyrics to music (shades of Wilco's Mermaid Avenue albums with Billy Bragg). Farrar's collaborators include My Morning Jacket's Jim James, Centro-matic/South San Gabriel's Will Johnson and Anders Parker. The album is reportedly in the mixing stage, says the Chron. In other Son Volt news, guitarist Chris Masterson is no longer in the band. He's been replaced by James Walbourne, who has played with SV before -- and, incidentally, with the Pogues and (recently) the Pretenders.

*Troubadour Dali's CD release show didn't happen this past weekend, due to delays with the artwork. Euclid Records' Joe Schwab -- whose newly launched Euclid Records label is putting out the disc -- said he'd keep us posted.

*Pokey LaFarge has a new MP3 up on his website, a plaintive little number called "Josephine." He's having a CD release show on Sunday, October 18, at Off Broadway -- all details TBA.

*DJ Trackstar, Vandalyzm and Black Spade are all in Atlanta tomorrow night, opening for Black Milk and ex-Lou resident Gotta Be Karim. Grab a mixtape featuring all of these acts right here. Trackstar and Rockwell Knuckles will also be in Atlanta from October 1 to 3 for the A3C festival. Also on the bill are Kidz in the Hall, Big Pooh and a ton of other underground movers and shakers.

*In his weekly hip-hop email newsletter, Trackstar also reports that Wash U is having a hip-hop week:

"The event is planned to span from Nov. 9-14; different groups will be hosting events representing the different elements of hip-hop throughout the week and on Friday, Nov. 13th we will be hosting Rap Sessions, a nationally-recognized panel that facilitates discussion on current social/racial issues through hip-hop. On Nov. 14th, we are throwing a finale event that includes a small bboy jam during the day and a concert at night featuring illPhonics and RJD2."

*A few show notes: Nico Vega's October 1 show at Cicero's is now happening on Monday, October 12 at the Firebird. The theatrical/glammy LA band had the chance to open for U.K. superstars Manic Street Preachers on some rare U.S. appearances on the original date....The AP Fall Ball tour date featuring the Academy Is..., Mayday Parade, Set Your Goals and more, which was scheduled for September 29, has been canceled due to Blink 182's show being moved to that night...Very quietly, no-wave/post-punk shriekers Screaming Females are playing at the Gargoyle on Tuesday, October 6.

*And finally, R.I.P. DJ Roc Raida. Known for his work with Busta Rhymes and the X-Ecutioners, he passed away due to "complications from a mixed-martial-arts accident," according to MTv.