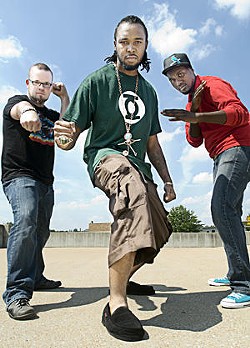 he hip-hop-themed comic book project from Tef Poe, DJ Champ, and illustrator Benjamin Sawyer, drops tonight at Star Clipper, with a release party that kicks off at 6 p.m. Stop by, grab a free copy of the book, and meet the artists.
If you haven't heard, here's the word:

From Flavor Flav's oversize alarm clock to the diamond-encrusted chains of the crunk era, bling has long been a part of hip-hop culture. Comic books, on the other hand, are a relatively new addition, with rap-influenced illustrations from Public Enemy and Madvillain among the only noteworthy examples. Now, thanks to Age of Illumination, an ambitious new project from a trio of St. Louis artists, the two elements will be united with a comic book about a mythical piece of bling.

Age of Illumination consists of a comic book and a concept album. The creators are local rapper Tef Poe (given name: Kareem Jackson), Nicholas "DJ Champ" Randall and comic-book artist Benjamin Sawyer. The first issue of the comic book, a release party for which will be held at Star Clipper Comics on September 16, is an odd mix of historical fantasy, spiritual mumbo jumbo and glorification of the St. Louis underground hip-hop scene, starring Tef Poe and DJ Champ as the leading men.

Read more about the project by clicking here.