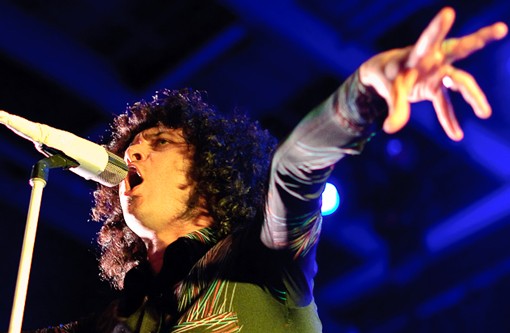 When the Mars Volta unleashed its 2002 debut EP, Tremulant, some critics cheekily tagged the band "Punk Floyd." Given that vocalist Cedric Bixler-Zavala and guitarist Omar Rodriguez-Lopez cut their teeth in the castle-storming emo-core outfit At The Drive-In, it seemed natural that "punk" would the predominant word in their freshly hatched group's nickname.

Seven years later, the band's psychedelic and progressive tendencies -- lengthy jams, epic guitar solos, trippy vocal effects -- have risen above mere fascination and embedded themselves deeply into the band's core. Last night at the Pageant, the Mars Volta was so prog-rock (audience participation: "How prog-rock was it?") that when I noticed the gong hanging behind Thomas Prigden's drum kit, I jokingly wrote "Gong Count" on my notepad. By the time the house lights came on -- as unrequited cheers for an encore continued -- I had drawn seventeen tally marks.

The gong mainly came into play between songs, the down-time when keyboardist Isaiah "Ikey" Owens and keyboardist/percussionist/general team player Marcel Rodriguez-Lopez created soundscapes in an eerie blue glow. The pace of these transitions was rather plodding and the MacBook on Marcel's keyboard rig made me wonder about the source of the textures, but they existed for function rather than focus. After a mind-melting aural work-out like Tremulant's "Eunuch Provocateur," any chance for the band or crowd to catch their collective breath was welcome. 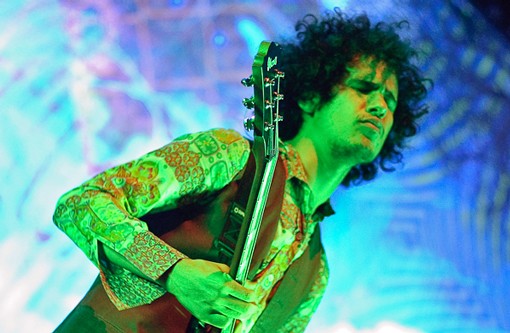 Although the Mars Volta often finds itself conceptually stuck in '70s psychedelia, its members have achieved futuristic levels of proficiency. Omar Rodriguez-Lopez, once a technically average but fearless axe-man, has become a full fledged guitar hero (a claim recently validated by the production of his own signature model Ibanez guitar, which he played all evening). In a tan vest, and with his afro sagging under the weight of his sweat, he resembled a young Carlos Santana.

This comparison was particularly apt when the band's Latin flair seeped into his solo during the De-Loused in the Comatorium standout "Drunkship of Lanterns." Sonically, Omar stayed relatively in the box, opting for his pedal board's rock & roll standbys of phasers, delays, and a wah pedal. The wah was occasionally unfortunate, as it limited his on-stage motion and brought more attention to the "oh face" he makes when he's really "feeling it." 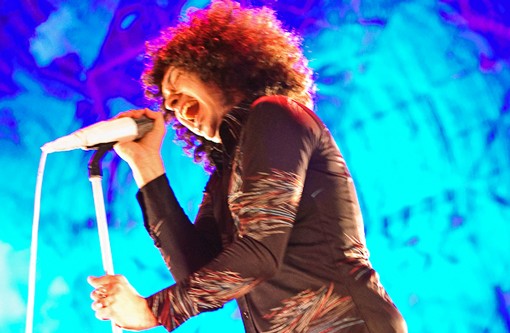 Cedric Bixler-Zavala, on the other hand, was a firecracker. He was Jim Morrison, Iggy Pop, Henry Rollins and former Refused frontman Dennis Lyxzen all at once. With microphone in hand, he jolted, slid, shook, leaped, and seized without taking any quality away from his elastic vocals. He writhed on the floor during one of Omar's more chaotic improvisations as if he was attempting to mate with the soundwaves emitting from the massive Orange amplifier. And he even pulled out some of his old ATDI moves, specifically placing both hands on the bass drum and jumping into a mid-air donkey kick.

Perhaps Bixler-Zavala's most impressive move, however, came at the conclusion of "Since We've Been Wrong," the single from this year's Octahedron. He tossed his custom white mic stand like a baton, whipping its custom white mic cable in the air. After one full rotation, he caught the stand by its boom extension and was singing into the custom white microphone one swift beat later. You can take the frontman out of the sassy emo-core band but, thankfully, you can't take the sassy emo-core out of the frontman.

The energy on stage was undeniable. Owens pounded his synths so intensely that his keyboard stand trembled. Bassist Juan Alderete seemed to take note and kept his legs spread as if bracing himself from toppling over by the sheer volume of drummer Pridgen. As rabid and metronomic as he was, Pridgen was the only disappointment in the Mars Volta's current incarnation. Behind the kit, he painted with only one loud, fast color. The band's oldest material suffered the most from Pridgen's one-dimensionality; "Drunkship of Lanterns" in particular lacked the subtlety or dynamic range that former drummer Jon Theodore brought to it.

The set concluded with the sharp ending of "Wax Simulacra" -- which meant that after almost two hours, the band had only performed eleven songs, drawn out by extended improvisations. It's hard to argue against the accusation that the Mars Volta leans towards self indulgence (seriously, there was even a bass solo).

But I realized something while Marcel Rodriguez-Lopez vigorously shook his maracas to "Eunuch Provocateur": Despite all of the band's technicality and wankery, in a very traditional sense the Mars Volta makes dance music. Cedric and Omar wear their Floyd and Yes influences on their sleeves, but salsa music runs through their veins. If they turn a six minute song a sixteen minute song, it's simply because they love what they do, it makes them feel good, and they want to feel good for as long as possible. Judging by the kid in the tie-dyed t-shirt dancing his Grateful-Dead-loving ass off on the Pageant floor, the Mars Volta is indulging more than just themselves.