In June, power-pop darlings Matthew Sweet and Susanna Hoffs released the second volume in their covers series. Under the Covers, Vol. 2 focuses on the '70s -- which means the album spans prog (Yes' "I've Seen All Good People"), sappy folk (Carly Simon's "You're So Vain"), power-pop (the Raspberries "Go All the Way") and rock royalty (Tom Petty's "Here Comes My Girl"). Sweet rocked the Duck Room in June -- and Hoffs is playing the Illinois State Fair this weekend in Springfield with the Bangles -- but a few weeks ago, the pair took time to chat with me about their new collaboration. Read on below to find what rock icon nearly produced a Bangles record -- and how Sweet felt about his trip to the Lou. 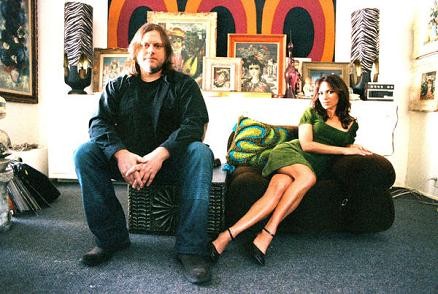 Annie Zaleski: How on Earth do you whittle down what songs you want to cover for these? Susanna Hoffs: It's difficult, because after making the Under the Covers, Volume One, which was all '60s, we thought, "If we ever do a volume two, we'll just keep doing the '60s," because we sort of identified the '60s as the most influential music [decade] for us. And that's something Matthew and I shared. But then when it came time to do volume two, we started exploring the '70s and we realized there is this insane amount of amazing songs that actually were sort of life-changing songs for both of us. So it was like, as Matthew says, [a] haphazard process of randomly coming up with different songs as they crossed through our minds.

It's like making a mix CD of all your favorite stuff. SH: Yeah! Exactly like that. Matthew Sweet: Very free for us, though. We don't plan the whole list. As we think of something we might want to try, we just add it on then.

What was the most surprising song that arose in that fashion? SH: I would say the Yes song. MS: Yeah, the Yes song. When we discovered we both loved Yes so much, that was really exciting. And then to get Steve Howe from Yes to play lead guitar on it, was, like -- we went insane.

Is that intimidating, having him play on his own song as you're covering it? MS: A little bit. We wanted to make sure what we sent him to play on was good [laughs]. We tried really hard to get it right. It was done through the Internet sorta. We sent emails back and forth a lot, and when he had a little bit of studio time extra, he got in one night and did his parts. And then they came back over. We've never actually met in person, but we feel like we know him.

How did the Lindsey Buckingham collaboration come about? He's such an amazing guitar player. Was that also the Internet, or did you get to that in person in LA? SH: We did it in person, and we both know Lindsey. Oddly, I can't remember how we ended up all in the studio together working...Matthew, for a soundtrack? MS: There was this year or two in the '90s where Lindsey was working on a solo record over at what's now called Cello Studios, which is the original Western studio -- or the part called Western of United Western [Recorders], which is a classical studio. They did Pet Sounds by the Beach Boys there. It's next door to a place called Ocean Way.

So Lindsey was working over in Cello, and during that year I went in several times to do different little one-off things. And somehow during that, we were working on a cover of [Walter Egan's] "Magnet and Steel" and Lindsey ended up playing on it. We would just see him and hang out at each other's sessions and stuff. So this was kind of a reunion after many, many years for us to do something with Lindsey, cause Sue also sang on that record. SH: And I also have gotten to know Lindsey over the last few years, because our kids are friends. MS: Lindsey's wife is kind of a buddy of ours too. SH: I began to know Lindsey socially...and I just remembered that actually, I had met Lindsey even before that session, Matthew. I met him because he was interested - this is funny that I'm remembering it now - he was interested in producing a Bangles record. MS: Wow.

Really. SH: So we went up to his house - he was still in that house when I met him again socially through all the kids playing together. It was back in the '80s, we went up and had a meeting with him. Yeah, so I've known Lindsey on and off for awhile.

That is so crazy. And nothing ever came of it? SH: No. the Bangles sort of...there was a point at the end of the '80s where we went our separate ways for awhile. So we never did end up working with him.

I was going to ask you that, too. Do you have anything in the can? I heard conflicting reports - that there's stuff done and there's not stuff done... SH: It's not really done, no. but we're making progress.

How long have you been working on that, then? MS: Just really a couple of months. We've just done the first few songs, but it's amazing. Those guys are so great. People are gonna love it.

It's the harmonies. That's what I like about your covers records - the harmonies. SH: Thanks. MS: Oh, cool. That's the total Bangles thing. That sound when they all sing together -- it's very, very distinctive.

The covers record - what's the most fun song for you guys to put together to play? SH: They're all fun in different ways. We just did this acoustic show at the Grammy Museum -- there's a new, very nice, state-of-the-art venue [there], [a] little tiny, intimate venue. We just played everything with just acoustic guitars. It was a whole different experience. For me, a lot of it is just the thrill of getting to sing these songs. A fantasy, 'cause when you're a kid you're singing along in your room or your mom's driving you, and you're listening to the radio and singing along in the car. For us to be able to take these songs on and do them - it's fun. MS: It's really just a fun excursion for both of us. Very not high-pressure.

Matthew, I like when you were singing on the Tom Petty cover. I could just tell from your voice, you were having so much fun singing that song. MS: [laughs] we could have done so many different ones. There's so much more...we did record almost 40 songs. We could have kept going. There's just a lot of different movements of music happening in the '70s that make it really diverse.

How long did it take you guys to put the whole thing together? SH: There were a lot of breaks because of various things that came up. I had a few Bangles tours. The Bangles are always somewhat under-the-radar, but we actually tour on-and-off all year. And we've been doing that for awhile. And Matthew was working on his last record, Sunshine Lies, and he also produced a band called the Bridges. So there were little breaks. It took longer than one would think. I guess it was a couple of years, right, Matthew? MS: I think so, but it's important to stress that we don't really labor over these records. We work hard, but the total time is probably not that much. SH: We sort of squeeze it in between our normal day jobs. [Laughs] It's a pet project, a labor of love for us.

Matthew, I saw you in June at the Duck Room in St. Louis... MS: Ohh, that's great! What a fun show that was!

The ending of "All the Young Dudes," that kind of brought the house down. Everybody was really excited, and there were just really good vibes there. MS: We had such a great time at that show. And I haven't been there in so long. We were so happy it went so well there. It was really a good one for us.