After reuniting for a show in 2005 - and playing the occasional gig since then -- '90s electro-industrial-rock darlings Gravity Kills are working on new music.

According to vocalist Jeff Scheel, who currently lives in Oklahoma City, the studio collaboration came about after the dissolution of his last musical project, Star 13. 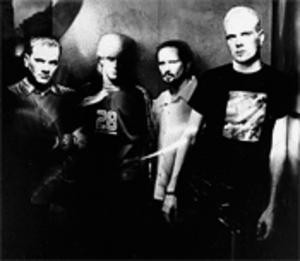 "I had written nearly 40 songs over the last few years that were in various stages of development as demos," he writes via email. "In a conversation with [keyboardist] Doug [Firley] about six weeks ago, I mentioned to him that we should do something with the songs.

"We had been kicking around doing a track or two together since last summer, but nothing had come to fruition -- plus I was worried about where my best material should go between doing some Gravity or my Star 13 project. We talked to [guitarist] Matt [Dudenhoeffer] and [bassist] Kurt [Kerns] and everyone was like, 'Why not?'"

The band is largely recording this music remotely, with Scheel at his Oklahoma studio and the other musicians at the Soulard's new Shock City Studios. (Firley is a co-owner of Shock City along with Chris Loesch, late of Full System Purge.)

The vocalist says that fans can expect new music "within the next couple of months," although not necessarily through the traditional label channels the band used in the '90s. (In fact, Scheel notes that the band declined to sign with a major label- "one of the RIAA big 4" - earlier this year.)

Gravity Kills released three studio albums and a remix album between 1996 and 2002. The quartet is best known for its song, "Guilty" -- which became a local hit on the Point before the band even had a record deal -- and eventually toured with the Sex Pistols.

"At the end of the day, I think we were all away from it long enough to realize that we had a very special chemistry," Scheel says. "We are not thinking about full length CDs at this point. We simply want to get in the studio and make music. Working on new music together is what the four of us miss the most about being in Gravity."