Caveat: I've been a Green Day fan since 1994 or so. And so I have a sneaking suspicion that last night's Scottrade Center show wasn't for me - even though the band ran through plenty of its bratty, jawing pop-punk hits.

But then again, last night's show wasn't for new fans, either - at least, not the hordes of elementary-school-aged children there with their parents. How do I know this? Perhaps it was because vocalist Billie Joe Armstrong said "fuck" approximately 756 times. Maybe it was the intense amounts of pyro and fireworks which were startling to even adults around me. Or wait, maybe it was the story he told about how once he drank his brother's piss, when both were in the bathtub together. Incidentally, a story that ended with him quipping that he's consumed piss plenty of other times after that. (Is there anything more awkward than a golden shower joke falling flat? Don't answer that.)

But perhaps the most awkward moment came during "East Jesus Nowhere," a song from Green Day's latest, 21st Century Breakdown.

And so on the premise that kids needed to be saved young, Armstrong announced that he wanted a kid to come onstage. Security hoisted a six-year-old Chicago girl named Alison from the front. (And yes, the entire crowd booed her hometown. Stay classy, St. Louis.) Armstrong did the requisite intro, whispered something to her, and as the song started up, put her hand to his forehead, as if he was a preacher. Then a bang of pyrotechnics went off and she suddenly dropped to the stage floor - and stayed there for the rest of the song.

Frankly, the scenario was kind of horrifying. As if to mitigate the event, Armstrong lead the crowd in a chant of "Alison!" and played a snippet of the titular Elvis Costello tune after. But the gesture was confusing: Was it supposed to be symbolic? Was it supposed to be fun? It didn't come across as either of those things.

But then again, that's sort of where Green Day's at in its career. Last night's two-hours-plus show was sometimes fun and sometimes deep - but never at the same time. The sharp contrast between the extremes, in fact, made the night very surreal and rather bizarre.

Its newest songs, both from Breakdown and 2004's American Idiot, are so huge and layered that they required two extra guitarists and a pianist to cover all of the parts. Paradoxically, these songs sounded much rawer and engaging than they do on disc. "The Static Age" resembled a really great, dark Alkaline Trio song, while the bashing power-pop of "Before the Lobotomy" conjured the Who, and fantastic set ender "Mass Hysteria"/"Modern World" was the kind of yowling punk speedball/Clash homage the band can write in its sleep.

But many new tunes came off as heavy-handed and needlessly preachy, especially because those in the crowd just seemed interested in pogo-ing and dancing (and not thinking about Messages). And in fact, the show didn't really click until an appearance from the Lookout! Records-era classic "2000 Light Years Away," which segued directly into a shit-hot cover of Chuck Berry's "Johnny B. Goode," in a nod to our hometown hero. These chestnuts kicked off a fast, furious string of unassailable hits: "Welcome to Paradise," "Basket Case," "She" and "When I Come Around."

This part of the night by far was the most energizing and fun, and not just because of nostalgia. Lithe bassist Mike Dirnt did his quick-step martial-arts-esque moves with the precision of a superhero. Wee-statured Armstrong - whose puffy black hair made him look like a darling woodland creature - didn't stop shaking his head, running around the stage and bashing out guitar chords. And drummer Tre Cool, while maybe a bit less manic than he was fifteen years ago, hasn't lost a step; he pounds out rhythms like a machine. 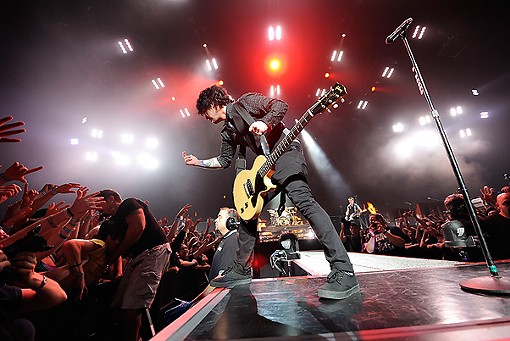 Now, you can't fault Green Day for not wanting to write variations on the same song for its entire career. That works for some bands - cf. the Ramones, Descendents - and doesn't for others. Ambition isn't a negative thing; it's certainly admirable. And in reality, Green Day's lyrical topics haven't changed that much; its songs have just moved from suburban ennui, insanity and boredom, to suburban disgust and questioning the status quo when you're stuck in suburbia. It's just a strange and intriguing thing, to see a band be so popular - and yet still not really fit in anywhere.

Franz Ferdinand played a terrific, disco-riffic 30-minute set in front of a crowd that couldn't care less. Seriously, I was watching the GA section and was kind of amazed that people didn't boogie to the dance beats. Even hit "Take Me Out" barely spurred people on to cheer and move. Did they have to restrain themselves?

The lack of enthusiasm was a shame, because the Scottish quartet has become even tighter since it was last in town at the Pageant in September 2005. In fact, Franz's amalgamation of Britpop, post-punk, glam, electro and disco still sounds unlike anything else out there, five years after the band released its debut LP. First-album cuts "Michael" and "This Fire" stomped with the precision of a surgeon's scalpel, while "Jacqueline" began with vocalist Alex Kapranos crooning like a cabaret singer.

"Do You Want To" was slowed down into a sinewy glam strut reminiscent of David Bowie's "Watch That Man," while the keyboard-decorated electro-funk highlight "Lucid Dreams" (from this year's Tonight: Franz Ferdinand) was equally askew. The band, to its credit, didn't notice the indifference. Vocalist Alex Kapranos frequently climbed on the drumkit and scissor-kicked-leapt off, while guitarist Nick McCarthy's strumming was jaw-droppingly fast.

Green Day Setlist: "Song of the Century" "21st Century Breakdown" "Know Your Enemy" "East Jesus Nowhere" (with snippet of Elvis Costello's "Alison" at end) "Holday" "The Static Age" "Before the Lobotomy" "Are We the Waiting/St. Jimmy" "Boulevard Of Broken Dreams" "2000 Light Years Away" "Johnny B. Goode" (Chuck Berry cover) "Hitching a Ride" "Welcome To Paradise" "When I Come Around" snippets of: Black Sabbath's "Iron Man" / Ozzy Osbourne's "Flying High Again" / The Kinks' "You Really Got Me" / Motley Crue's "Shout at the Devil" "Brain Stew" "Longview" "Basket Case" "She" "King For a Day" "Shout!" (cover, with snippets of the Doors' "Break On Through" and Tom Petty's "Free Falling" interspersed) "21 Guns" American Eulogy ("Mass Hysteria"/"Modern World")

Encore: "American Idiot" (had to split - what came after?)

Franz Ferdinand setlist: "No You Girls" "Michael" "Do You Want To" "Jacqueline" "Take Me Out" "Lucid Dreams" "This Fire" "Ulysses"

Critic's Notebook: *Before the show, the mention of the word "Obama" on a screen above the floor -- people could text in messages to amuse themselves -- drew riotous, raucous boos. I'm trying to wrap my brain around the fact that at a Green Day show -- okay, or a punk show in general -- our Democratic president was booed.

*During "Know Your Enemy," Armstrong stopped the song suddenly, and told security to get a flashlight out of a fan's face, "because she's just trying to take a picture." Later in the set, he hauled a very-stoked teenage girl onstage, who had a camera in tow and received photos of her appearance.

His laissez-faire attitude about this gave me pause, especially because at the door, people were told very adamantly to take cameras back to their car. Now, this isn't out of the ordinary at all. But everyone in my section had cameras -- and was taking video and photos. That's not even including those around me with fancy cellphones and iPhones taking video and photos.

And sure, sometimes it's band management dictating camera policy, and sometimes it's venue policy. But I see this disconnect constantly at big shows now, and am wondering when something's gonna give. When a band is cool with taking photos - and hell, encourages them - why are fans being treated like criminals? I'm genuinely curious.

*Later in the show, Armstrong acknowledging that Crufest was also in town, said he saw Motley Crue when he was thirteen and that they were great -- and then played a bit of "Shout At the Devil." Awesome.

*During "Longview," the band called up fans to sing the song. The second one beckoned looks like Andrew W.K. -- long hair, tall, huge. He does a good job, he's running around the stage climbing on the drum kit, etc.

But when he decides to leave the stage, what does he do? Why, he takes a running leap and STAGE DIVES into the crowd -- and people can't catch him, because he's too heavy.

There was a huge collective GASP from the crowd, and you see him start to kind of bob up from the masses, kind of. But the epic stage dive is just not happening.

The members of Green Day are cracking up hardcore onstage -- so much so that Billie Joe says into the mic, "You stupid motherfucker."

By the Way: My show partner last saw Green Day in 1992, and she lived in Berkeley in the early '90s. She also spotted Tre Cool backstage, dancing to Franz Ferdinand during its set. Aww.