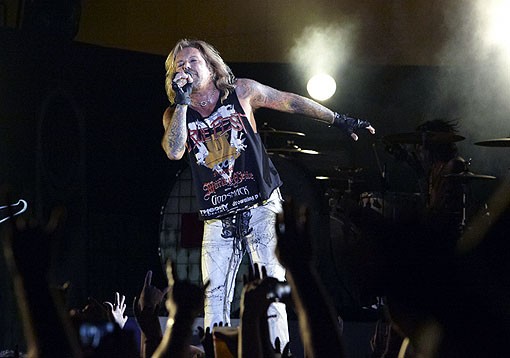 (See a photo slideshow from the concert.)

This summer's Crue Fest attracted the same black-leather audience, from hawt chicks to motorcycle mamas and all the men who love them, that Motley Crue has been pulling for over thirty years. On a stage lavishly adorned with medical paraphernalia, the Crue performed the entirety of Dr. Feelgood in celebration of its 20th anniversary (yes, it's been two decades). All the usual suspects were rehashed, of course: the wrack-and-ruin of the title track, "Kickstart My Heart," and the roadhouse raunch of "Same Ol' Situation (S.O.S)." Even those songs rarely (if ever) played live were met with rapturous applause from the packed crowd.

What the Crue has always lacked in imagination they have made up for in swagger and flash, and it was just that confidence which propelled them through even the dry-humpingest ballads. "Without You," already a candied crooner, went gooey in the summer air. Some of their output over the years may exhaust negative superlatives, but you can't argue (too much) with an album that gets groins going and fists flying as easily as Feelgood does.

Confidence, however, is no substitute for commitment. The top-to-bottom design of the show precluded any real spontaneity or interactivity, despite singer Vince Neil's stage(d) skips or drummer Tommy Lee's Jagermeister dispensations to the pit. Later-set classics like "Shout At the Devil" and "Girls, Girls, Girls," while standby salutes to dim wits and plastic tits, sounded stale and cruise-controlled. No doubt something so scripted -- lights, costumes and props, fireworks, rehearsed dance routines by slinky backup singers -- is to be expected, but when the form of a concert ritualizes its content, and not the other way around, then things will go MIA. Like, the songs.

Inspiring just as much (if not more) allegiance on the main stage, Godsmack--or, more precisely, frontman Sully Erna--destabilized limbic systems on 100-proof growlers including "Whatever," "I Stand Alone," "Keep Away," and "Straight Out of Line." Their new single, the bare-knuckle "Whiskey Hangover," received approving clenches from the (overwhelmingly male) audience, not least due to the anticipation for their upcoming album. By contrast, Theory of a Deadman had about as much edge as a marshmallow, though their more melodic songs--"By the Way," "Got It Made"--were a welcome antidote to Texas-bred Drowning Pool, whose menacing poundage of riffage, especially on fan-favorite "Bodies," can best be described as listening to a headache (in a good way, I suppose).

Meanwhile, among those on the second stage (the sponsored Monster Energy Stage, that is), hometown band Cavo celebrated their own milestone: the release of their major label debut, Bright Nights Dark Days. They seemed happy and relaxed, even though all the second stage bands performed on an expanse of asphalt that required constant migrations to and from the main stage. Chart-topper "Champagne" ended their set that included "Cry Wolf" and Transformers 2- soundtracked "Let It Go."

For their part, Rev Theory were all balls and bluster in "Favorite Disease" and "Far From Over," each a depth charge to romantic entanglements. It might just have been the smaller stage, but Theory had the best band dynamic of the day and blew off the stage like a prairie wind. Then again, it could also have been the second of three freebie Monster drinks I had by that point at the Monster Energy Tent. I finished none of them. Anecdotal evidence suggests that, being free, they were better than $4 bottled water but, being priced, they would have been ranked somewhere between gerbil piss and river-basin sludge.