The Countdown to Springsteen Starts Here 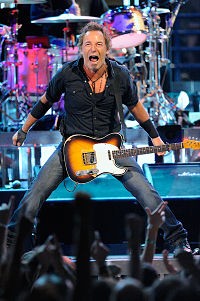 Yes, it's true that Bruce Springsteen won't be coming to town until October 25 and tickets don't even go on sale until Saturday. That, in theory, should give you plenty of time to get your lungs in shape for an evening of shouting "Bruuuuuuuuuce!" and maybe score the perfect vintage Stone Pony t-shirt off of eBay.

But still, you may find time weighing heavy on your hands. JamsBio is that rare magazine that has actually managed to anticipate the needs of its readers. One intrepid reviewer, known only as JBev, has taken it upon himself to go through the Boss' entire catalog and rank 200 of his songs in a project called No Retreat, No Surrender. (Yeah, that was John Kerry's campaign song. Don't let that little fact discourage you.)

JBev decided to start with the worst -- that's "Real Man" from Human Touch, the one Springsteen album that even the most devout fans will disavow -- and work his way up. As of today, he's made it to Number 41 ("Girls in Their Summer Clothes" from Magic).

What makes this project all the more impressive is that JBev has composed short essays about each song explaining the reasons for its ranking. He is not the harshest of critics -- 24 songs in, at 176 ("All That Heaven Will Allow" from Tunnel of Love), he admits, "From here on out, I can genuinely say that I like every one of the songs to come on the list and enjoy hearing them" -- but he is perceptive. Even if he is dead wrong about placing a gem "When You're Alone" from Tunnel of Love at 154, a full 24 spots behind a complete dud like "Queen of the Supermarket" from Working on a Dream.

Anyway, yeah, it's summer, time hangs heavy, especally in the afternoons, especially when you're anticipating the drama that lies ahead on Saturday morning. This is an excellent way to pass the time. Oh, and there are forums for further arguing.

Anybody care to venture a guess about what will clock in at Number One?