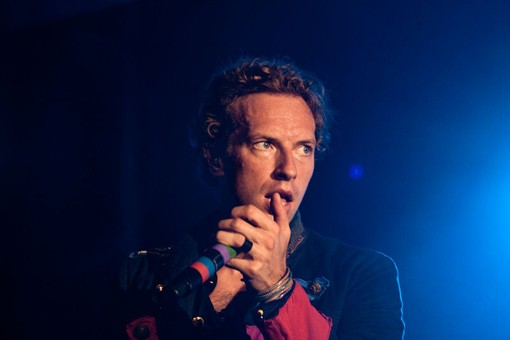 Last night at the Verizon Wireless Amphitheater, Coldplay delivered exactly the type of set you would want from it - and then some. That's not snark, either: For nearly two hours, the British quartet unleashed hit after hit after hit with little self-indulgence and plenty of spectacle.

In fact, the entire show was geared toward its fans. A tan, fit Chris Martin made sure to spend some time singing on the wings of the stage, making the cougars ladies in those sections squeal. The band set up on a satellite platform in the pavilion for fantastic, raved-up, electro-grooved versions of "God Put A Smile Upon Your Face" and "Talk" - think INXS and New Order, respectively -- and a solo-piano version of "The Hardest Part."

Just a few songs later, the band jogged to the lawn and did a quick, low-key acoustic set for fans there, highlighted by a cover Michael Jackson's "Billie Jean." And as every person left the venue, they received a free CD copy of the Left Right Left Right Left EP. I'm pretty sure that if I asked Chris Martin to come over and do some gardening for me, he'd be over in a heartbeat, wearing a crooked grin and bringing his own lawn equipment.

But this hospitality didn't feel like pandering, mainly because the band doesn't seem above its adoring fans. Coldplay frequently draws comparisons to U2 - and that band's "Magnificent" was one of the last tunes played before the show started - but the Irish quartet revels being in the stratosphere. Even its unscripted moments feel epic and important. Coldplay, however, seemed to thrive on being down-to-earth: The members of the quartet cracked each other up, grinned while busking on the lawn (and amused by Martin busting out a harmonica) and generally seemed to be enjoying themselves.

Martin especially came off like a lighthearted goofball. He false-started a song after someone's declaration of love seemed to distract, and he cracked himself up after flubbing announcing the name of St. Louis: "Pronunciation was never my strong point." He apologized for taking so long to get back to the city by assuring that they've "rehearsed this 142 times before" so the show would be worth it. And during "Viva La Vida," as the crowd chanted the final wordless croons, he dramatically sprawled out on the stage, as if he was too out of breath to continue. His onstage energy was also endless. When he wasn't prowling and pouncing like a champion boxer, he skipped around like a court jester- and during "42" even switched from piano to acoustic guitar and back mid-song, with impressive precision.

And sure, that particular song recalled Radiohead (the electro-tweaked breakdown) and U2 (specifically the acoustic-based strums of Rattle & Hum). But four studio albums into its career, Coldplay has assimilated its influences into a solid, unique sound. Rock, pop, Britpop, piano-rock - whatever the label, the band does it well. "Politik" featured strobe-ish lights and pounding heavy rock guitars, while the band slightly sped up Parachutes' big hit, "Yellow." Martin (impressively) took the piano for several songs, including a joyous "Clocks" and newer song "Glass of Water." Keyboards and organ dotted Vida tunes well, without overpowering their nuances.

The delicate, more sensitive Coldplay tunes - an acoustic version of "Green Eyes," a ruminative "Fix You" - perhaps revealed the secret of the band's success. The universal appeal of its lyrics shone through; their simplicity resonated in a very grounded, basic way. It became easy to see how detractors might find Coldplay's concerns - loss, heartbreak, comfort, finding home, finding love - insipid or pedestrian. But hearing these sentiments while surrounded by thousands of people is a very different experience - one that's restorative and triumphant.

After a brief opening set by '40s-esque rockabilly-blues act Kitty, Daisy & Lewis, Amadou & Mariam took the stage. The married duo hails from Mali; at this show, a bassist, keyboardist, drummer and two singers/dancers backed the pair. A melting pot of styles and influences - poly-rhythms, deep funk bass and Amadou's evocative guitar playing -- eventually coalesced somewhere between Talking Heads and Stevie Wonder. The danceable grooves brought the crowd to its feet by the end of the 40-minute set, a heartening response. Here's hoping they come back to town one day, perhaps at a venue like the Sheldon.

Videos already online, all of which are amazing quality: "42"

Critic's Notebook: I've been wrong all these years to say that Coldplay was dad rock. No, Coldplay is cougar-rock. The number of ladies at the show -- of all ages, mind you, but definitely of the mom-age persuasion - swooning for Chris Martin was surprising. It actually makes me wonder if some people despise Coldplay because Martin is such a heartthrob.

The band's stage accoutrements showed excellent attention to detail, and added to the show. Balloons filled with confetti floated over the crowd during "Yellow," while alien-esque spherical figures dotted the stage for the rest of the set. Martin also started a cell-phone wave - which was somewhat ridiculous, but it worked.

During "The Hardest Part," drummer Will Champion played on stage while Martin sat in the crowd and played piano. The video projected had both heads superimposed in one screen, cheesy '70s-performance style.

This was Coldplay's first visit to St. Louis since 2005, when it played at the same venue and Rilo Kiley opened.

Personal Bias: My dad traveled from Cleveland to see the show with me. (Apple never falls far from the tree. And I don't mean Martin's kid.) He enjoyed it immensely and was really tickled that Coldplay gave away a free CD to everyone leaving. Coldplay in St. Louis: Dad-tested - and approved!