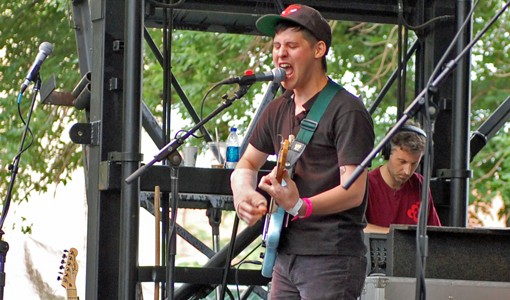 Wavves, the one-man recording project of 23-year-old California boy Nathan Williams -- managed to avoid much of the press attention so fervently sought by bloggers and photographers during this weekend's festivities.
First, Williams shunned most interview requests, as griped about by a few writers and photographers waiting to get up-close for his performance on Saturday. And as luck would have it, the portable barricade set up in front of one stage loosened from its moorings. The result could have been the iron fencing compacting the 100 or so photographers sandwiched between it and the stage. As such, security didn't allow a photo pit during Wavves' set.

All that mystery behind us, the songwriter came out and fooled some into thinking the opening riffs of "Nervous Breakdown" were just him warming up -- but nope, Williams opened with the Black Flag cover, then went into his own material, including a version of "Summer Goth 2," that sadly sounded much cleaner and nowhere near as lo-fi as the version of it on his LP, Wavvves. That's the result of festival stage sound-quality -- some things are lost on the professional stages of festivals.