Forty years ago in July, eight years before his death, Elvis Presley began a stand of 57 shows at the International Hotel in Las Vegas, a concert run that restored the King to a throne he'd spent most of the previous decade abdicating.

Yet, the image of Elvis in Vegas is largely misunderstood; over time, it's become a tableau of ersatz entertainment, a signifier for everything that went wrong with Presley, a distillation of what any self-respecting critic of rock & roll disdains.

Chris Isaak has a few things to say about that.

On Friday night, a massive LED backdrop, shaped like an amplifier and emblazoned with the title Silvertone--a catalog instrument line from the '50s and the name of the headliner's stalwart band--lit up the Pageant stage like a state-line casino. In case there were any doubts, the core of the original Silvertone--bassist Rowland Salley and drummer Kenney Dale Johnson--still backs the singer and still features three longtime friends: keyboardist Scotty Plunkett, guitarist Hershel Yatovitz and percussionist Rafael Padilla. From the off-the-rack blue Nudie suit to the upturned collar, the wireless rigs (Isaak fussed with his in-ear monitors all night) to the aforementioned LED billboard, no Vegas punches were pulled. The glitz was charming and old school; in other words, it was Elvis in Vegas glitz, the kind that reminds you why it's so seductive to begin with. Glitz is a massively entertaining fantasy. 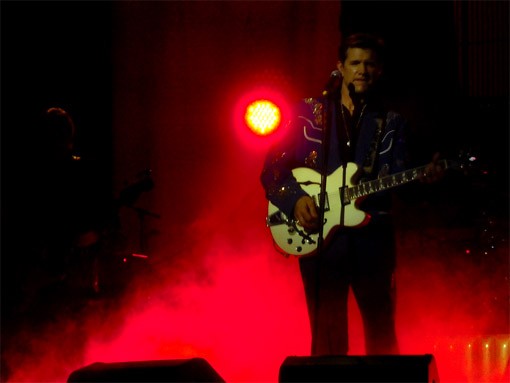 By the fourth song, Isaak grabbed a wireless microphone and roamed the floor, getting in a few twirls as he crooned the phrase "Solo tu, solo tu" from "Return to Me," and pausing to interview, cable-show style, a 12-year-old named Jessica. "We're going to have to revamp the show," Isaak joked. "This will be entertainment for the whole family--a trailer trash family." Then came the declarations of love from all corners of the packed house. "Keep talking baby, I'll find you," he growled. "We're six guys living in a tour bus. Be careful. You might wake up in the parking lot coughing up sequins." Or, shards of polished glass, as his astonishing end-of-the-night mirrored suit might have it.

The set cross-cut from vintage heart melters like "Let Me Down Easy," "Beautiful Homes" and "Don't Make Me Dream About You," (reimagined with three part gospel harmonies from the band) to some of the best material from this year's Mr. Lucky--though the great "Cheater's Town" was absent--an album that's been dismissed as a promotional vehicle for Isaak's retooled TV show on the Biography channel. To the contrary, it's a strong and surprisingly varied record, and Isaak seemed to have the most fun with the new material, even the deliciously lachrymose "Summer Holiday." Mr. Lucky can't even take a vacation without packing his bags full of masochism. On stage, with Yatovitz hamming up every solo and Salley mugging for the point-and-shoots all night, Isaak's signature pathos should have turned to bathos. But it never did, even when the full video for "Wicked Game" played behind him like a Viagra infomercial.

By now you're wondering when I'll mention the voice, as if it really needs further recognition. Very well. Chris Isaak is one of the few singers alive who can pull off, as he did last night, Roy Oribison's "Only the Lonely," (Orbison was his mentor after all, and remains his sonic wellspring), with note-for-vertiginous-note precision. He's also one of the few singers who could stake a claim to James Brown's "I'll Go Crazy" (but his lyric-flubbing attempt at "I Want You to Want Me" counsels against power pop). That voice is not just the production craft you've been hearing since his first album in 1985. It remains an unalloyed, unfaded force of beauty and expressiveness, just as Elvis's voice was. He swung, belted, rumbled, purred, and, yes, crooned so sweetly that for an hour and twenty minute set, half the homes from University City to O'Fallon threatened to fall to wreckage.

In other words, what happens in Vegas sometimes also happens in St. Louis.

American Boy
Mr. Lonely Man
Let Me Down Easy
Somebody's Crying
Return to Me
Beautiful Homes
Summer Holiday
We Let Her Down
Speak of the Devil
Wicked Game
Best I Ever Had
I Want You To Want Me (Cheap Trick cover)
Don't Make Me Dream About You
We Lost Our Way
Very Pretty Girl
Nyquil Blues (?) (sung by Kenny Dale Johnson)
Only the Lonely (Roy Orbison cover)
I'll Go Crazy (James Brown cover
You Don't Cry Like I Do
Baby Did a Bad Bad Thing