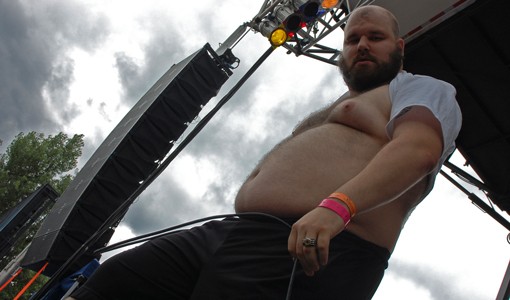 Toronto hardcore group Fucked Up, last in St. Louis in October, has been hitting the festival circuit hard and fast in 2009, zipping around the globe, meeting members of KoRn, and on Saturday, filling an afternoon time-slot here at Pitchfork Music Festival in Chicago.

(Interview with drummer Jonah Falco after the jump...)
After playing an intimate, sweaty set Friday night at Chicago's Subterranean, the six-piece took to the much larger stage about fourteen hours later, beginning with "Son the Father," the first song off its 2008 LP, Chemistry of Common Life. Midway through the set, singer Pink Eyes (singer Damian Abraham), recalled meeting Munky, a member of the preeminent late '90s band KoRn, while the two groups played a festival. The two crossed paths while Munky was wasted at a hotel there, said Pink Eyes.

"I guess you are a little better looking than KoRn fans," said the singer, who as he's known to do, made frequent jokes about his weight and back-covering body-hair.

Fucked Up's set clashed through its own style of punk/hardcore, and it might seem odd to long-time fans of the band, but the grooving, bass-line heavy "No Epiphany" caused dozens of joints to be fired up, including one approximately the size of a traffic cone, being puffed on by a group of teenagers in the middle of the crowd. Contact high!

Pink Eyes also took time to thank the long-time fans of the band, noting that Chicago was where they had their first "good" show early in its lifespan. The band finished with its first hit, the single "Police."