No Doubt's reactivation tour - the band was just on hiatus, so reunion tour isn't quite right - began with a grand flourish of movie-theme music. While a booming orchestra played, the four principle members walked behind a backlit white sheet, forming four looming silhouettes and drawing frenzied cheering. The sheet then dropped dramatically, and No Doubt launched into the spiraling pop-groove "Spiderwebs." 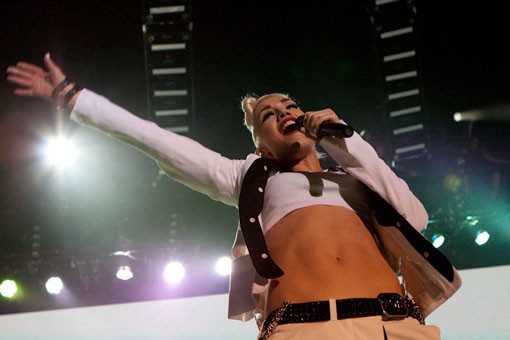 And for the next 90 minutes or so, it was like a time warp back to the good old days - well, sort of. For starters, a large chunk of the nearly sold-out crowd was too young to have seen No Doubt in the '90s (or on its last tour, for that matter). And the band isn't the scrappy bunch of ska/reggae-pop kids who toiled for years before striking multi-platinum with 1995's Tragic Kingdom. After all, when Stefani sang the "Simple Kind of Life" line, "I always thought I would be a mom," the crowd cheered and she smiled demurely in response - because she has two kids with husband Gavin Rossdale.

Still, looks- and moves-wise, it was like the band had been preserved in amber. Stefani wore her hair up in tight knots and sported a white cut-off tank top over a lime-green bra, exposing her killer abs. (She later sported a silver-and-black checked onesie/unitard/jumper outfit that was equally flattering.) Drummer Adrian Young one-upped her by simply sporting a pair of tighty-whities and high argyle socks. (Oh, and black lipstick, too.) Guitarist Tom Dumont and bassist Tony Kanal opted for all-white outfits and black shoes.

The space-age outfits matched the sleek stage, which looked like a mutant IKEA tchotke, with runways leading up to the drum riser and the tour's two auxiliary percussionists/multi-instrumentalists. This allowed the band to, well, dance like No Doubt. The leggy Stefani did calisthenics and aerobics, sometimes looking like a glittery ska-spider. Before "Just a Girl" she even dropped and did push-ups - many push-ups, with proper form. Kanal high-stepped as if he was walking on pillows, and not to be outdone, Young at one point stood up and shook his tush like a silly playboy. And of course, everybody skanked.

Musically, the band sounded great. Highlight "Excuse Me Mr." was slowed way down; its deep, grooving reggae gave it the feel of a Police tune. That song segued straight into "Ex-Girlfriend," which had tinges of spy-movie intrigue (and thus matched the video playing behind the stage). No Doubt's new-wave moments also smoked: "New" was a synth-pogo party; Tom DuMont's keytar(!) lines bolstered an electro-tweaked "Hey Baby"; and the soft-glow synthpop of Talk Talk cover "It's My Life" succeeded. Only a few songs - including Kingdom album cut "End It On This" and Nintendo-beats "Running" - felt a bit off. 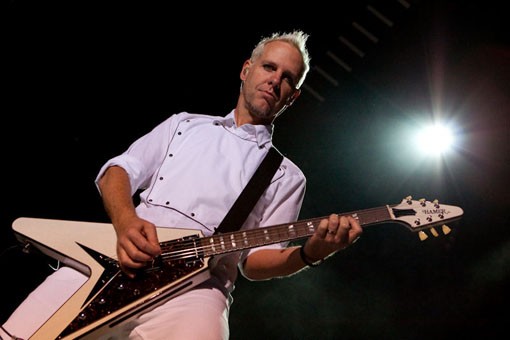 The only other possible blemish is that it sounded like Stefani couldn't reach some of the band's higher notes, meaning that she relied on backup vocalists to beef up the choruses. That's likely due to natural aging. But her voice - like Martha Davis of the Motels or Altered Images' Clare Grogan - has always made up in personality what it lacked in technical ability. Last night's version of "Don't Speak" - a song they've played hundreds of times before - was proof of that; it was emotional and felt entirely fresh.

By the time the set ended with a barn-burning "Just a Girl" -- Stefani asked "all the Missouri girls" to scream, and boy, they did - and the breezy blip-reggae encore opener "Rock Steady," everybody was in fine spirits. And then the band brought out drums and began banging on them - save for Young, who donned a tutu and marching toms for the occasion - and Stefani hollered, "Stand and deliver!" Cue a fun, kicky cover of Adam Ant's rhythm-heavy song, with special guests from opening acts Paramore and Bedouin Soundclash. 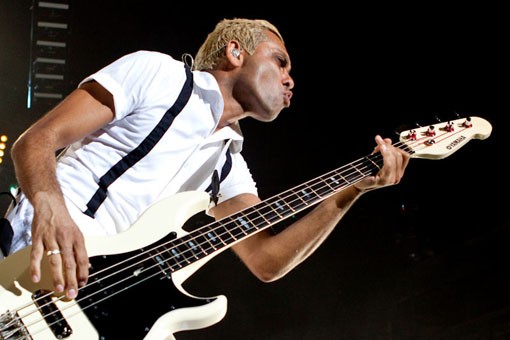 The weather was perfect, the tunes were fun, everybody was happy - and who could ask for anything more?

It's almost too easy to call opening act Paramore the hair heir apparent to No Doubt. After all, vocalist Hayley Williams is fond of dying her locks crazy colors, just like Stefani used to. (Last night she sported a brilliant tomato-red color.) But judging by the crowd's screams for the Nashville quintet, its popularity is close to rivaling that of No Doubt.

And the young band proved why, in a high-energy 50-minute set. The setlist stuck mostly to 2007's Riot!; standouts including the power-pop "That's What You Get" and a mellower take on the atmospheric new-wave "crushcrushcrush." New, equally power-pop song "Where the Lines Overlap," which saw Williams playing the piano at the end, bodes well for the group's September 29-released album, Brand New Eyes.

Although weaned on the Warped Tour, Paramore - like No Doubt - is much more than any narrow genre signifier. The band's sugary pop is diluted lightly with punk, rock, goth and even a bit of hardcore. (For trainspotters, bunches of the set reminded me of the Reputation.) It's also very indebted to the '90s: The strummy "When It Rains" has the same melancholy, breezy longing as Hole's "Malibu" and "Let the Flames Begin" was a smoldering, dark-rock number that ended in a light explosion and the entire band headbanging in unison. 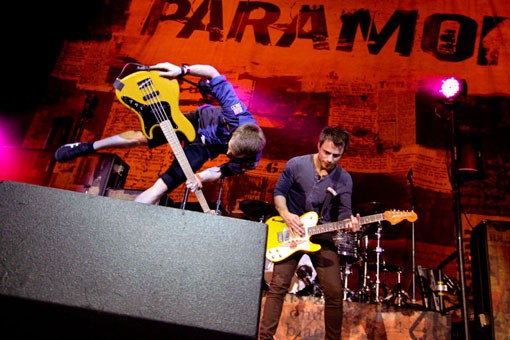 Bedouin Soundclash played a brief 25-minute set to open the night. Its breezy, Specials and Clash-inspired rock - bolstered by a sax and trumpet - was tight and entertaining.

Critic's Notebook: The cutest part of the night was when Stefani brought a fan onstage who was dressed just like she was in a mini, silver-and-black dress. The girl couldn't have been older than 8 or 9 -- and judging by the way the girl was crying, it wasn't planned. Aww.

Also impressive was the flip one member of Paramore did over the back of another - while playing.

By the Way: In about 2003 or 2004 or so, I saw Bow Wow Wow. Adrian Young was drumming for them. After the show, I saw him walking around the street near the club wearing a shirt that said, "No, I don't know where Gwen is."

Setlist - Paramore "Misery Business" "For a Pessimist, I'm Pretty Optimistic" "Pressure" "Ignorance" "crushcrushcrush" "When It Rains" "Where the Lines Overlap" "That's What You Get" "Let the Flames Begin" "Decode"