One of the summer's more anticipated shows happens tonight at the Firebird: Drone-metal legends Sunn O))). Paul Friswold interviewed the band Greg Anderson's this week. Here are some outtakes from the interview. 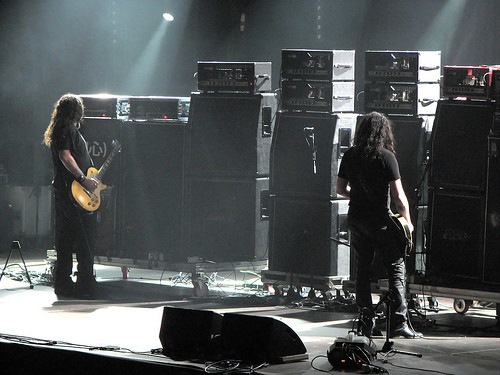 Paul Friswold: Who first thought of doing the album with the acoustic elements? Greg Anderson: It was actually something that myself, Stephen [O'Malley] and the engineer of the record, Randall Dunn, it's an idea that we came up with together. Stephen and I had kicked around different ideas of different things we wanted to do on upcoming recordings, and that was sort of the main things we wanted to tackle with this album, was to work with acoustic instrumentation.

Did you write a few, add synths, demo or jump in right away? We pretty much just jumped in. We did the record pretty much the same way we've done all our records, where Stephen and I do the basic tracking, laying the foundation so to speak for the album. Creating the pieces of music that other textures and elements and instruments and tracks will be added on to. So we had some conversations with Eyvind Kang about what we were going to do (laughs), and what we wanted to do. It was really sort of like, 'well, let's see what happens with the initial tracking, play it for Eyvind and see where we go from there. It wasn't conceived as an epic or grandiose 'BIG PLAN' where the picture was already painted or mapped out in our minds. We left it a lot more open than that, which is exactly how we've done with all our records. Luckily, we came up with tracking that Eyvind connected with.

Eyvind was really into what we were doing before. And we'd briefly worked with him on our last record, the *Altar* collaboration with Boris. He actually did some tracking on that for a Japanese bonus track, for the "Sinking Bell," he did a track that was heavily dominated by his viola and his playing. So it wasn't like we went into this cold. I think we were all on the same page, I mean, I have a lot of respect for his work and I think he likes what we do, and we had a lot of faith in working with him and handing the pieces over to him.

There was no demoing, if anything what Stephen and I created was the demo for him (Eyvind). He listened to what we track and composed a score for a string section, a brass section and eventually a choir section as well. We heard it as it was going along, but there was a lot of discussion, and a lot of him explaining to us what he wanted to do and how he was going to do it. And what he hoped the outcome would sound like. There was a lot of trust between the two parties.

The acoustic instruments vs. Sunn O))) seem like a strange idea on paper, but when I heard it, the combination made sense. It wasn't what I thought it would be, but it's awesome. To us, this is not crazy or left field at all. As a music fan, as a fan of all kinds of music . . . this record is embracing some other styles of music and different concepts that to the casual listener may seem strange, but to us it doesn't seem out of place at all. And that's what we try to do with the band: Do stuff differently each time, or embrace different styles and different ways of thinking and different ways of approaching music. That's a reflection of the music we listen to, and how we think about music and how we think about playing.

There's more instances of quiet on this album than others, more spaces that aren't quite as deafening. Yeah, I really like that effect. To me it's the old saying, If you want to make something louder, you put the quiet part before it. We've been working with that, experimenting with that, beating that idea to death. I also really like to have Attila's voice or what Steve's doing on keyboards or trombone featured more. We've sorta came to the realization a couple years back that the focus doesn't have to be on the guitars all the time, or guitar and bass. If you pull those back, lift 'em out and put the other things in the front, it can create this really cool dynamic, and give more depth to everything involved. I think when you start taking things away and bringing them back, or taking them away for good, the audience gets and impression of what that piece means to the overall picture in a better way. Like, they can see how the pieces fit together.

What do you think is Stephen O'Malley's greatest strength as a musician? That's a really hard question to answer. I used to think it was his influence and immersion in the black metal scene, and how he used that aesthetic and vibe of that had creeped into his playing. But now, it's more, he's a full-blown, really great graphic designer. He's an artist, you know? He's approaching music from a very different place than I'm used to and that I think most people are used to. He's approaching it from an artist's mind.

About myself, I always say I'm a fan first and a musician second. I really feel like my technical ability and how I approach music is really based more out of enthusiasm of other artists, not necessarily something that I come up with on my own. When Stephen and I play together, it's these different styles and approaches to music that create something that does stand on its own.

That's something that could be considered an embarrassing admission on my part, that the music I make without Stephen I consider to be pretty derivative of certain influences (laughs). That doesn't mean I'm not proud of things I've done out of this group, but I can definitely say that Sunn is in my opinion the most challenging and the most original out of anything that I've been involved with, and Stephen is a huge part of that. It's the chemistry of the two of us that creates that sound. I think the stuff that I write for Sunn now, and I hope that Stephen would say the same thing, the stuff we bring to the table is stained by the other person in some way.

What's your dream venue for Sunn O)))? (chuckles after a pause) This is gonna be such an anticlimactic response, and I don't know if any or your readers are going to understand it, but (sigh) there's a place in Seattle where Stephen and I grew up called the Moore Theater. It holds about 1500 people tops, and when we were growing up that was the place that if you played there, you were on your way -- you were special. And I saw so many great concerts there. I saw Metallica there in 1985 on the *Ride the Lightning* tour, I saw Soundgarden there right before they became gigantic, I saw King Diamond there! Different concerts in my life that were amazing or important in my life, and it's still there. It's kinda been this dream of Stephen and I to play at the Moore Theatre. (laughs) I don't have any Pompeii-esque places to list off.

We did a tour of Europe, and about half of the venues were churches -- that was a dream when we started, to play cathedrals. Back then, it wasn't going to happen, but now we can do it. The last show of the tour was in Prague, and we played in this amazing church. It was beautiful, the acoustics were amazing, but at some point I kinda forgot about the venue. It was more about the sound and the atmosphere of what we were doing. Not to sound egotistical, but it'd kinda of taken over. I mean, we use ridiculous amounts of fog when we play, so you can't see anything anyway (laughs). It's our preference to play different kinds of places. The music is different, how we're presenting it is different, and we want people to have an experience.

Aquarius Records mentioned in a review of one of SunnO)))'s earlier albums that they'd heard there was a Polish SunnO))) cover band called Moon. Is there really a Moon out there covering you? Actually, (laughs), yeah, we've heard of them -- I think they even emailed us. There was some guy who came to the Vienna show who said that he knew those guys really well, and he was passing on a message from them, saying "Hello." He gave us their contact information or whatever. Stephen and I talked about (laughs), we've never played in Poland and it's kinda on the top of our list of places we'd like to play, so maybe we'll run into them there, and maybe we'll play the show together. Stephen really wants to have them open, but I think it would be kinda silly, it'd be kinda redundant (laughs). The support acts or the groups we play with, we try to make sure it's interesting to the overall show. You won't find SunnO))) playing on one of those six or seven band metalfest tours, like The Unreadable LogoFest [Laughs]! We're not interested in that.